Silatronix, a UW–Madison spinoff that makes improved electrolytes for lithium-ion batteries, is among 102 companies highlighted in a new report from The Science Coalition.

The coalition is a non-profit, nonpartisan organization of the nation’s leading public and private research universities, including UW–Madison.

“American-Made Innovation Sparking Economic Growth” identifies 102 companies that trace their roots to federally funded university research. These companies are bringing to market transformational innovations in areas from healthcare to defense and are contributing to U.S. job creation and economic growth.

Madison-based Silatronix has more than 20 employees, and makes organosilicon materials that improve the safety and performance of lithium ion batteries. Founded in 2006, Silatronix received a total of $1.68 million from the National Institute of Standards and Technology and the National Science Foundation, the report says.

“Without federal funding we would never have been able to demonstrate the initial proof-of-concept and we would never have been able to survive through the long evaluation and testing time associated with this technology sector,” says Robert Hamers, a UW–Madison chemistry professor, who is co-founder and chief science officer of Silatronix.
The release of the report coincides with congressional consideration of funding for America’s science agencies as part of the annual federal budget process. White House budget proposals have recommended significant cuts to many science agencies and programs. However, each of the companies in The Science Coalition report, including Silatronix and another UW–Madison spinoff, are here today because academic researchers had access to competitively awarded grants from many of the very agencies that could see their budgets cut. 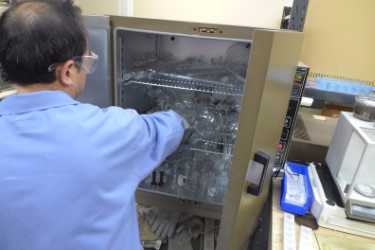 A Silatronix researcher at work at the company’s east-side Madison offices. David Tenenbaum

Silatronix arose from the research groups of Professor Robert West and Hamers at the UW–Madison; both had expertise in energy storage materials.  In 2006, a Phase I Small Business Innovation Research grant supported proof-of-concept. In 2007 the company was restructured as Silatronix, Inc., and received a Phase II award.

The award helped to provide the resources to synthesize and evaluate the electrochemical performance of Silatronix’ electrolytes for lithium-ion batteries, which power phones, computers and many other devices.  Silatronix maintains a close relationship with UW–Madison and has supported graduate students and postdoctoral research associates investigating fundamental chemistry of Silatronix’ new materials through sponsored research agreements and a facilities use agreement.

Additional funding from the Navy has been essential in launching Silatronix’ second generation of electrolyte compounds that provide enhanced performance and improved safety. After a long period of product testing and improvement, Silatronix materials have started to enter the marketplace with its first commercial product “OS3” now available commercially and in large-scale testing with the world’s largest battery manufacturers.

In addition, another UW–Madison spinoff company is listed in the Science Coalition report. Stratatech, based in Madison, makes skin substitutes for research and treatment of burns, wounds and complex skin defects. A total of approximately $110 million from various government entities (including the National Institutes of Health, Health and Human Services, Department of Defense, National Institute for Standards and Technology, Armed Forces Institute of Rehabilitation Medicine and Biomedical Advanced Research and Development Authority) helped fund the research behind the company, which was acquired by Mallinckrodt Pharmaceuticals in September 2016.

The company was founded in 2000 to commercialize an extraordinary discovery made at UW–Madison – a human keratinocyte cell line that reliably and repeatably produces living tissue nearly identical to native human skin. To date, clinical research shows that the skin replacement allows natural tissue healing and then sloughs off once its job is accomplished.

“Federal funding has been and continues to be absolutely essential to academic research, providing the foundation for groundbreaking therapies and product innovation that benefits everyone in this country and beyond,” says Dr. B. Lynn Allen-Hoffmann, Senior Vice President, Regenerative Medicine and founder and former CEO of Stratatech, a Mallinckrodt company, and a UW–Madison professor in the Department of Pathology and Department of Surgery.

The Science Coalition is dedicated to sustaining strong federal funding of basic scientific research as a means to stimulate the economy, spur innovation and drive America’s global competitiveness.

The Science Coalition Report and an online database, which provide profiles for each company and is sortable by state, university, funding agency, and type of innovation, is available at www.sciencecoalition.org/successstories.