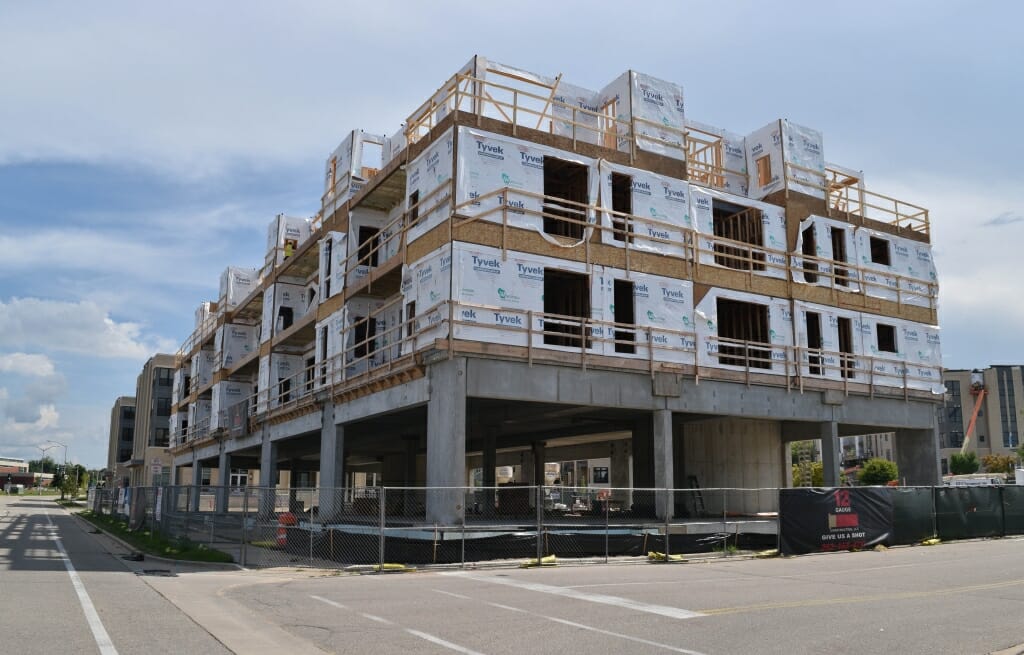 By the time a construction project becomes this obvious, it’s too late to get a building contract. Curate, a UW–Madison spinoff, is trying to change that. Photo by David Tenenbaum

Let’s say you’re a contractor, building for the mid- to large-size commercial and education market. To stay afloat, you want to get your foot in the door early in a building project.

But if your interests range from shopping centers and offices to schools and cross a three-state area, how do you catch wind of potential projects before they are cast in a formal “request for proposal,” known as an RFP?

Fulfilling that need is stock in trade for Curate, a Madison startup that applies artificial intelligence to data it mines from newspapers, websites and government documents. Although the company does not depend on intellectual property developed at UW–Madison, it would not exist without the university, which played central roles in preparing the husband-and-wife team that founded Curate in 2016. 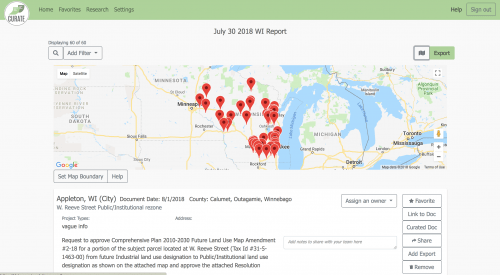 Sample Curate screen shows enough information to whet a contractor’s appetite and prepare to contact a developer. Users can filter information based on location and building type. Image courtesy of Curate

Curate produces a weekly summary of ideas that it culls according to the geographic area and building types specified by the client.

“Our sales pitch is, one, reliable data, two, timeliness, and three, understanding what happens in the market,” says co-founder Taralinda Willis, who became fascinated with building during construction of the new Union South. “Even before a big RFP is announced, discussions that are public, but not widely known, can be valuable.”

Curate is active mainly in the Midwest, and employs nine in offices on Madison’s Capitol Square.

The company’s fundamental technical challenge was to design a generalized system to seek and retrieve information in a structured manner, says fellow co-founder Dale Willis, Taralinda’s husband and chief of software development. “We need to squeeze the results into an Excel-type format; we don’t send out paragraphs.”

Curate’s curious computers use artificial intelligence to look for indirect indications of building plans, which requires considerable familiarity with laws, regulations and bureaucratic jargon in each of the six states where they currently operate:

Dale, a native of Sauk City, attended culinary school before deciding “it was not going to be lifelong passion.” His fascination with startups began after he entered UW–Madison in 2007 and began working with computer science professor Suman Banerjee on two startups.

Then he left his Ph.D. program to start Curate. “There is a ton of interesting information that lives in a vast range of sources,” he says, “but there are so many unique formats to the data, and they are not conducive to a generalized data-gathering approach.”

Dale was ideally suited to the intellectual and energy requirements of a tech startup, says Banerjee. “He’s very entrepreneurial, capable, and has a good skill set, and incredibly driven, very hard working. He’s always eager to learn and grow, so I’m absolutely not surprised to see how they’ve grown.”

Taralinda Willis, a native of Hudson, Wisconsin, heads Curate’s marketing efforts. She cut her teeth on the $100-million Union South project on campus, when an employee’s sudden departure put her in the position of handling relationships with contractors. “I took calls from vendors who were trying to bid on pieces of the project, but many of them were really late in the process. I recognized that there was a real problem in how people receive construction information in a timely, reliable fashion.”

Taralinda, who followed that experience with a master’s in business administration at UW-Whitewater, says relationships are cardinal. “In construction, things are always going wrong, and so you need to be working with someone you trust implicitly. Good construction firms understand that, so the focus is not about the sale, it’s about building relationships, getting to know the potential client. And so even if the contacts we facilitate do not bear fruit in the short term, our customers tell us they may get a call on a subsequent project.”

Already, using the same type of artificial intelligence that powers its building-tips business, the company has started CurateLocal, which is devoted to data-mining for other purposes: in this case, realtors in Washington state. “Realtors are heavily impacted by local ordinances,” says Taralinda, “and large change can affect their members, so we created Curate/local to address that need with AI.”

In high tech, quick changes in technology, opportunities and markets entail continual updating of the product, says Taralinda. “We will never be satisfied with the state of the product. We at Curate are used to rapid technological change; it’s our daily life, but it’s not necessarily the daily life of people in the construction world, and so we need to continue helping people understand how to use Curate as we make the incremental changes that keep us up to date and useful.”

Even though the digital domain seems dominated by businesses that have figured out how to prosper with “free” services, Dale wanted to take a more traditional approach: customers who were willing to pay. “One of the biggest things I learned is the incredible importance to building a product that people want to buy. And that raises a series of questions: Who are we targeting? Why are they going buy? How can we get someone to pay?”