Induced pluripotent stem (iPS) cells are among the most important tools in modern biomedical research, leading to new and promising possibilities in precision medicine. To create them requires transforming a cell of one type, such as skin, into something of a blank slate, so it has the potential to become virtually any other kind of cell in the body, useful for regenerative therapies for everything from heart disease to diabetes. 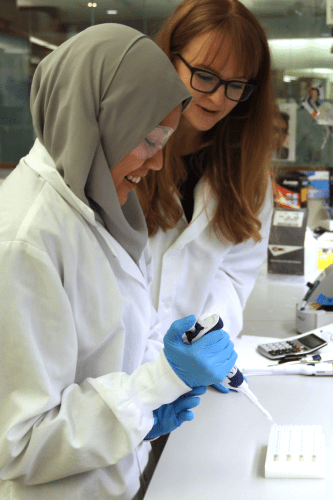 However, current methods to induce pluripotency are inefficient: In a batch of 100 cells slated for reprogramming, only five or so complete the transition. A new study published today [May 7, 2019] in Cell Reports by a team of researchers at the University of Wisconsin–Madison’s Wisconsin Institute for Discovery (WID) and School of Medicine and Public Health could improve that efficiency.

It describes combined laboratory and computational methods that lead to better completion of pluripotency, a faster process, and improved understanding of how cells become reprogrammed from one cell type to another, for instance, transforming a skin cell to a cardiac cell. And it includes some surprises, the authors say.

“The cells undergoing reprogramming do not have to do so in a stepwise manner,” says graduate student Zafirah Zaidan, one of the study’s lead authors.

Traditionally, scientists thought certain steps must occur sequentially during reprogramming. This was based on measures of gene expression across entire populations of cells at various time points, leading to average expression profiles for the whole group. They thought that for a cell to be successfully reprogrammed, the ­genes that code for the specific functions of the differentiated cell (skin) must be suppressed, or “turned off”, before researchers could turn on their ability to become the new type of cell (cardiac).

But when study leader Rupa Sridharan, a professor of cell and regenerative biology at WID who studies the epigenetics of cell fate, began to examine single cells at a time, a technique known as scRNA-seq, her research team found that individual cells can activate properties of pluripotency without shutting down their differentiated features. In other words, a skin cell doesn’t have to completely give up being a skin cell before it can begin the journey to becoming a cardiac cell.

Sridharan’s team worked with algorithms developed by co-author Sushmita Roy, professor of biostatistics and medical informatics at WID, to perform the analyses. Roy is an expert in using statistical computational methods to identify regulatory gene networks, the collection of genes and the molecules that modify them that interact during development, cell differentiation, and in response to environmental clues.

“scRNA-seq is revolutionizing biology and is opening up a lot of opportunities to gain a high-resolution view of gene regulatory networks,” says Roy.

The insight allowed the research team to spot differences emerging between individual cells, which Roy says is only the beginning. The tool can be applied to other, similar biological questions, such as understanding how functional cells become tumorous.

“There is a lot of room to develop the right type of computational tools to fully unlock the potential of these single-cell RNA-seq datasets,” she says.

Meanwhile, Sridharan says that cells that can turn on pluripotency without shutting off their differentiated features may be good candidates for completing the transition. Focusing on such cells may be a path to greater efficiency.

Her lab has already had success using drugs that help overcome barriers to efficient reprogramming by modulating signaling and other gene regulation pathways. These include a new cocktail of small molecules that can jump-start the cell cycle in iPS cells, helping them arrive more quickly at their new fates. The study finds this can increase the success rate to around 40 percent and shorten the time scale of induced pluripotency.

Sridharan says that adding molecules that down-regulate differentiation features could further improve efficiency, though the study did not test this. Profiling the epigenome at the single-cell level will allow her to determine which genes are poised to change expression before that expression even begins.

Roy’s algorithms also gave insight into how the regulatory networks change as the chemical cocktail changes. Identifying what small molecules to add next may be the key to unlocking further gains in efficiency. By combining laboratory and computational tools, Sridharan asks: “Can we rationally come up with what that molecule should be?” The answer might shape the future of regenerative therapies and precision medicine.