When Milton Pettit Griswold entered the University of Wisconsin, fighting in World War I had been going on for slightly more than a year — yet that was overseas, and in Madison, students were content to immerse themselves in as many academic and social pursuits as time would afford.

The year was 1915, and Griswold was a cadet in the university’s naval science program — a naval aviator — who was studying to become a mechanical engineer.

However, circumstances changed and Griswold never actually received his degree. 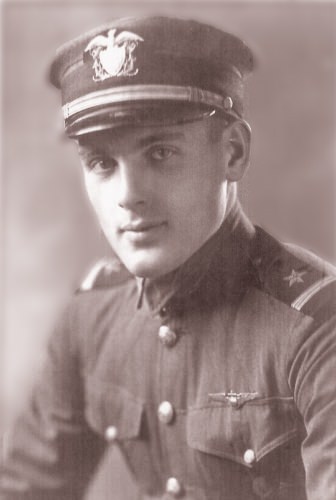 Griswold spent his childhood in Wilmette, Illinois. His father died when Griswold was 14, and a few years later, aiming to take advantage of a free university education for Wisconsin residents, Griswold’s mother Caroline moved to Madison with him and his younger brother Henry.

Griswold was quiet, intelligent and highly respected. A recommendation on his university application includes an apt description: “… a very serious minded student of fine ambition.” Indeed — in his first semester on campus, Griswold’s courses included Chemistry, Mechanical Drawing 3 and 4, General Lecture Engineering, Shop 2 and 3, and Spanish 2, as well as military drill and the requisite physical education course.

Outside of the classroom, Griswold joined the Wisconsin Engineer magazine staff, pledged the Psi Upsilon fraternity, was elected to the military honor society the Sword and Scabbard, and was invited to the Iron Cross, one of the university’s most prestigious honor societies. He regularly attended social dances and as early as November 1915, met Lucile Yates, whom he ultimately would marry.

In his junior year, Griswold’s courses consisted of Aeronautics, Steam & Gas Engines, Wood Inspection and ROTC. Within the naval science program, his focus was naval aviation, and he had become a captain of cadets in the First Battalion, Company D. He was chairman of finance for the Officer’s Military Ball, which during the war was held in place of the junior prom.

In March 1918, he enlisted in the Navy as an aviator, and in May, at the conclusion of his junior year at the University of Wisconsin, he reported for duty as Ensign, CQM (Chief Quarter Master) to the Boston Navy Yard for, as his orders stated, “duty instruction in heavier-than-aircraft.” Because of his experience in the Naval Science program, the Navy needed him to help train fighter pilots.

When World War I ended, Griswold remained on active duty until April 1919. He returned home, still a member of the naval reserves. In June 1920, he married Lucile, and they moved first to Kenosha, Wisconsin, and then to Santa Monica, California. He became a successful petroleum engineer and he and Lucile had four children — all of whom attended Stanford University, two earning engineering degrees, also from Stanford.

Most likely, when Griswold returned to Wisconsin after the war, he believed the university would award him a bachelor’s degree in mechanical engineering — and with good reason. Quite simply, the university pledged that it would issue ‘war credits’ to anyone who had served in the war. In December 1917, the university regents approved the Regents War Credits, stipulating: “Seniors in full and regular standing who shall have enlisted in or been drafted into the army or navy of the United States or its associates since the close of the last academic year shall be granted at the next commencement their appropriate degrees in course in the respective colleges of the university.”

Griswold had, indeed, fulfilled the requirements of his degree, yet during his lifetime his petitions to the university for it went unheeded. He died in 1954.

Sixty-one years later, his granddaughter Loralee Kendall succeeded; her master of liberal arts thesis, “Some Dance: The College Years, 1915 to 1919,” about her grandparents’ University of Wisconsin years, provided unequivocal documentation that Griswold deserved his degree.

And at the university’s spring 2016 commencement ceremonies, Griswold’s grandson Jack will receive that degree — the 1919 Regents’ War Degree — on behalf of the Griswold family. Jack will attend the College of Engineering Graduate Recognition Ceremony and walk across the stage in the company of modern-day mechanical engineering graduates.

Griswold’s name is listed in the honor roll on page 372 of the university’s 1920 yearbook, the Liberty Badger, along with 4,000 students who served in World War I.