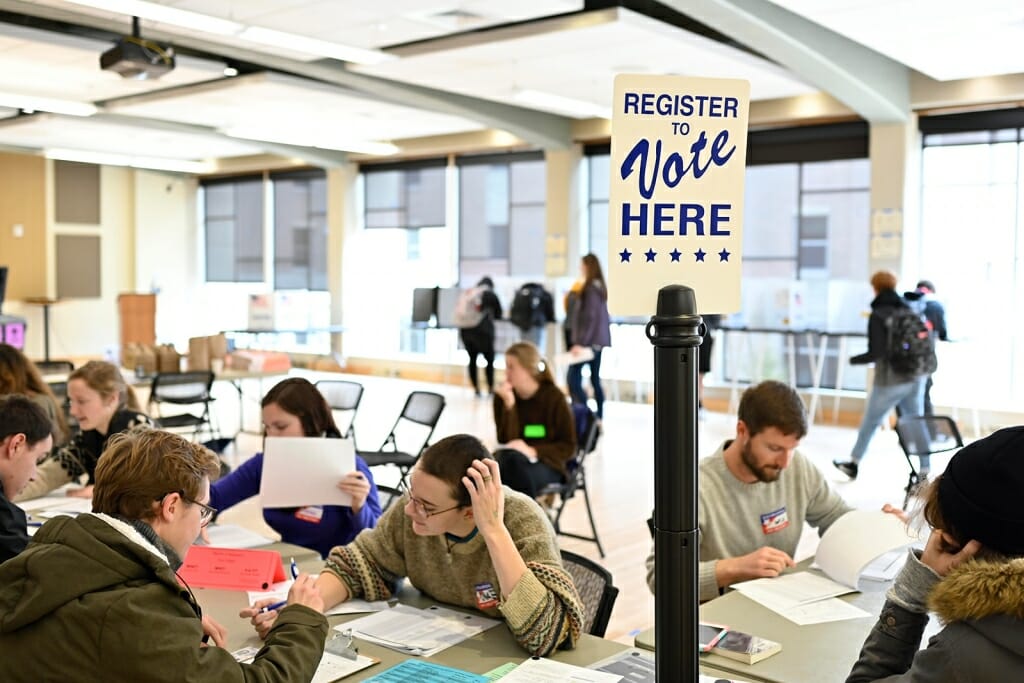 Students register to vote before filling out midterm election ballots at the Frank Holt Center on campus on Nov. 6, 2018. Photo: Jeff Miller

University of Wisconsin–Madison students achieved the second highest voter turnout among the 14  member institutions of the Big Ten Conference in the 2018 midterm elections, according to the newly announced results of the Big Ten Voting Challenge.

UW­–Madison’s turnout increased to 52.9 percent in 2018 from a rate of 35.6 percent in 2014, thanks in part to university-led efforts to encourage voting. The full campus report can be viewed here. In addition, at the 2019 ALL IN Challenge Awards Ceremony, UW–Madison received a platinum seal for achieving a student rate above 50 percent. Only three Big Ten Schools – Minnesota, Wisconsin and Northwestern – achieved that. 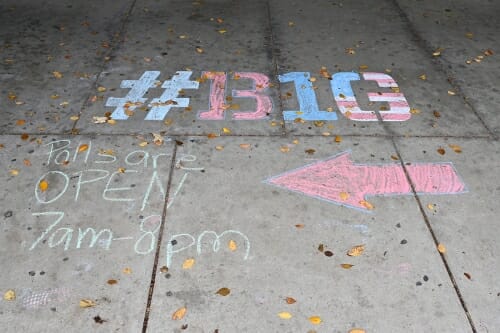 “I’m delighted that our students have shown that they recognize the important of civic participation in our democracy,” said Chancellor Rebecca Blank. “One of the pillars of the Wisconsin experience is purposeful action, the ability to work for the common good.”

Launched in 2017, the Big Ten Voting Challenge is a nonpartisan initiative created to spur civic engagement and encourage more students across the Big Ten to head to the polls on Election Day.

An estimated 7.5 million students across the country voted in 2018 midterms, according to data from the National Study of Learning, Voting and Student Engagement at Tufts University.

As a result of the increased voter turnout, the 14 presidents across the Big Ten Conference have agreed to continue the challenge for the 2020 presidential election.

“This is an incredible example of the power of our students to increase student representation at the polls and use their voice to help shape our collective future. Voting in elections gives our students a voice in the democratic process and in the decisions that affect local, state, and national issues,” says a letter signed by all Big Ten university presidents and chancellors.

At the University of Wisconsin, student voting turnout efforts were coordinated by a partnership between the Madison City Clerk’s Office, Associated Students of Madison, the Morgridge Center for Public Service, University Communications and a number of other campus units.

“We’re pleased that UW–Madison students recognized the value of voting, and responded so well to the Big Ten Voting Challenge efforts,” said political science professor Barry Burden, the faculty chair for UW–Madison’s Big Ten Voting Challenge Committee. “We hope to get even more students out to vote in the 2020 election, and to encourage a culture of student engagement.”

Led by the Ginsberg Center at the University of Michigan, the challenge awards two campuses for their student voting efforts: greatest student voter turnout, and most improved turnout between elections. The inaugural challenge focused on the 2018 midterm election in comparison to the 2014 midterms.

The University of Minnesota led the conference with the greatest overall turnout of student voters at 59 percent, up 29 percentage points from nearly 30 percent in 2014.

“This remarkable outcome can be attributed to the collaborative work of a hard-working and dedicated civic engagement coalition of campus administrators, faculty, and students and the commitment of the university to create a campus culture supportive of civic learning and engagement,” said Elizabeth C. Matto, associate research professor and director of Center for Youth Political Participation at Rutgers University.

For the 2020 challenge, the presidents and chancellors across the Big Ten Conference have again each pledged $10,000 to be used on their respective campus to promote student public engagement.

According to the NSLVE, voter turnout at the more than 1,000 institutions participating in the study increased by 21 points from 19 percent to 40 percent.

The ALL IN Campus Democracy Challenge is a nonpartisan, national initiative recognizing and supporting campuses as they work to increase nonpartisan demcoratic engagement and full student voter participation. The Challenge encourages higher education institutions to help students form the habits of active and informed citizenship, and make democratic participation a core value on their campus.

Launched in 2013, the National Study of Learning, Voting and Engagement is a service to colleges and universities interested in tracking their students’ voter registration and turnout rates in national elections. With more than 1,000 campuses enrolled, it also serves as a national database for research on college student voting, political learning and engagement in democracy. NSLVE is a non-partisan initiative of the Institute for Democracy and Higher Education (IDHE), also housed at Tufts University.