With support from the National Institutes of Health 2022 High Risk, High Reward New Innovator Awards, University of Wisconsin–Madison biochemistry professors Ci Ji Lim and Amy Weeks are pursuing some of their most unconventional ideas about repeating DNA sequences and the way cells reorganize proteins as they receive signals from outside their walls.

More than half of the human genome is made up of repetitive sequences of DNA. Lim studies telomeres, repeating sequences of DNA that appear at the ends of chromosomes, including how telomeres are maintained and organized and how they replicate. 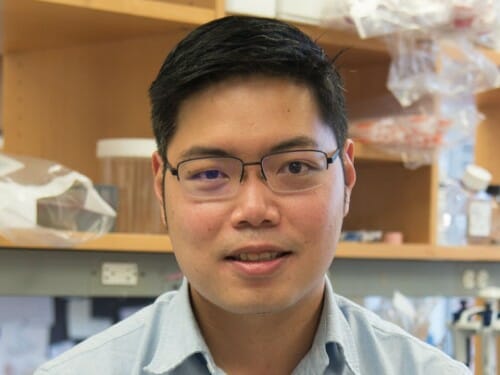 According to Lim, research suggests that telomere length is only one variable that scientists might consider in their quest to understand health, disease, and basic telomere-related biological functions. How certain proteins bind along this repetitive DNA sequence could have important implications that scientists don’t yet understand.

“It’s time we have an impression of what the distribution of proteins along repetitive DNA sequences are, and how this changes over different telomere states. Currently, it’s a black box,” Lim says. “The tools we will be developing, together with others, could breach this barrier and allow us to understand this system, synergizing an entire field of chromosome biology research at repetitive genomic sequences.”

Using the gene-editing tools and advanced DNA sequencers, Lim plans to study the arrangement of proteins along telomeres to understand whether their location and order are important.

“I think this work could provide the missing connection between past studies that use overly simplified telomere systems and the complex protein-DNA interactions that are happening at telomeres in cells,” Lim says.

Weeks’ research group draws from diverse disciplines, including protein engineering, chemical biology, cell biology and proteomics — the study of large sets of interrelated proteins — using a host of different tools and technologies, to map the dynamics of proteins in humans and how these proteins respond in time and space to signals from outside cells. 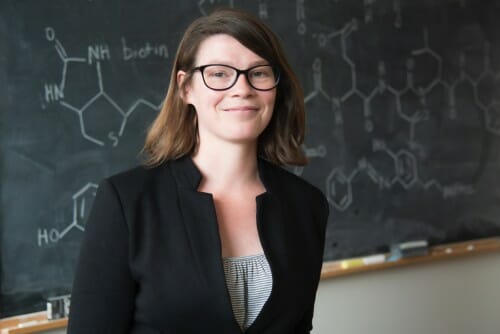 A subset of her research involves deciphering the biological functions of post-translational modifications, which are the chemical changes that reprogram how cells are organized after a protein has been produced. These changes happen on a continuum of time scales, on the order of seconds to days depending on the biological signals involved.

“I think you’ll hear some people in the cellular signaling field say that many post-translational modifications are just bystanders, that they don’t have an important function. I don’t think that’s true,” Weeks says. “I think it’s analogous to back when the human genome was first sequenced. People used to say that 90% of the human genome was junk DNA, and now we know that’s not true. I think something similar is true of these protein modifications.”

Once developed, Weeks’ tools could help scientists understand how proteins move between compartments in cells in response to the signals they receive and how that relates to function.

Grants to Lim and Weeks are among 71 researchers receiving New Innovator Awards this year. The awards, created to support unconventional approaches to major challenges in biomedical and behavioral research, provide as much as $1.5 million over three years for unusually innovative research done by early-career investigators.

Read more about the New Innovator Awards on the NIH website.