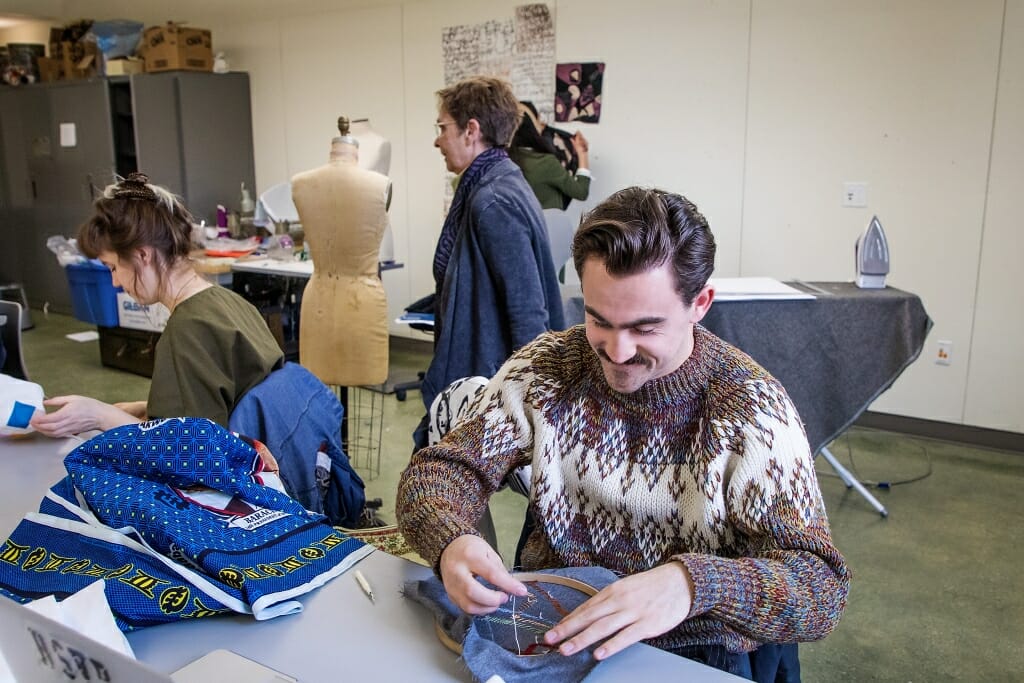 Griffin Claes, a junior majoring in textile and fashion design, embroiders a garment during a “Structural Enrichment” class at the UW–Madison School of Human Ecology. Claes and three of his fellow students recently took home major awards in a national fashion and design competition, extending a Badger winning streak. Photo: Hyunsoo Léo Kim

The inventory, while exquisite, didn’t speak to him.

“It’s a brand my grandmother loves, but it felt stuck in time,” says Claes, a University of Wisconsin–Madison junior from Chicago majoring in textile and fashion design. “They had nothing for my age or aesthetic.”

The experience led directly to his entry in a prestigious national competition for college students sponsored by the YMA Fashion Scholarship Fund. Claes created a detailed plan to freshen the Hermès brand. He envisioned a campaign of pop-up shops around the globe featuring limited-edition collections designed by up-and-coming artists embodying each city’s culture.

For more than a decade, UW–Madison has been preparing students to enter the annual awards, considered the fashion industry’s premier competition for gifted young designers, merchandisers, retailers and business majors. Year after year, Badgers win. And win big. 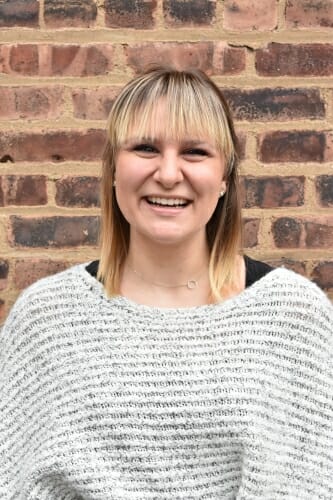 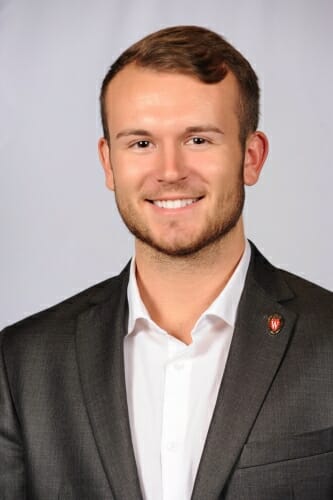 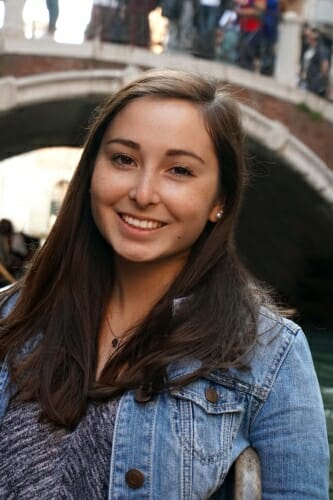 About 200 prizes are awarded by the scholarship fund each year, chosen from nearly 600 submissions. Competition is fierce. Badgers go up against 64 other member colleges, including powerhouses such as the Wharton School, Harvard University, the Rhode Island School of Design, and Parsons School of Design, where the TV show “Project Runway” was filmed for many years.

“UW–Madison has an incredible track record of success,” says Soyeon Shim, dean of the UW–Madison School of Human Ecology, which houses the Design Studies Department and the Kohl’s Center for Retailing. “Fashion is a global industry of about $1.75 trillion, more than music, books and films combined. In the United States, it provides about 1.8 million jobs. We are laser-focused on graduating students well-prepared to succeed — and lead — in this industry.”

Each year, students who enter the competition tackle a retail challenge. For 2018, they were asked to design a hypothetical apparel line and create a “curated in-store experience” that would drive foot traffic to a brick-and-mortar retailer of their choice.

Applicants don’t physically produce any garments. Rather, they make their arguments through research, sketches, storyboards and marketing plans. For UW–Madison students, entering is voluntary. Their work — often 100 hours or more per entry — is done outside of class but with weekly guidance and feedback from faculty members.

On campus, the effort is facilitated by Assistant Professor Marianne Fairbanks, Associate Lecturer Holly Easland, and Jerry O’Brien and Danielle Croegaert, executive director and assistant director, respectively, of the Kohl’s Center for Retailing.

Students fare best in the competition when they pair a personal passion with a creative idea, Fairbanks says.

For senior Adina Barrientos, that meant joining two of her loves — outdoor recreation and environmentalism — with a desire to educate the next generation of conscious consumers. Her winning entry, a clothing collection for Patagonia called “Climb On,” encourages children ages 6-12 to explore nature while learning about sustainability and ethical sourcing. Her clothing line would be made from organic fibers and recycled materials.

Senior Keira Hockers of Green Bay, Wisconsin, tapped into the non-binary zeitgeist with her entry, envisioning a collection of genderless clothing for Urban Outfitters. The tagline: “For you, me, and everyone in between.” 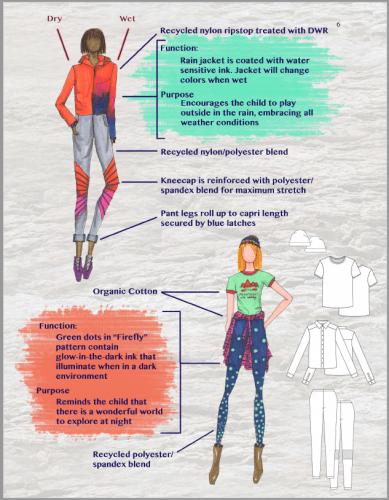 A page from the winning contest entry by Adina Barrientos shows sketches of the hypothetical clothing collection she designed for Patagonia.

Senior Brian Lucksinger, a marketing and entrepreneurship double-major from Hudson, Wisconsin, won with a plan for Barneys New York. His idea curates and promotes existing inventory in a way that emotionally leverages a customer’s self-expression and identity, such as being vegan or a member of the LGBTQ community.

“I think one of the reasons our students do so well in this competition and in the job market is that our program is very forward-focused,” says O’Brien, of the Kohl’s Center for Retailing. “We’re used to thinking about where the industry is headed. We ask the big questions.”

The four winning students recently picked up their awards at a glittery New York City gala attended by industry leaders and celebrities. Christian Siriano, a “Project Runway” winner who went on to design gowns for Lady Gaga and Michelle Obama, gave the keynote address.

“There were some very big names there,” Barrientos says. “They make you feel like you’re at the top of the design world.”

UW–Madison’s Design Studies Department works hard to forge national and international networking connections for its students, Fairbanks says. Participating in the YMA Fashion Scholarship Fund competition is one example. As students prepare their entries, they get periodic feedback from an industry expert. The current industry mentor for UW–Madison is Jeff Manby, executive vice president and general merchandise manager for Kohl’s.

“This is the fashion industry putting its support and financial resources into nurturing the next generation of designers,” Fairbanks says. “It serves companies by giving them access to the best and brightest, and it serves our students by giving them exposure to the highest levels of the industry.”

Hockers is spending her final undergraduate year at the Fashion Institute of Technology in New York City, an opportunity available to seniors in the program through an application process. As she studies alongside fashion and design students from across the country, Hockers says her experience in the UW–Madison program is serving her well.

“UW­–­Madison is such a large university, but they keep the program small so that you have easy access to everything — sewing machines, looms, studio space,” she says. “It’s a well-rounded, hands-on program, so you learn all aspects of creating a garment.”

Learning how to create a conceptual sketch, engineer a pattern, and make a garment allows UW–Madison students to think and communicate about fashion in a deeper way, says Easland, who teaches fashion illustration and apparel design and worked for many years as a designer for Lands’ End and American Girl.

“Our students actually create clothing from start to finish,” Easland says. “When you know the process intimately like that, it increases your scope as a designer and helps make you more fearless.”

“We’re not all pushed in the same direction,” she says. “The professors see what intrigues us, then help us pursue it.”

Barrientos got a big contest-related surprise following the gala. She was awarded an additional $5,000, for a total of $10,000, for having the highest scoring case study from UW–Madison. The extra $5,000 scholarship was established by the YMA board to honor Peter Sachse, a past president of YMA and a former executive with Macy’s. He is a UW–Madison alumnus, and the award goes only to a UW–Madison student.

The New York City trip also proved especially lucrative for Lucksinger. At a separate ceremony, he was awarded $15,000 for finishing second nationally in the Next Generation Scholarship competition sponsored by the National Retail Federation.

Lucksinger found himself seated next to the CEO of Macy’s at the federation banquet. Shaquille O’Neal dined at a table nearby.

“I’m six feet, four inches, and I’ve never felt short until I stood next to him,” Lucksinger says. “The people I bumped elbows with was absolutely crazy.”

Post-graduation this May, Lucksinger will begin work as an assistant buyer for Macy’s in New York City. As he’s mingled with the industry’s biggest names, he’s come to fully appreciate the value of the degree he’s completing, he says.

“Google, Facebook, Amazon — they’re all just as interested in hiring us as the more traditional retailers,” he says. 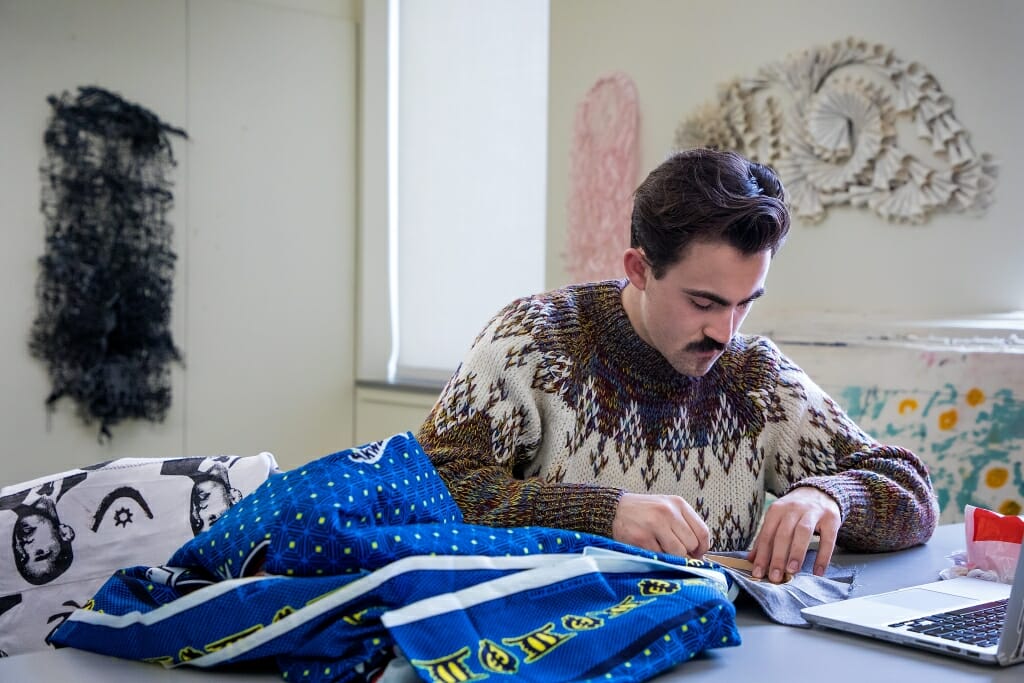 For Griffin Claes, fashion design as a career wasn’t on his radar until a fire destroyed his family’s suburban Chicago home as a teenager. Having lost everything, he realized the powerful emotions we attach to clothes, like the items his fellow students on the high school track team donated to him to help him rebuild his wardrobe. He sought a profession that was creative and meaningful and found it through the Design Studies Department at the UW–Madison School of Human Ecology. Photo: Hyunsoo Léo Kim