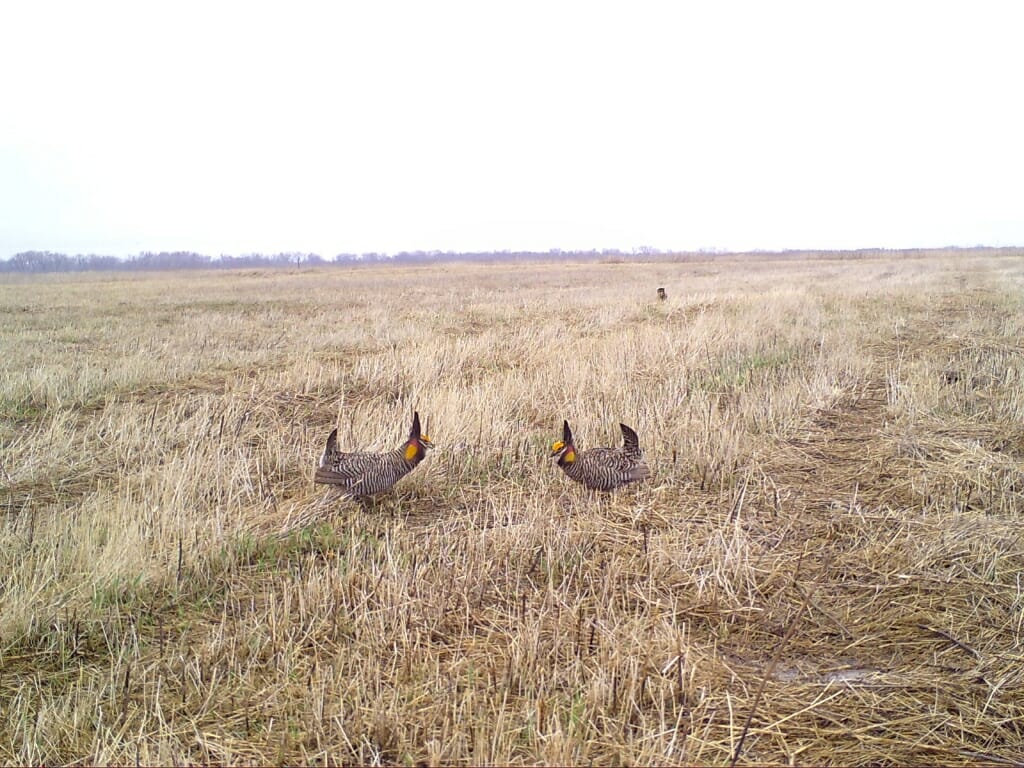 Two prairie chickens make their way through a field, as seen on an Adams County trial cam. 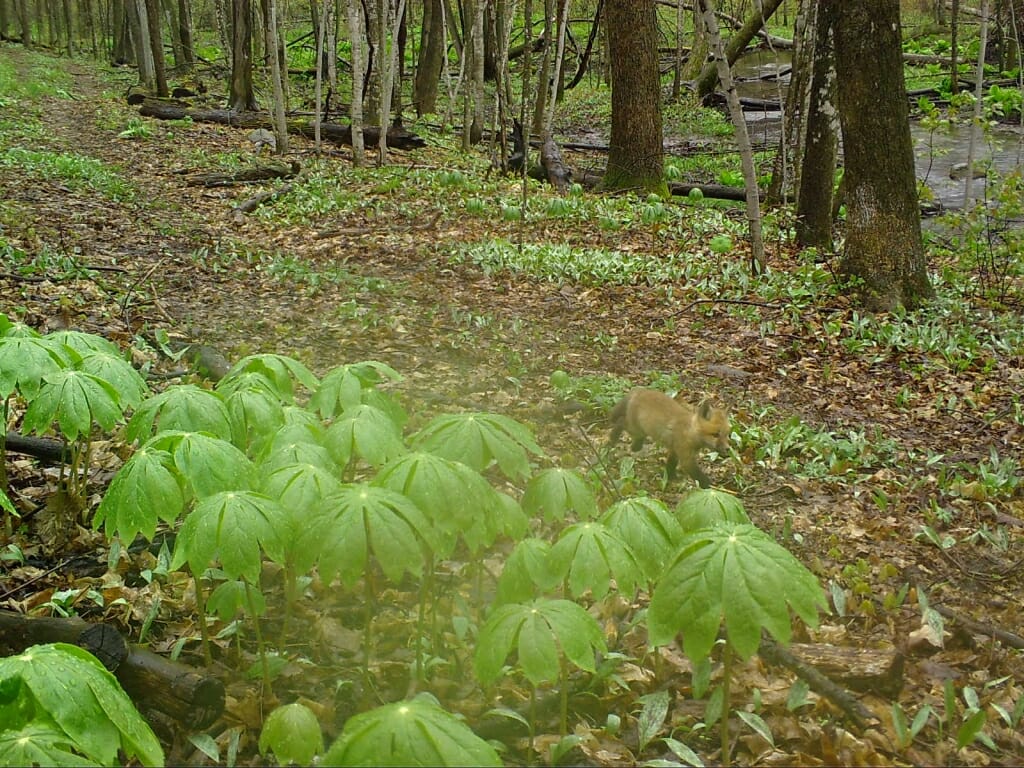 A baby fox darts by a Dodge County trial cam. 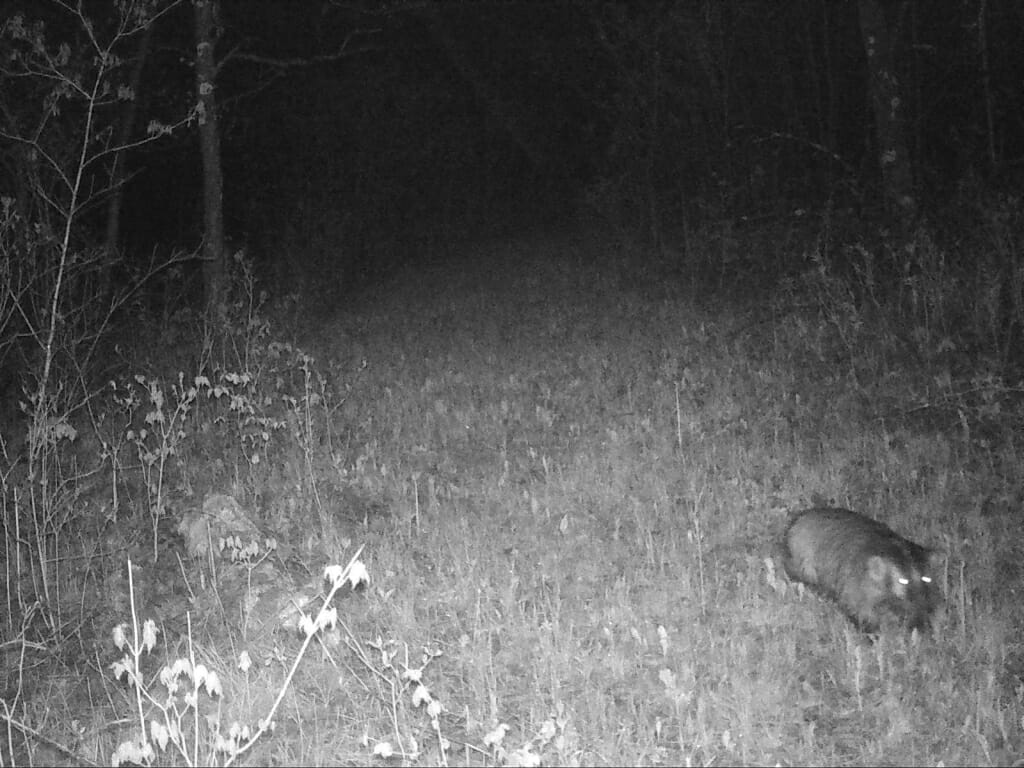 A badger was seen at night on a Jackson County trail cam. 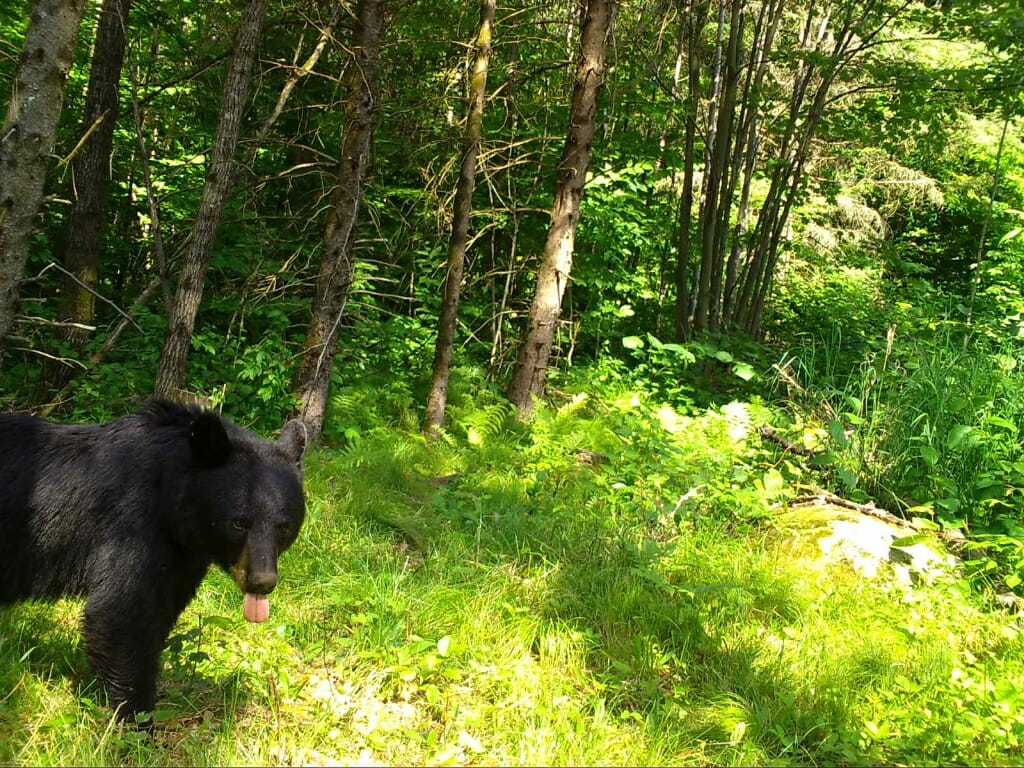 This curious bear stuck out its tongue at a Sawyer County trail cam. 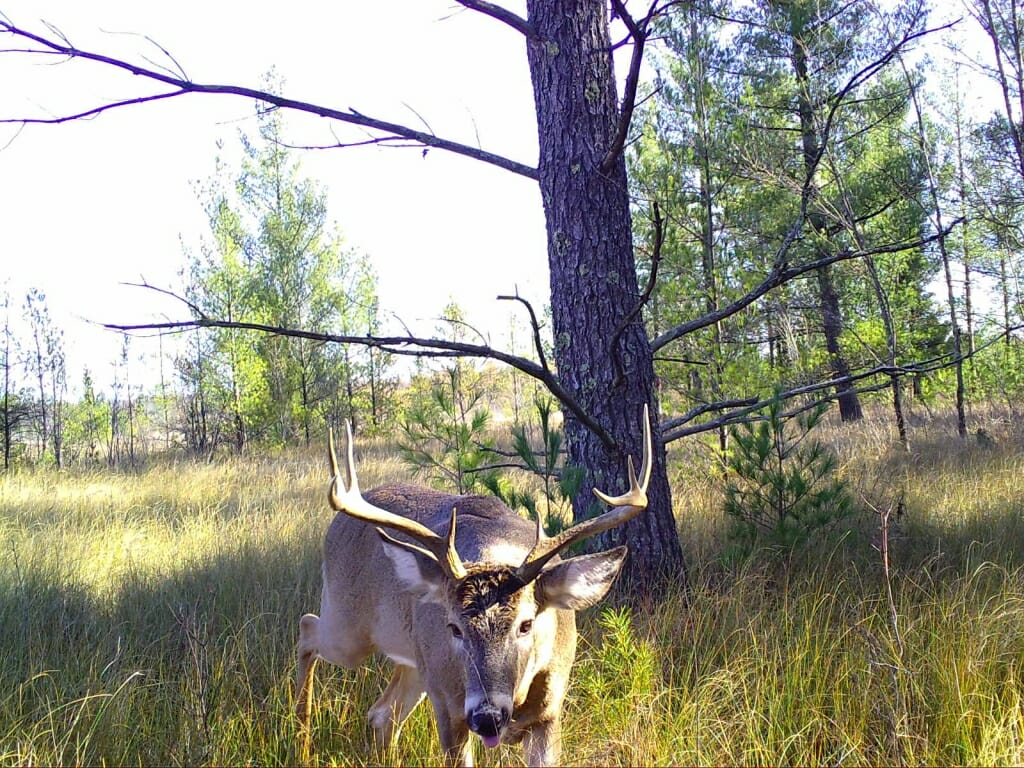 A whitetail buck, as seen by a Jackson County trial cam. 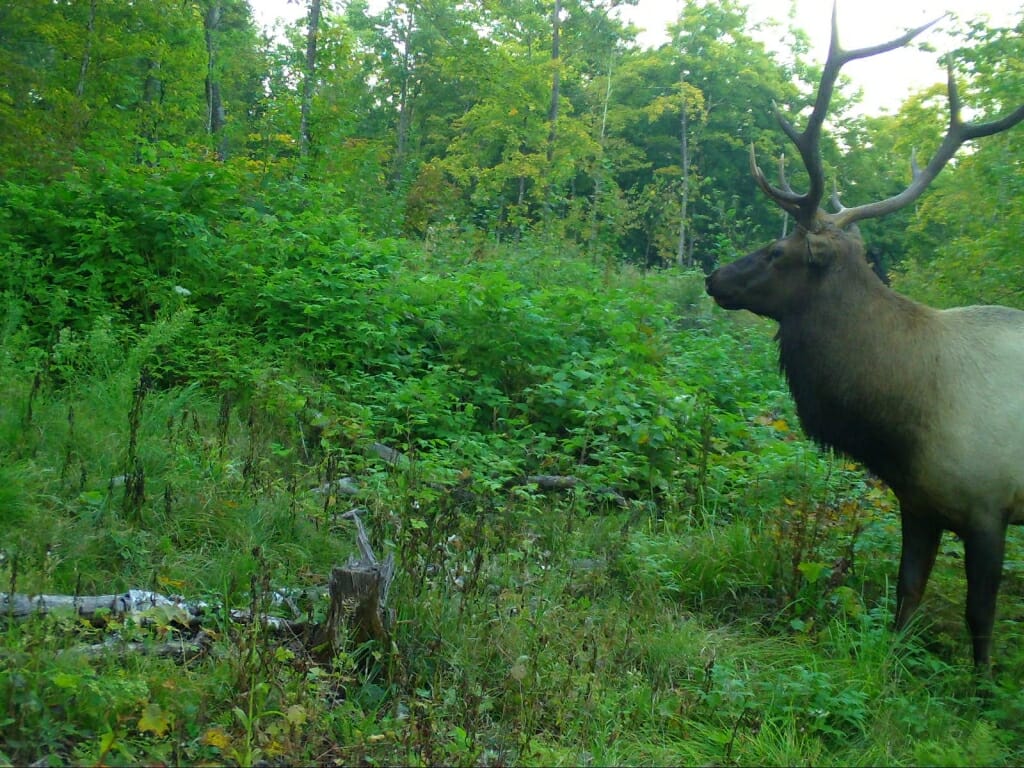 A bull elk was seen on a Sawyer County trail cam. 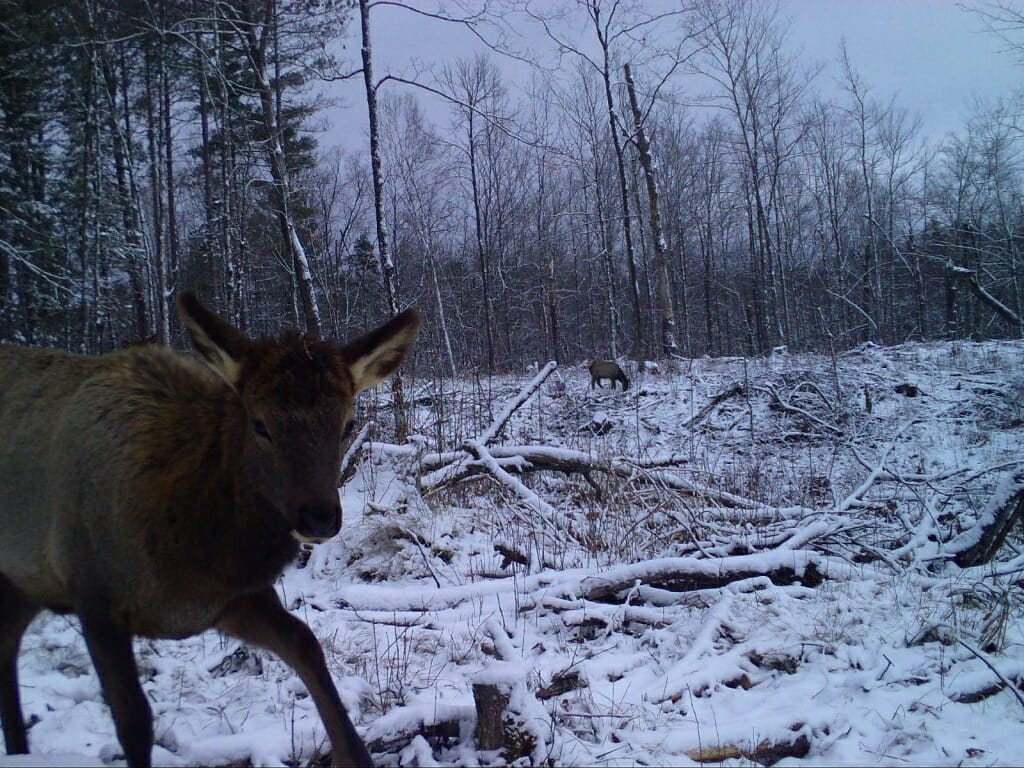 An elk calf was seen by a Sawyer County trial cam. 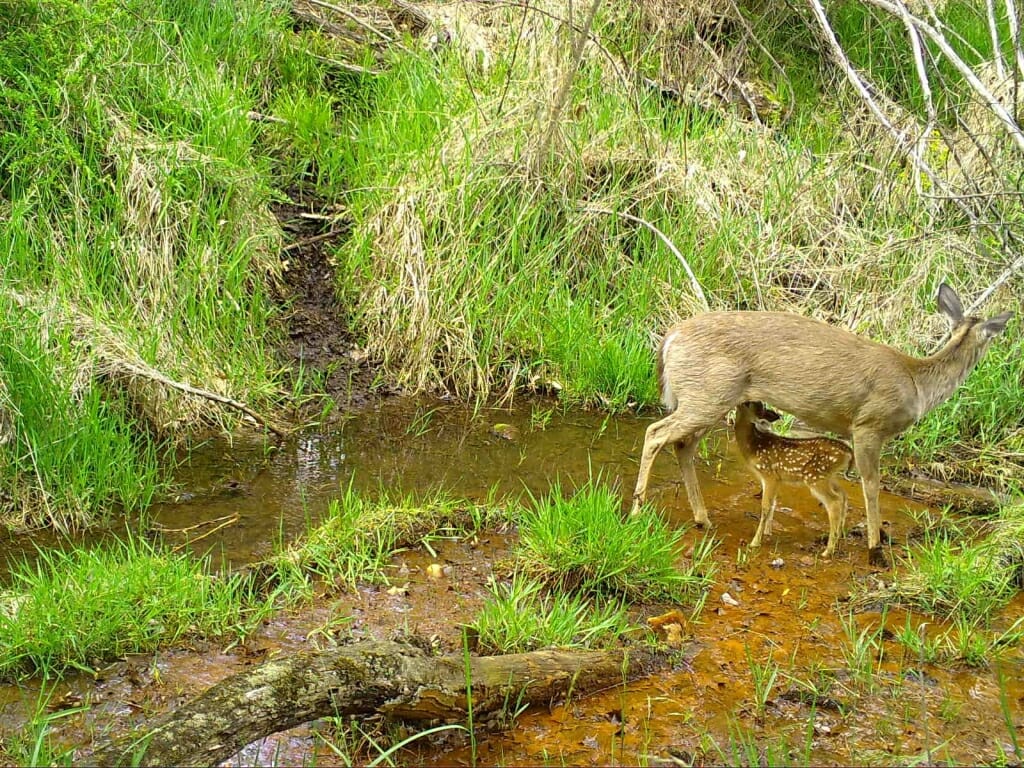 A fawn nursing was seen by a Waupaca County trail cam. 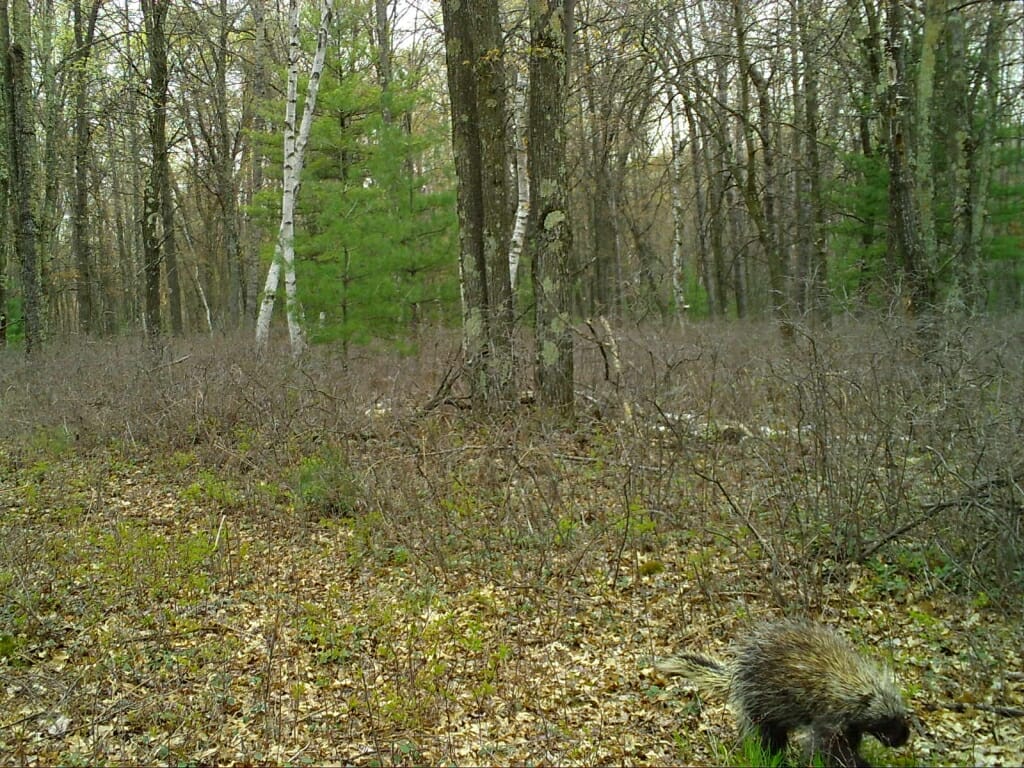 A porcupine was photographed by a Jackson County trail cam. 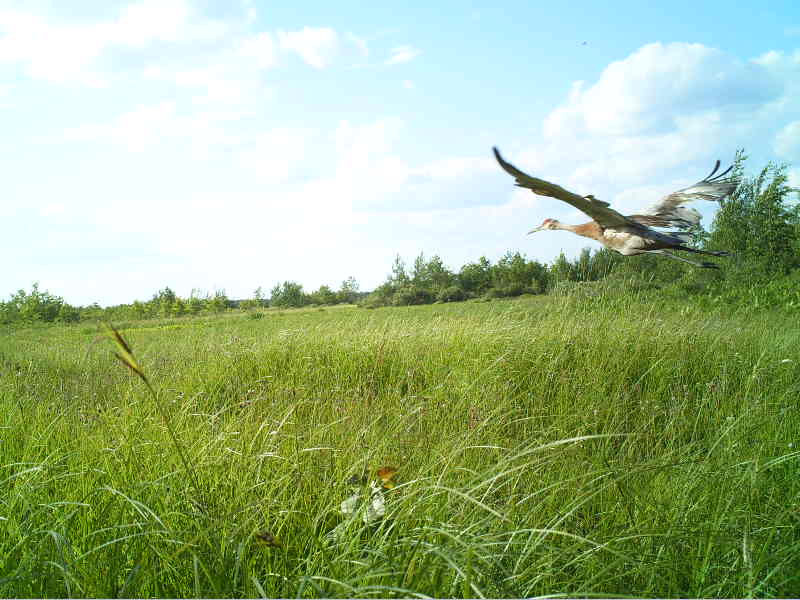 A sandhill crane in flight was captured on a Jackson County trail cam. 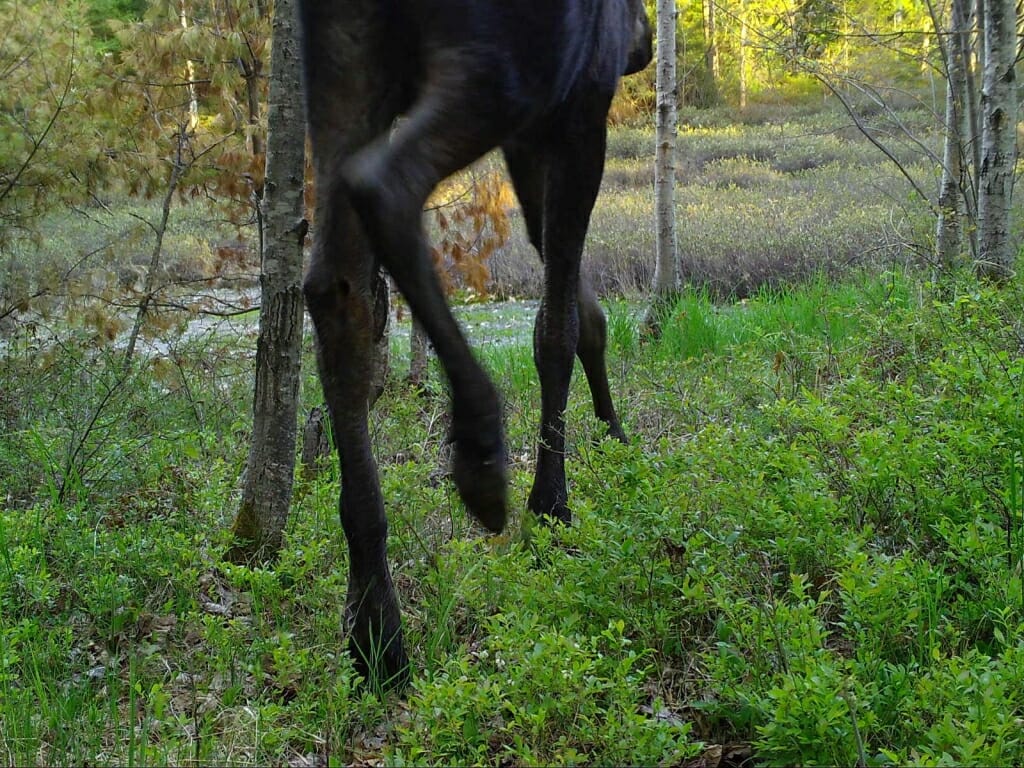 A moose in Vilas County -- the first moose seen on the Snapshot Wisconsin trial cams. 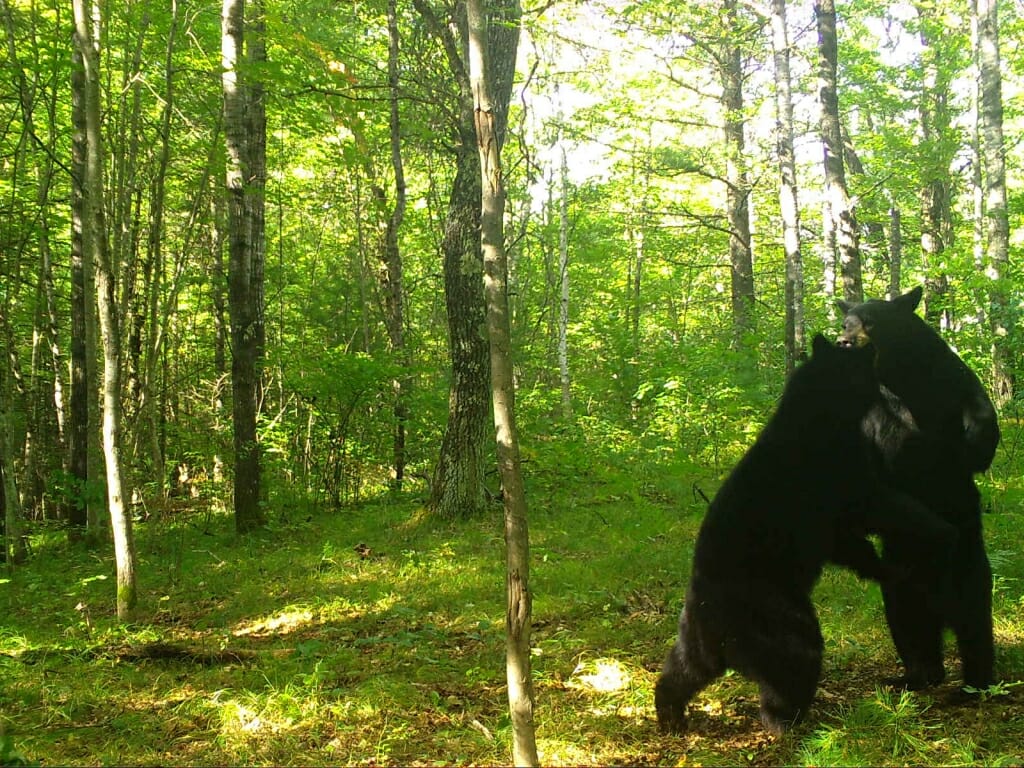 Two bears wrestling in Marinette County, as captured on a trail cam. 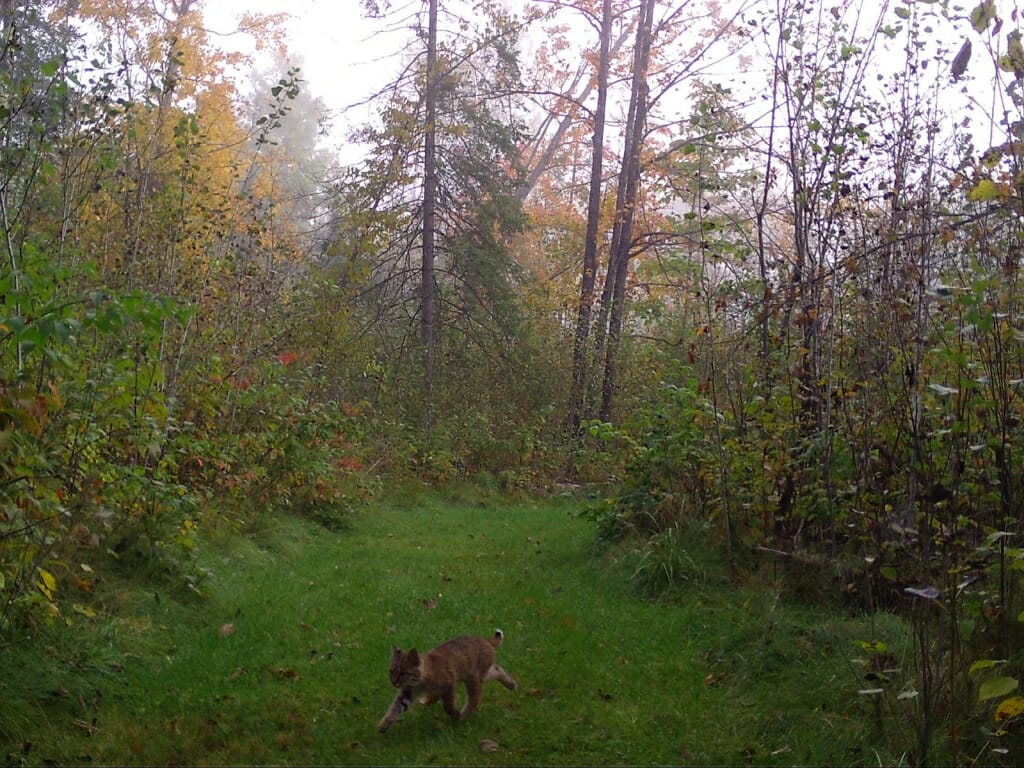 A bobcat kitten in Sawyer County, as captured by a trail cam. 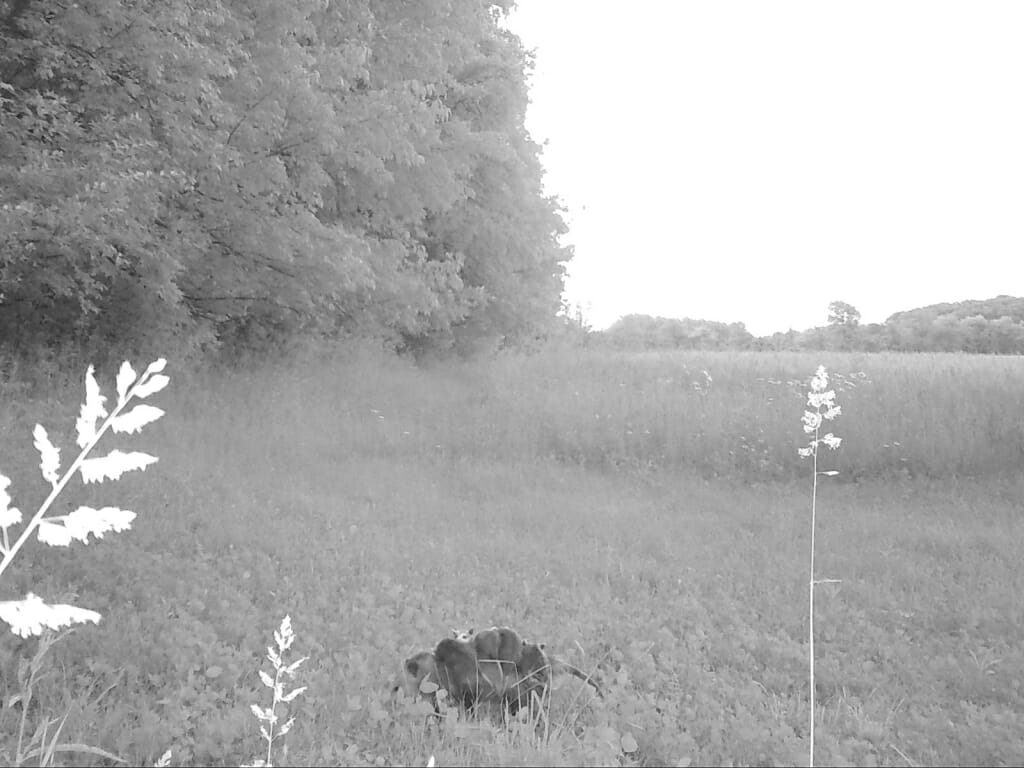 An opossum, with her young, in Racine County, as captured by a trail cam. 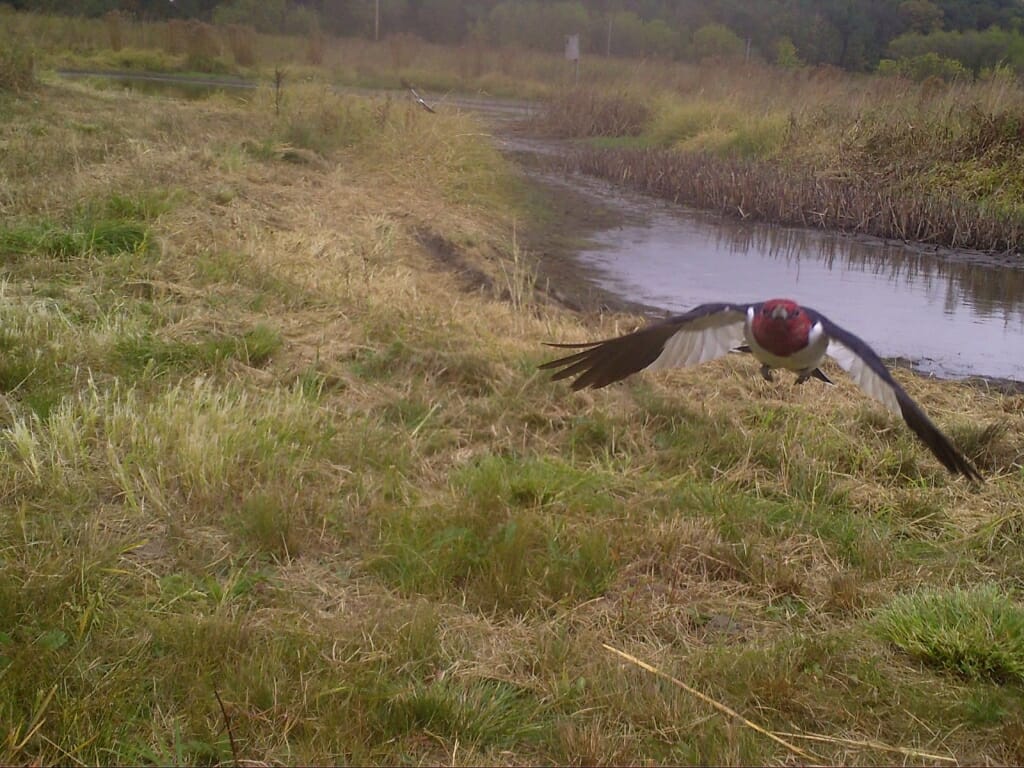 A red-headed woodpecker in Iowa County, as captured by a trail cam as part of Snapshot WIsconsin.

Two years after the volunteer-run wildlife monitoring program Snapshot Wisconsin started rolling out, this innovative project is going statewide. Starting Aug. 9, the Wisconsin Department of Natural Resources invites volunteers from all 72 counties to apply to run a trail cam in their part of Wisconsin, and will allow the cameras to be hosted on public land for the first time.

New volunteers will join more than 1,000 existing trail cam monitors around the state who keep their eyes and cameras on animals from bears to badgers and fishers to foxes. More than 22 million photos have been collected, and some 6,000 online volunteers have classified one million of those images through the citizen-science website Zooniverse.

“We’ve been focused primarily in forest areas, and that’s great,” says Ben Zuckerberg, a professor of forest and wildlife ecology at the University of Wisconsin–Madison and a research partner in Snapshot Wisconsin. “Now, statewide rollout opens up a whole new realm of questions for looking at different kinds of species in areas from agricultural regions, to forests, to areas with more of a human footprint.”

The DNR uses the trail cam data to model deer and their predators and to provide recommendations to county deer advisory councils. Zuckerberg, UW–Madison Professor of Forest and Wildlife Ecology Phil Townsend, and their graduate students are developing improved wildlife population models using data they could never hope to obtain from traditional wildlife surveys that take place a few times a year.

“With standard survey techniques, we’re usually just getting a snapshot of wildlife,” says Zuckerberg, pardoning the pun. “But with Snapshot Wisconsin, we can begin to capture data across an entire year.”

“This is important,” echoes Phil Townsend, “because now we can understand how wildlife populations and behavior change with the seasons and in different types of landscapes that might not previously have been monitored.”

That’s because the trail cams are always operating, providing a constant survey of their part of the state. Volunteers are asked to check the cameras at least four times a year and upload the images to the DNR’s website. There, any pictures of humans are removed, and then volunteers help categorize each species.

“We see the project as a success already,” says Jennifer Stenglein, the project lead at the DNR.

Stenglein and program coordinator Susan Frett are expecting the statewide rollout to welcome a greater diversity of trail cam monitors across the state, particularly by permitting volunteers to monitor trail cams on public lands. Previously, the DNR sought private landowners with access to at least 10 acres, reducing the number of eligible volunteers. The DNR trains new volunteers in person in collaboration with UW–Extension and is developing improved online training for those who can’t attend a live session.

Every county already hosts at least one trail cam, in part because teachers could apply to manage a camera outside the 26 counties officially part of the program until now. The new goal is to place at least 20 cameras in every county, a density that will ensure sufficient coverage for much of the wildlife population modeling work the cameras support.

In the project’s first two years, the cameras have already provided new insights into wildlife. For example, the weasel-like fishers have been spotted in Marquette County, further south than ever reported previously. Plus the first moose (or its knees, anyway) recently made an appearance on camera. And the project’s useful data even extends beyond wildlife. Townsend is combining the trail cams’ daily pictures of their surroundings with satellite data to assess seasonal changes, such as the leaf out of vegetation in the spring, and will use the imagery to map expected wildlife distributions with changes in the seasons.

The official data is still in the draft stage but will eventually be made public, providing even more opportunities for researchers.

“Getting the data these volunteers collect out there will be amazing,” says Stenglein.