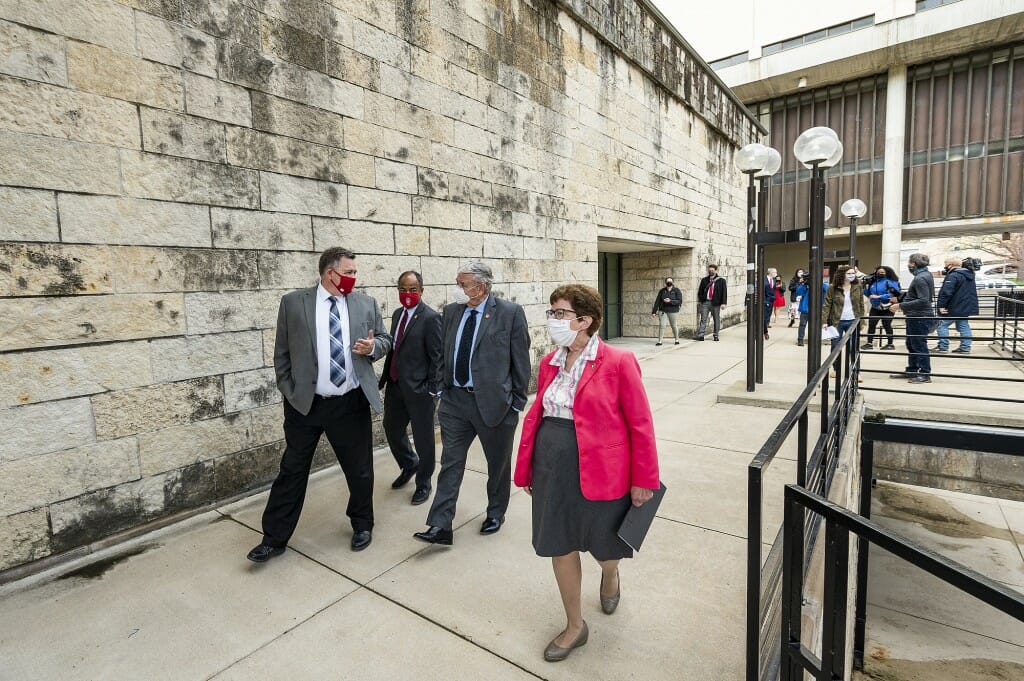 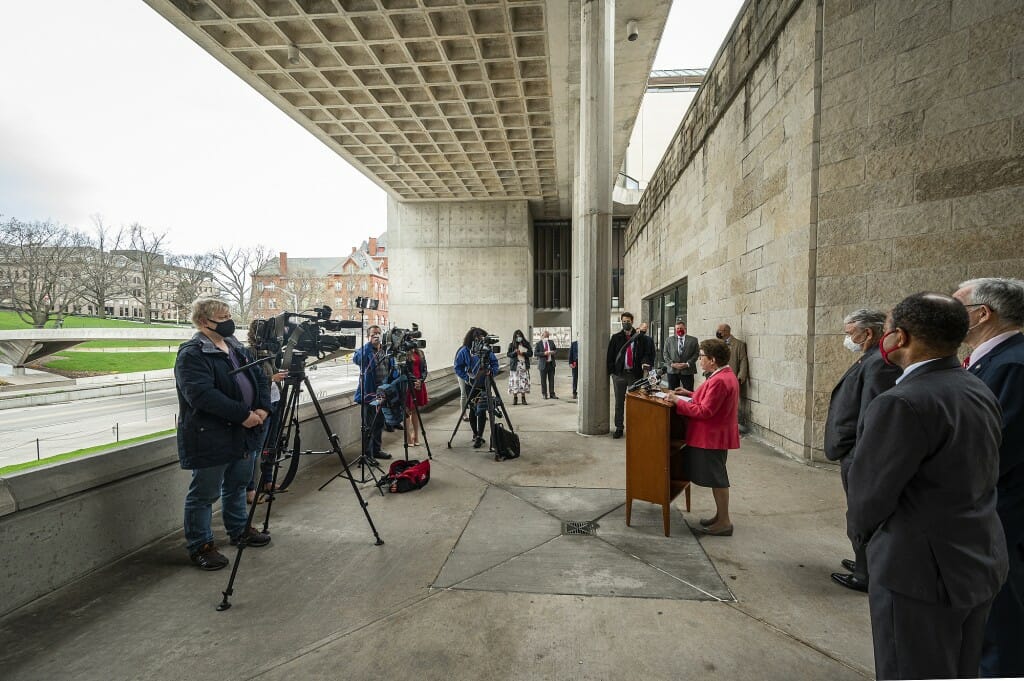 Blank speaks to the media about the need to fund capital building projects on the UW campus following a tour of the Humanities Building. Photo by: Bryce Richter 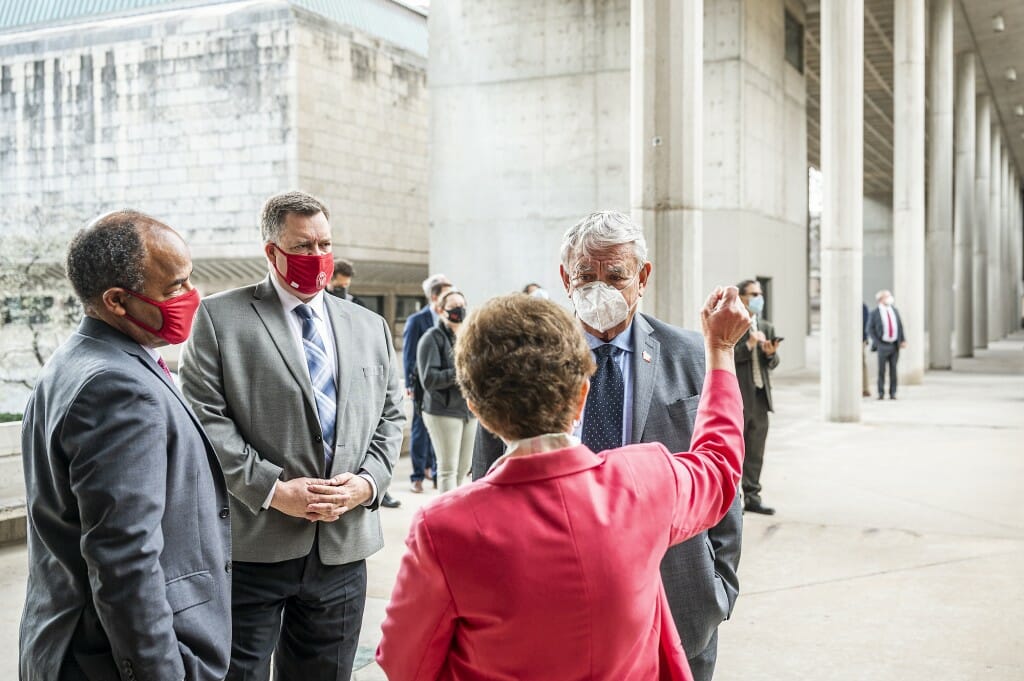 Blank (back to camera) speaks with Thompson (right), along with Wilcots and Bruhn. Photo by: Bryce Richter 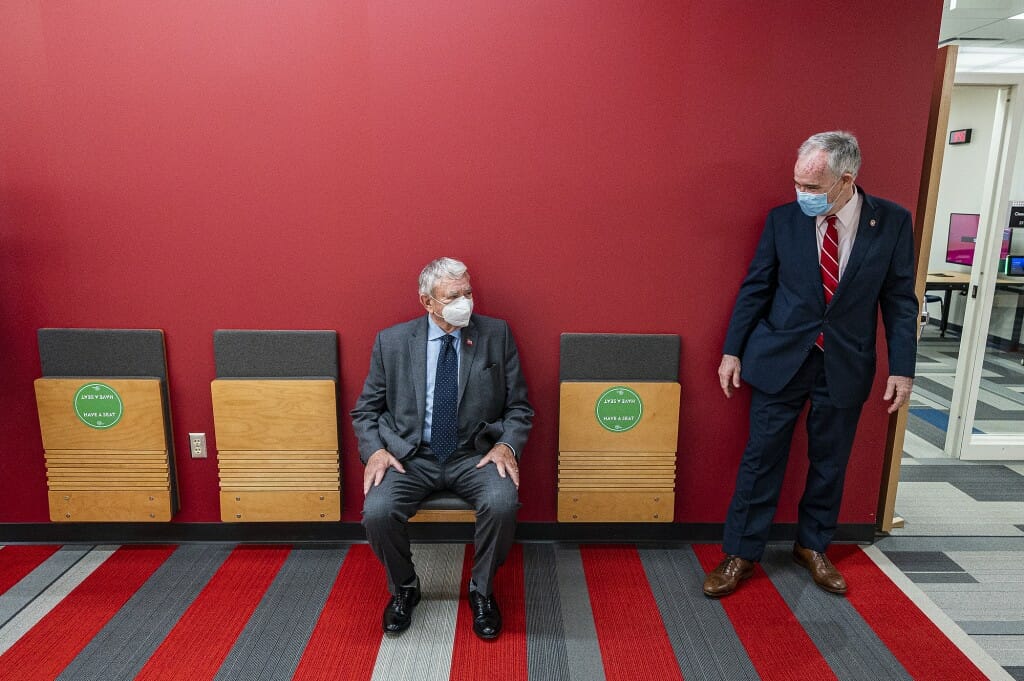 Ian Robertson (right), dean of the College of Engineering, talks with Thompson (left) as he leads him on a tour of the engineering campus. The tour highlighted recent renovations in Wendt Commons, such as the fold-down hallway seating shown here, and showed the need for expansion of the Engineering Campus to increase learning capacity. Photo by: Bryce Richter 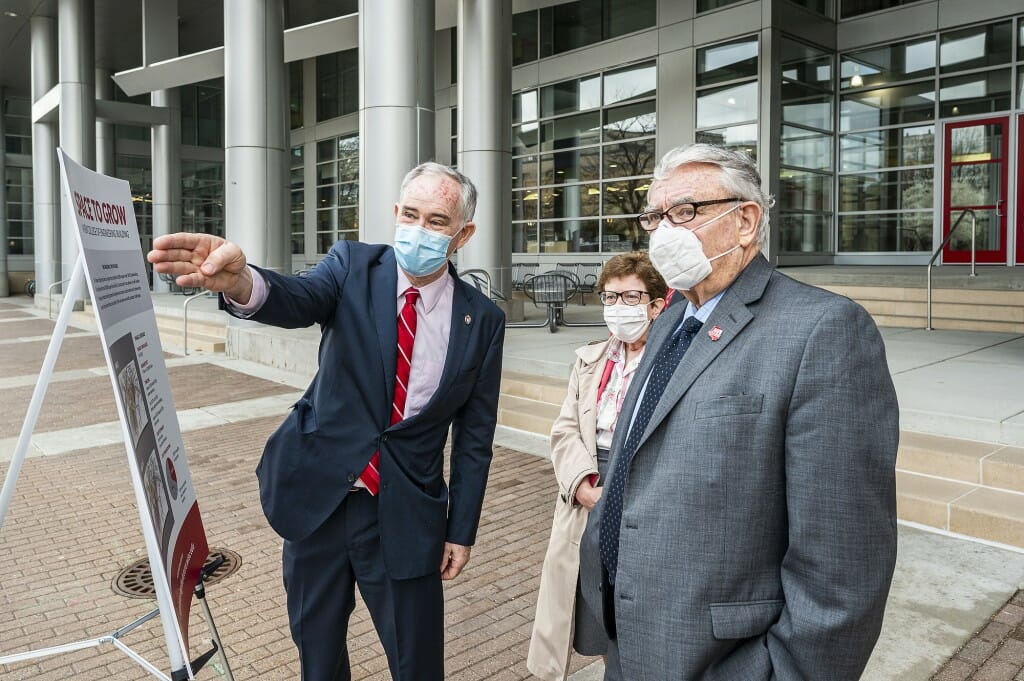 Robertson points out facets of the engineering campus toThompson and Blank during the tour. Photo by: Bryce Richter 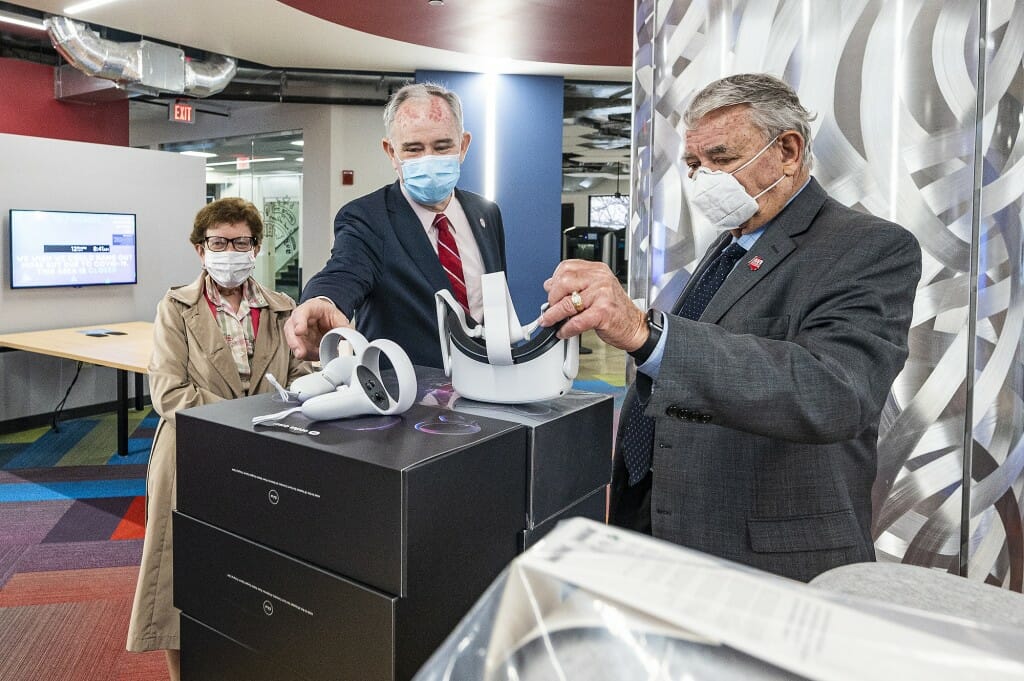 “Investing in higher education infrastructure is absolutely critical for delivering the kind of educational and research experience that UW–Madison strives to give,” Blank said at a press conference this morning outside the L&S Academic building. “The two projects that are in the budget for this year are cornerstones for growth and success at UW–Madison.”

Blank and Thompson were joined at the press conference by College of Letters & Science Dean Eric Wilcots and College of Engineering Dean Ian Robertson.

The L&S academic building, known as the Humanities Building or Mosse Hall, is badly in need of replacement, Blank said. As the largest college at the university, L&S provides the foundation for all of UW–Madison’s undergraduate students, with nearly 80 percent of all freshman and sophomore credit hours taking place within the college.

“This building is in dire shape,” Blank said. “It is not able to support student needs, it has inadequate heating and cooling, the classrooms are poorly configured. There are times that water has poured down the walls of the classroom … there’s a constant series of water leaks around the building.”

A new L&S academic building is planned for construction two blocks south of the current building. It will feature larger, modern classrooms needed to accommodate the university’s growing undergraduate enrollment. More than $23 million of the cost of the $88 million project will be paid for by gifts raised by the university.

Thompson said to fully repair the Humanities building, built in 1969, would cost approximately $70 million. “Now would anybody in their right mind put $70 million into this building?” he asked.

The College of Engineering building project would replace the current outdated facility with a modern building that will foster hands-on learning and research with expanded classrooms and state-of-the-art labs. The $150 million request for funding for the project includes $50 million in gifts and grants raised by the university.

“Our engineers are in huge demand,” Blank said, noting that employers are asking for more graduates. The new building would grow the capacity for undergraduate engineering students by 1,000, a 22 percent increase over current capacity.

“The engineering school is just an absolute marvel for our state. It’s growing our economy,” Thompson said. “These are the individuals that are going to build this state … and we don’t have the space (for them).”

The two projects were included in Governor Tony Evers Capital Budget proposal. The State Building Commission deadlocked on the governor’s proposal, and the plan was sent to the Joint Finance Committee without a recommendation. The Joint Finance Committee will take up the Capital Budget and Evers’ broader 2021-23 state spending package later this spring.