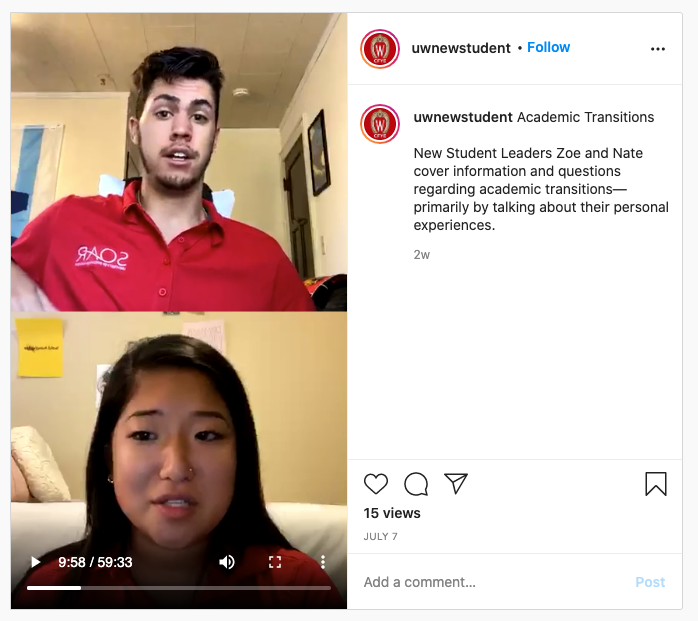 A SOAR Live “Talk About It Tuesday” Instagram session on July 7 was hosted by Nate Ferro and Zoe Klein. Incoming students ask questions and learn about campus at the sessions. Click on the photo to watch the archived Instagram session.

The questions came quickly, many of them the common ones asked by incoming first-year students in any year.

“How many credits should I take as a freshman?”

“Where’s the best place to study on campus?”

But every so often, a question spoke directly to the times.

“Is there even a point to coming to campus this fall with COVID-19?”

Due to the global pandemic, all SOAR activities are being offered virtually this summer. That includes the Q&A sessions that typically would occur in person when newly admitted students visit campus prior to the start of fall classes.

Those sessions now are happening almost daily and sometimes twice daily on platforms such as Instagram, Facebook Live and YouTube Live. Incoming students can log on from anywhere in the world and ask questions through chat-room functions. 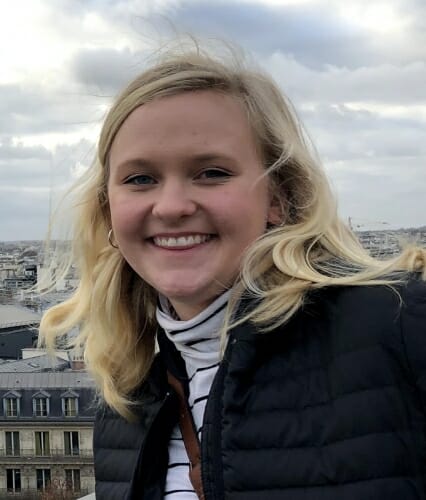 “Our goal is for students to be just as excited to come to UW–Madison now as before the pandemic,” says senior Emma Freiberg, a SOAR student programming intern who is in charge of most of the live events and social media outreach. “We’re all well aware that none of these students expected their first year of college to be like this. We’re trying to create the same school pride and build the same sense of community even though the SOAR experience is virtual this year.”

To increase interest and keep things light, the SOAR student workers brainstormed themes for the live events and gave them catchy titles that are purposely, “a little cheesy,” says Freiberg, who oversees a team of 19 UW–Madison students who host the virtual events.

On “Talk About It Tuesdays,” incoming students can broach some of the stickier topics, like the campus drinking culture or what happens if they get in trouble. “Wayfinding Wednesdays” helps newcomers acclimate to campus and Madison. There are also “Meet-Up Mondays,” “Traditions Thursdays” and “Family Fridays.” The latter includes professional staff members who join the student hosts to answer questions in their areas of expertise.

The sessions are proving popular. Most are averaging around 40 participants. The first “Family Friday” attracted almost 200 people.

“We’ve had surprisingly more people than we expected,” says Freiberg, a political science and geography major from Cashton, Wisconsin. “I think it shows that people are really interested and want to engage in the virtual experience.”

Susan Guderyon and her daughter Zoe, an incoming freshman, participated in a recent “Family Friday” session. They reside in Middleton, Wisconsin.

“I’ve been impressed that everyone we have had any interaction with has been really knowledgeable,” says Susan Guderyon, a UW–Madison alumna. “And if they didn’t know the answer, they were quick to provide Zoe with a link or to follow up with the information she needed.”

During the live chat, Susan was able to ask a question about safety in the residence halls, the issue she’s most concerned about. Zoe, who plans to live on campus this fall, says the answer helped ease her mind.

“For me, it’s not even so much what the UW is doing, because it sounds like they have a lot of plans in place for keeping people safe,” she says. “It’s more what other students will be doing. I’d like to think everyone will be really careful, but you just don’t know.”

Zoe says she appreciated hearing the perspective of current students, particularly about how to start accessing research opportunities as a freshman.

Nate Ferro, a UW–Madison senior and one of the SOAR student hosts, says he hopes to help ease first-year anxiety by sharing some of his experiences as a transfer student. While he wishes SOAR could be in person, he thinks there may be a few benefits to the virtual format.

“SOAR traditionally is a two-day event, and I’ve heard from others that they can feel pretty burned out by the end of it,” says Ferro, a communications major from Lisbon, Wisconsin. “With the virtual format, you can spread out the interactions and go at your own pace.”

Also, some incoming students may feel more comfortable asking questions anonymously through the online chat format than they would in person, he says.

The themed live sessions began July 7 and are scheduled to go through August 21. Some of the sessions are expected to soon start originating live from spaces on campus, such as Bascom Hill, with appropriate safety protocols in place for those hosting them.

The themed live sessions are just one way SOAR leaders are hoping to engage first-year students over the summer. New students also can schedule virtual one-on-one consultations with current campus student leaders or connect with other new students and student leaders who share common identities through virtual “affinity spaces.” Examples include forums for students of color, international students, first-generation students, and military veterans. Additionally, many schools, departments and units across campus are offering their own live virtual events this summer, including town hall meetings.

Junior Zoe Klein, another SOAR student host, says one of her goals is to reassure incoming students that the university is doing everything it can to return some normalcy to campus. She happened to be the SOAR chat leader who fielded the tough question about whether it makes sense to even be on campus this fall.

She answered by saying she completely understands where the student is coming from. She urged the student to consider living in a residence hall, as she said it’s among the best ways to meet others and to build community. But ultimately, she said, the decision should be made in consultation with the student’s parents and advisor.

Klein, a journalism major from Reston, Virginia, says she is enjoying the live chats because they allow her to share with new students the impact UW–Madison has had on her.

“I want them to love UW–Madison as much as I do,” she says.