On behalf of The Science Coalition, four universities — Northern Illinois University, Northwestern University, the University of Illinois and the University of Wisconsin–Madison — Monday presented a Champion of Science Award to U.S. Rep. Bill Foster, a Madison native, UW–Madison graduate and co-founder of Middleton-based Electronic Theatre Controls.

The award is given to members of Congress in recognition of their commitment to funding the basic research that keeps the United States at the forefront of scientific and medical discovery and technological innovation. 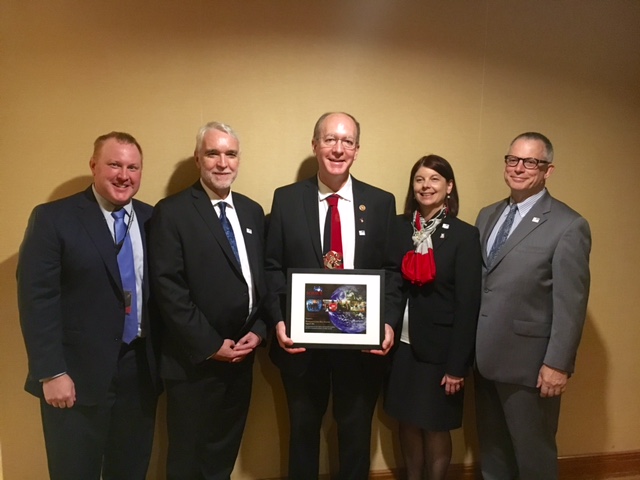 The award was presented to Foster, who represents Illinois’ 11th Congressional District, before an audience of several hundred physicists during the International Conference on High Energy Physics in Chicago. Representatives from Northern Illinois, Northwestern, the University of Illinois and UW–Madison presented the award to Foster, the only Ph.D. physicist in Congress.

“As a scientist and a legislator, Congressman Foster has a unique understanding of the role of science in our nation’s —and our state’s —economic competitiveness,” says Northwestern President Morton Schapiro.

“Congressman Bill Foster is an outstanding proponent of discovery-driven science at our universities and national laboratories,” Northern Illinois President Doug Baker says. “His record of support demonstrates his commitment to research and development, as well as his strong desire to see our country remain at the forefront of technological advancement and innovation.”

“Congressman Foster is well-deserving of this award for his efforts to both defend and promote federal investment in scientific research. Rep. Foster’s personal passion for advancing science and innovation — especially energy research and technology development, an area in which the University of Illinois has renowned strengths — is consistently reflected in his committee work, legislative activities, votes and public engagement,” says University of Illinois President Timothy Killeen.

“If America wants to lead the world in the discoveries, innovation and advancements to improve lives, it will be our commitment to science that drives us forward.”

“As the only Ph.D. scientist in the United States Congress, it is a great honor to receive the Champion of Science Award,” Foster says. “In Congress, I have fought to make sure we invest in the scientific research and training that is vital to our country’s economic growth, public health and national security. Scientific investment — whether through STEM education in schools or federal funding for scientific research — is a crucial priority for our country. If America wants to lead the world in the discoveries, innovation and advancements to improve lives, it will be our commitment to science that drives us forward.”

“Congressman Foster understood the benefits of science even as a teenager, when he and his brother brought digital controls to theater lighting and founded a business that still leads its field,” says Rebecca Blank, chancellor of UW–Madison. “His support for research as a member of the House of Representatives helps ensure future generations of Americans will benefit from inventions we can’t yet even imagine.”

The Science Coalition’s Champion of Science Award recognizes members of Congress whose actions and votes consistently reflect their belief that basic scientific research, conducted at universities and national labs across the country, is essential to the nation’s ability to address pressing issues in health, security, energy and the environment, and additionally, that a strong federally supported basic research enterprise drives innovation that fuels the U.S. economy. Rep. Foster joins a distinguished group of approximately 80 current and former members of Congress who have received this award since 1999.

The Science Coalition, a nonprofit, nonpartisan organization of the nation’s leading public and private research universities, is dedicated to sustaining strong federal funding of basic scientific research as a means to stimulate the economy, spur innovation and drive America’s global competitiveness.