The Ride gets research into gear 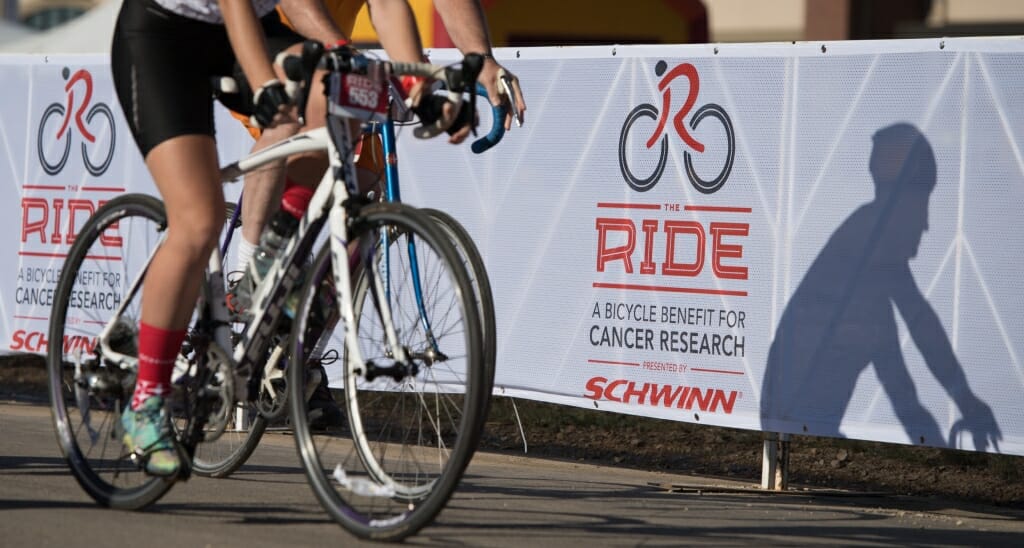 The Ride sends hundreds of bicyclists across eastern Dane County to raise money for cancer research on the UW–Madison campus. All images: Focal Flame Photography

The Ride is a signature cycling event that premiered in September 2016, sending hundreds of riders across eastern Dane County to raise money for cancer research on the UW–Madison campus.

The mission of The Ride is to advance state-of-the-art cancer research and treatment for families in Wisconsin and beyond. In its first two years, The Ride raised over a half million dollars and every dollar stayed here, funding 20 faculty and students to support promising cancer research at the UW.

While raising $500,000 in its first two years is laudable, Deric Wheeler and Paul Harari, who direct The Ride, believe the event has only just begun to leverage the enormous power of the UW campus and community. 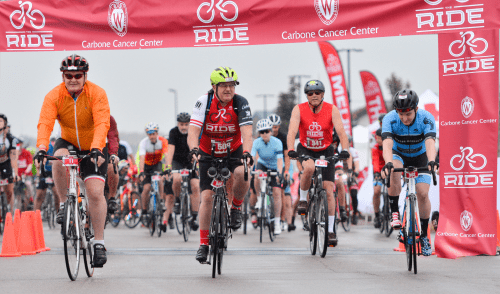 “One of our aspirations is to engage every college, school and department to form a team and create a friendly rivalry in the spirit of curing cancer,’’ Wheeler says. “Nearly all families are touched by cancer, and The Ride raises money that stays right here at UW to drive forward cures for cancer.”

There is still time. This year The Ride takes place on Sept. 23. Register, donate or volunteer to support UW cancer research.

And if rivalry revs you up, a certain other Big Ten campus with a longer-running bicycle event has raised over $157 million to support cancer research on its campus. (Hint: Its mascot is a nut.)

UW Medical School leaders such as Richard Moss, senior associate dean for basic research, biotechnology and graduate studies in the School of Medicine and Public Health, say local fundraising can make a huge difference in boosting a campus’s research portfolio. Federal grants are the largest source of funding for cancer research, but the proportion of grant applications that get funded is decreasing. Pilot studies with strong preliminary data that demonstrate feasibility have the best shot. 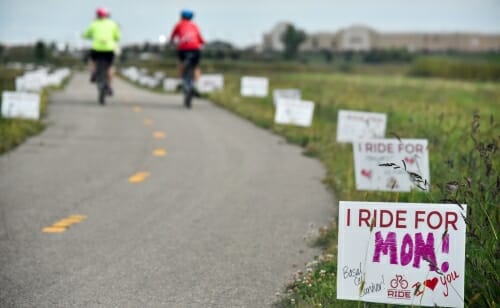 Participants made hand-lettered signs showing who they dedicated their fundraising efforts to.

“As we’re looking to carve out innovative and creative research directions and compete for National Institutes of Health grants, we need to fund feasibility or proof-of-concept research,” Moss says. “And the primary source of these funds is philanthropy.” This is where The Ride comes in. The Ride awards research dollars to the most promising cancer research within months of it being raised. This “bike to bench” philosophy is already making an impact on cancer research.

A great example of this is Zachary Morris, an assistant professor of human oncology. Morris received a $25,000 Ride Scholarship from the inaugural 2016 Ride to help fund preclinical research to study the use of immunotherapy agents in combination with radiation. The early results were so encouraging that the National Institutes of Health awarded Morris a prestigious $1.25 million Director’s Early Independence Award last year.

“It all begins with seed money that can be used for testing new ideas,” Morris says. “The Ride and other community-based fundraising efforts are absolutely essential to cancer research progress because they provide such seed money. In essence, they’re one of the most crucial instruments for driving truly innovative cancer research.” 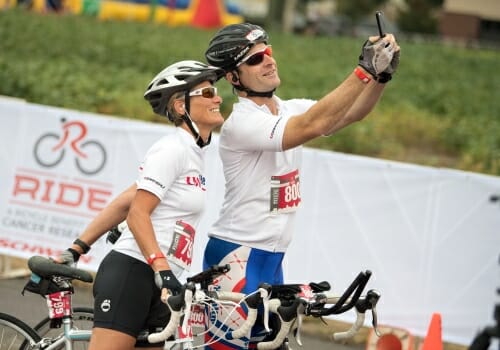 Vicki and Steve Hill make a photographic record of their efforts.

Morris’ Ride-funded research is just one of several projects currently underway on campus.

His colleague Jennifer Smilowitz, a clinical associate professor in the Department of Human Oncology, is using her award from The Ride to create better ways of managing the motion caused by breathing during radiation therapy.

With help from an engineer, Smilowitz used the Medical Physics Machine Shop to create a moveable stage to connect to a high-precision motor that can mimic a breathing motion. The stage, which moves on rails made of carbon fiber (the same material used for high-end bicycle frames), provides a platform for devices for measuring radiation doses.

“The money from The Ride is enabling us to make a nice arsenal of tools we can use for testing motion management, which is going to be a big factor at the University of Wisconsin in years to come,” Smilowitz says. “If we can show that these motion management techniques work, they will be adopted for clinical use and improve treatment by enabling us to reduce the amount of healthy tissue that gets irradiated during treatment.” 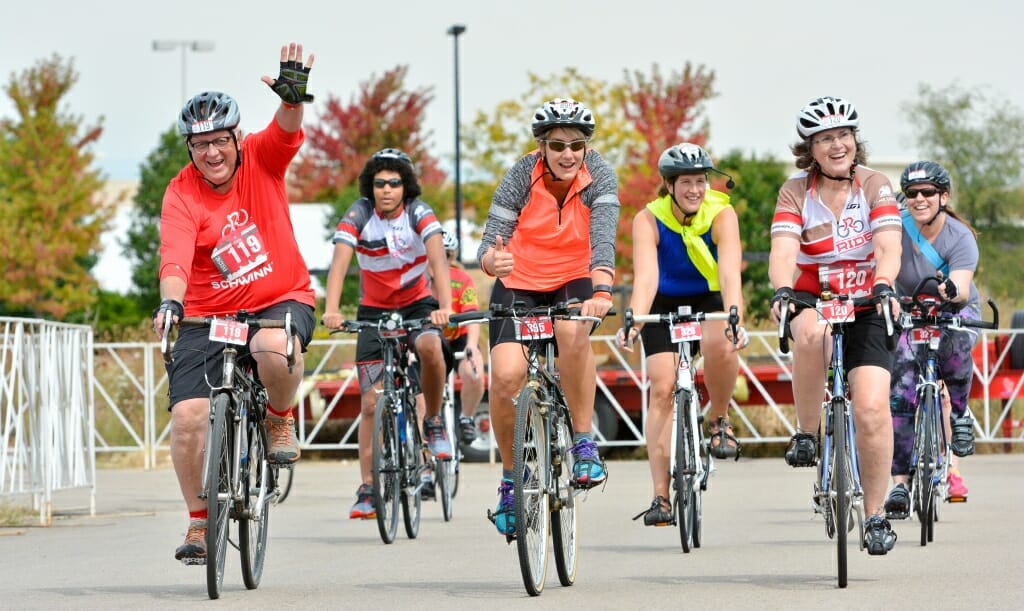 The Rathert group celebrates its finish.

Meanwhile, across campus at the Wisconsin Institute for Discovery, Peter Lewis is using his Ride Scholarship to further his research into the epigenetics of cancer. His work focuses on how genes are turned on and off during development, and how mis-regulation of those genes can lead to some childhood cancers.

More research funded by the The Ride can be found here.

“I’m confident that in five years we’ll see next-generation clinical trials that will have their origins in the seed money provided now by donations to The Ride,” Morris says.

The Morris family, which includes Zach’s brother Brett, a student in the UW’s medical scientist training program, rode last year in honor of their father, former Stevens Point Police Chief Jeff Morris, who is being treated here for brain cancer.

“You just never know when you’re going to benefit from UW research,’’ says Zach Morris. “We’re all in this together.”