“The Quiet Rooms” by Jodi S. Cohen of ProPublica and Jennifer Smith Richards of the Chicago Tribune has won the 2020 Anthony Shadid Award for Journalism Ethics from the Center for Journalism Ethics at the University of Wisconsin–Madison. Through careful work with vulnerable and traumatized children, Cohen and Richards documented the unlawful use of seclusion and restraint in Illinois public schools, prompting state officials to impose an emergency ban on seclusion within a day of publication. 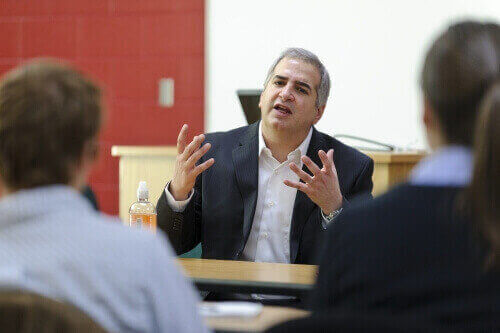 Anthony Shadid (center) speaks to a group of journalism students in a Vilas Hall classroom in December 2010. Photo: Bryce Richter

Named for UW–Madison alumnus and Pulitzer Prize-winning reporter Anthony Shadid, the award honors the difficult ethical decisions journalists make when telling high-impact stories. Shadid, who died in 2012 while reporting on Syria, was a member of the Center for Journalism Ethics advisory board and worked to encourage integrity in reporting.

Lucas Graves, associate professor in the UW–Madison School of Journalism and Mass Communication and chair of the Shadid Award judging committee, said this year’s winner showed how conscientious reporting can make a real difference.

“Cohen and Smith had to navigate a string of difficult decisions in exposing the pattern of abuse taking place across Illinois public schools, beginning with how to find out what children went through without traumatizing them all over again,” Graves said. “This series sparked widespread reforms while also earning praise from both school supervisors and the families of children involved — a testament to how careful, thorough and honest the reporters were as they worked on the story.”

Director of the Center for Journalism Ethics Kathleen Bartzen Culver praised the other three finalists for the award:

“This year’s finalists all show us the critical role journalists play in protecting vulnerable people,” Culver said. “They made difficult choices throughout their reporting and have marked a path for others to follow in telling these kinds of stories. We’re proud to celebrate their courage and integrity.”

The Center for Journalism Ethics, housed in the School of Journalism and Mass Communication at UW–Madison, provides an international hub to examine the role of professional and personal ethics in the pursuit of fair, accurate and principled journalism. Founded in 2008, the Center offers resources for journalists, educators, students and the public, including internationally recognized annual conferences exploring key issues in journalism.