Badgers have the top t-shirt cannon in college athletics. Boom. 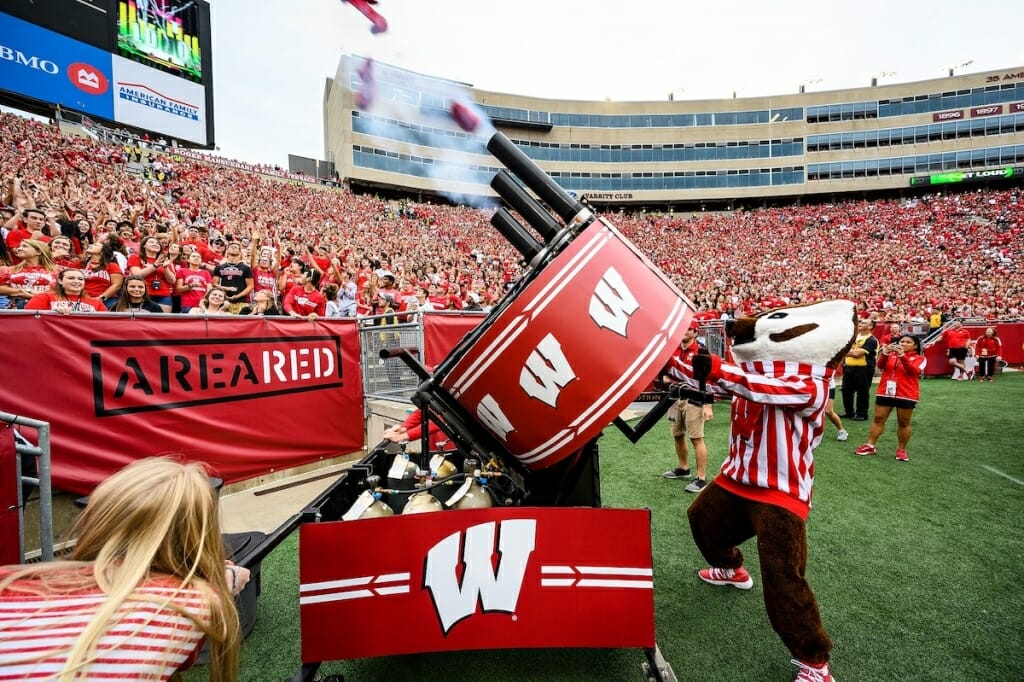 Bucky Badger fires t-shirts into the student section at Camp Randall Stadium with the new t-shirt cannon during the game against Central Michigan on Sept. 7. Photo: Jeff Miller

If you missed last weekend’s football game against the University of Michigan, there was a whole lot to be impressed by — the Badgers won 35-14. Jonathon Taylor rushed for 203 yards. The entire stadium of fans managed to coordinate into a pattern of red and white stripes.

Oh, and there was a huge revolving t-shirt cannon. (Like really huge.)  The Athletics Department unveiled it at the first home game, but this was a chance to show it off in a national stage.

Fans in the student section went wild as Bucky and a few of his friends shot hundreds of t-shirts into the air. From afar, it looked like a giant sweeping mass of snowballs soaring into the sky. Fans were jumping up and down at the same rate and with the same excitement as they do for third quarter’s “Jump Around.” And if they’re lucky, they managed to go home with some new Badger apparel. (If you weren’t able to get your hands on one of the shirts, the cannon will shoot off a different t-shirt design at every game.)

With so much happening on game days at Camp Randall Stadium, it’s no surprise that Madison is ranked as No. 1 in Sports Illustrated’s list of best college football towns.

But the city isn’t the only thing that’s No. 1 — the cannon is too. Seriously.

According to Kevin Kluender, the assistant athletic director for marketing and promotions, UW–Madison has the most powerful t-shirt cannon in college athletics. In just 10 seconds, the specially-made cannon is capable of shooting 114 shirts, or 11 shirts per second. In other words, that’s a lot of shirts.

For Badger fans, that means those who sit high up in the stadium no longer have to worry about not getting a chance at freebies during a t-shirt toss. From the field, the cannon has fired t-shirts as far as row 45 at Camp Randall — that’s only about 25 rows down from the very last row in the student section.

T-shirts also are manually thrown by people walking in the stands to hit the very top rows of the student section.

While the t-shirt cannon accolades are nice, Kluender says it isn’t about setting records — it’s all about creating a memorable fan experience for everyone.

Judging from the reaction of the student section, the t-shirt cannon definitely did leave its mark — both in the sky and in the hearts of Badger fans.