Syrian refugee shares story of persecution for Out and About Month

Growing up as a gay male in Syria, Subhi Nahas’ sexuality contributed to a childhood lived largely in isolation, marked by harassment and bullying. While at university, his classmates were afraid to associate with him, fearing what he called “guilt by association.”

“In Syria, as a gay man, you just never feel safe,” says Nahas. “You don’t feel safe in the streets, at home, anywhere.”

Nahas spoke about his experiences at the University of Wisconsin–Madison on Tuesday, April 5 as part of the LGBT Campus Center’s Out and About Month. The full schedule of events and speakers seeks to celebrate LGBT pride and highlight achievements. 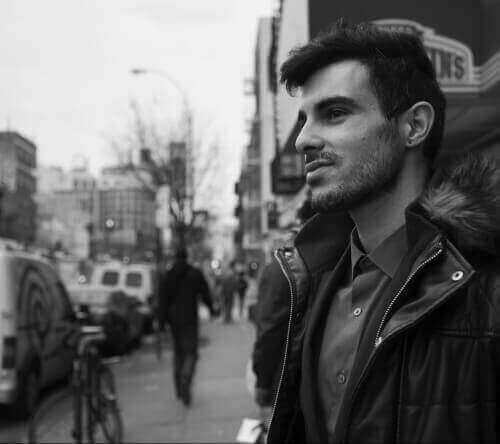 Subhi Nahas, a Syrian refugee who recently testified in front of the UN Security Council about the plight of gay and lesbian individuals persecuted by the Islamic State, spoke at UW–Madison as part of Out and About Month. Jo-Lynn Otto

“Out and About Month is all about elevating the diverse, dynamic, and resilient stories across the LGBTQ+ community,” says Gabe Javier, assistant dean of students and director of the LGBT Campus Center. “Subhi Nahas’ story reflects universal themes around self-acceptance and love. Just as importantly, his brave account is a reminder of the work that we have to do to ensure safety for LGBTQ+ people across the world.”

Despite what Nahas has seen and experienced, his message to students is optimistic.

“I always say there are a lot of people who are willing to support and help,” says Nahas. “I can only hope that, just maybe, we can give you hope that there is a safe future.”

In August, Nahas made history when he testified in front of the United Nations Security Council about the persecution of gays and lesbians throughout the Middle East by the terrorist group known as the Islamic State. It was the council’s first session devoted to LGBTQ rights, and he jumped at the chance to tell a story that he had lived in painful detail.

“I always wanted to deliver the message that we are here,” says Nahas. “We exist. We are not a marginalized community anymore; we want to be heard.”

Violent homophobia in Syria is not a new phenomenon, but in recent months it has been thrust into the Western media spotlight with the rise of Islamist groups. Nahas himself was captured after officials suspected him of being gay; he can recount multiple cases of people being tortured because of their sexuality.

Often, he says, the police and others would deceptively foster a “safe space,” only to conduct raids and imprison anyone linked to homosexual behavior.

Nahas spoke at the UN on behalf of the Organization for Refuge, Asylum and Migration (ORAM), where he now works. The group helps migrants search for asylum and provides legal representation for those who need it.

Nahas has always worked in LGBT activism, even if it took the form of an underground network. Now he’s using his passion for activism to help shed light on the refugee crisis and the ways it connects with other human rights issues.

After months of waiting, Nahas has been granted entry into the United States. He now lives in San Francisco, where his cultural surroundings seem almost too good to be true.

“For the first time, I feel that I don’t have to change myself,” says Nahas, with an expression of sincere happiness. “I can be what I want to be and who I want to be without fearing that I will be isolated.”

Gabe Javier and others who helped plan Out and About Month are excited to be able to share Nahas’ triumphant story with the UW–Madison community.

“The more that we can help sponsor programming that shows the amazing array of shades of experience in our community,” says Javier, “the better we all are.”