A genetic scan of a massive number of samples taken from tuberculosis patients across China has shown a surprising genetic uniformity: just two “strains” of the tuberculosis bacterium account for 99.4 percent of all cases. 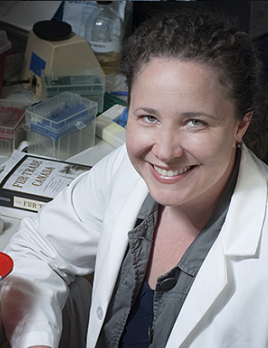 “Yes, I was surprised at the lack of diversity in the bacterium,” said Caitlin Pepperell, an associate professor of medical microbiology at University of Wisconsin–Madison. Pepperell is a corresponding author in a paper published online today (Nov. 5) in Nature Ecology and Evolution that looked at 4,578 samples from patients in China.

China has about one million new cases of TB annually, a number that is slowly falling. Each year, 10 million cases of TB account for an estimated 1.7 million deaths globally, making it the most deadly infectious disease. The pandemic is particularly acute in developing countries in Asia and sub-Saharan Africa.

The most likely explanation for the uniformity of TB strains in China is political. Movement into the old empire was limited by dynastic policies of seclusion, Pepperell says. “The hypothesis my colleagues and I use to explain the surprising lack of diversity is that at the time when the current TB epidemic was taking hold in China, there was less contact with other regions compared to contemporaneous societies elsewhere, but there was a lot of movement within China.”

That internal movement allowed the strain Lineage 2 or L2 to spread widely in China, where it now accounts for 80 percent of current cases. L2 is estimated to have arisen in Southeast Asia, with subsequent evolution of important daughter strains within China.

The introduction of strain Lineage 4, which now causes 17 percent of cases in China, was likely from ships engaged in the silk trade between 1084 and 1336 A.D. 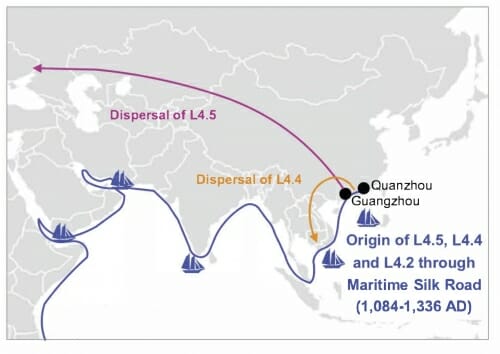 And because apparently few other strains were introduced into China, the result is a picture not seen elsewhere – of two dominant strains in a pandemic that has persisted for a thousand years or more.

Several features distinguish TB from other pathogens and make its evolution dependent on human behavior. Mycobacterium tuberculosis does not share DNA with other species of bacteria. This dangerous phenomenon, called “horizontal gene transfer,” allows rapid movement of traits like antibiotic resistance among bacteria.

And because TB has no non-human hosts, it infects only through human-to-human contact, producing a slower advance compared to many other epidemics.

Although these factors could help explain why a political decision to isolate China allowed two strains to move through the country largely unchanged, the study was not designed to prove causation.

The new study adds to an emerging picture of the movement of the dangerous and persistent TB epidemic across the globe. In a recent report in Science Advances, Pepperell and colleagues studied Lineage 4, the predominant international strain, and concluded that “repeated sourcing from Europe has been the main driving force for the global expansion of L4, with intense dispersal to Africa and the Americas concomitant with European colonizing efforts” between the years 1600 and 1900.

That study also found that strains of TB resistant to multiple drugs in recent decades have “overwhelmingly” remained local. That encouraging finding raises the possibility of limiting the spread of these particularly dangerous pathogens.

After decades of little progress in drug treatment for TB, new drugs are already in use or in the pipeline, Pepperell adds. However, because many people stop taking the pills before the bacterium is fully vanquished, standard practice calls for practitioners to watch that doses are actually taken for at least the six months needed to clear the infection.

Pepperell, who practices infectious disease medicine in addition to her research, says a main goal of the genetic studies is to gain an evolutionary understanding of why TB is so difficult to treat and eradicate. “We talk about robustness and adaptability,” she says. “A robust organism is strong in the face of perturbations. Adaptability is the ability to change in response to a change in environmental conditions.”

Clearly, the Lineage 2 strain that dominates in China is robust. It is also a major cause of drug resistant TB, demonstrating its adaptability as well.

The current study alone, she adds, “will not tell us why treatment and eradication of TB is so difficult, and it will not change treatment, directly. The overarching contribution of this kind of study is to understand what forces shaped these bacteria. That is obviously relevant to treatment, and to drug resistance, but you can’t draw a direct line from what we have found so far, saying, ‘These will be the effects.’”

This work was supported by the National Institutes of Health (grant 1R01AI113287-01A1); the Natural Science Foundation of China and other sources.