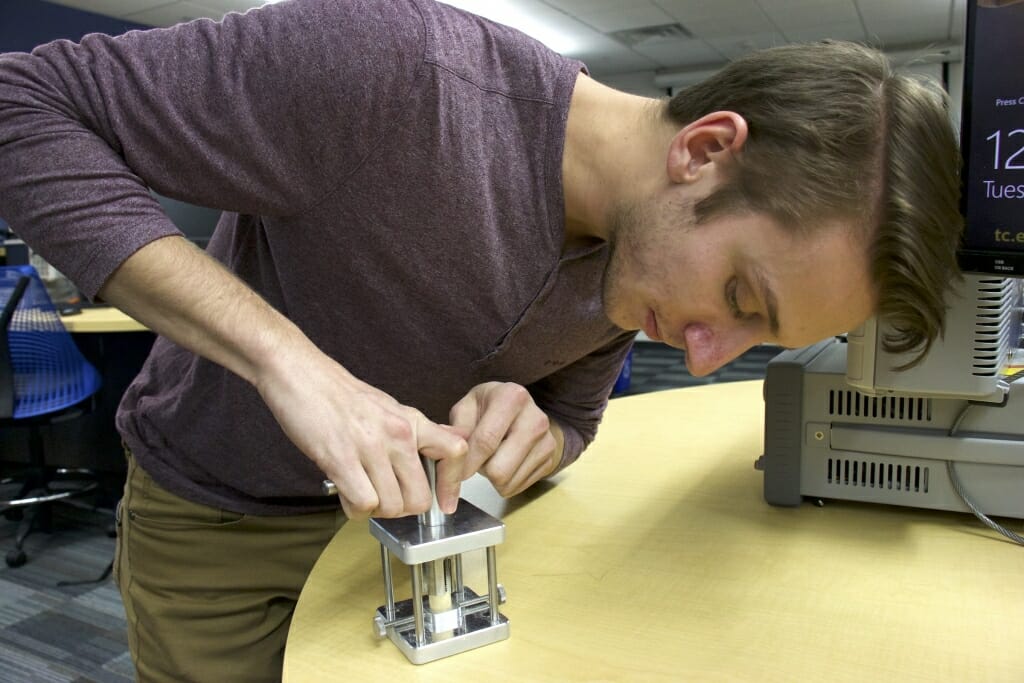 Alex Teague demonstrates a device for aligning thread-cutting tools for bone transplants. His group has shown that handling the graft more delicately, by screwing rather than hammering it into place, would preserve more cartilage. Photos: David Tenenbaum

The problem-solving abilities of 64 teams of undergraduate biomedical engineering students will be on display at UW–Madison on Friday, Dec. 7, from noon to 2:15 p.m. in the atrium of the Engineering Centers Building, 1550 Engineering Dr.

The projects in the BME Design Course Presentation run the gamut from assistive devices to analytical tools, from surgical aids to a radiation shield.

Many of the projects are requested by “clients” in industry, business and medical establishments. A good number of them concern conditions that are too rare to interest established manufacturers. One example is edema caused by leaks in an infant’s cardiovascular system. That project’s client, a cardiovascular surgeon at UW Hospital and Clinics, is interested in a system to compress the limbs to force fluid back into the blood system after surgery. 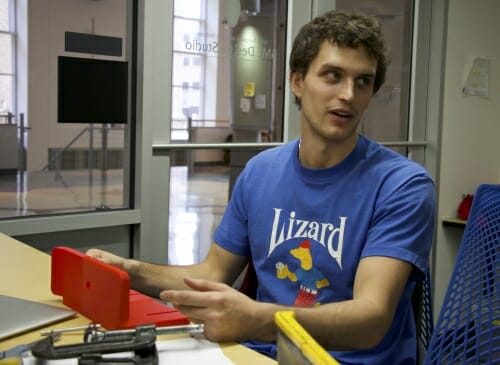 Eli Stanek shows a preliminary design for a system designed to compress a limb after cardiovascular surgery.

The learning begins even before the project is chosen, says Ryan Wisth, a senior who leads the fluid-control project. “It’s massive. We tried to pick a project that would need significant creativity. If you pick something too easy, you get a quick solution, and don’t have to put in much work. A hard project may have you going in circles, from prototype to a solution and back to the drawing board, but you’ll have to keep thinking, and you will learn a ton.”

Almost none of the projects will be finished in a single year, and some may never function. But all the projects work as educational tools, says Tracy Jane Puccinelli, one of the instructors. “When things don’t go as expected, we give them the tools to solve the problem a different way. The design process has distinct phases: brainstorming, evaluating the preliminary designs, … presenting one to the client. It’s a sort of cookbook that still allows creativity.” 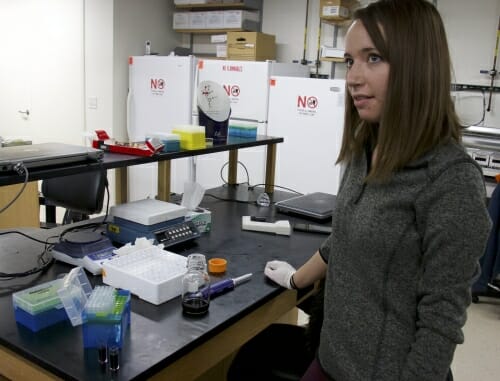 Tyler Bambrough, who is part of a group designing a device to analyze the chemistry of urine to determine the likelihood of a repeat kidney stone, says, “We are working with a UW nephrologist, have meetings to discuss the device, and send weekly progress reports. You don’t get that project-management side in the classroom.”

Because the seven semesters of engineering design begin in freshman year, skills increase along with challenges, Puccinelli says. “Once they have the method down, they have a good base of skills as juniors and seniors, and they don’t get frazzled.”

“The students are so passionate about their design because they are working on real-world challenges for real people,” says John Puccinelli, associate chair of the undergraduate program in biomedical engineering and husband of Tracy Jane Puccinelli. “As a result, they dedicate so much of their time toward this course and it becomes an incredible learning opportunity for them and advances them toward their desired careers.”

The courses are labeled “design,” but the overall goal is larger, says instructor Paul Thompson. “We teach some of bigger-picture aspects, not only about engineering, but also about working in technical fields that are beyond what they get from formal coursework. Students learn to work in groups, which is more and more how companies like to operate.” 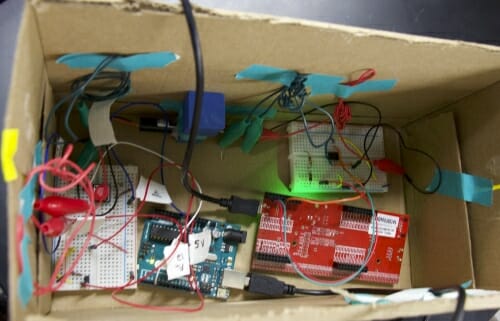 A prototype doesn’t have to look good — it just has to work. The green light in this box helps in the chemical analysis of urine for the kidney stone project.

Thompson, who retired from a career in the dairy industry, adds, “We teach about how to present yourself and your ideas, in written and oral formats, in posters. At the end of the senior year, they get practice in short pitches to entrepreneurs, who just want an initial screening to see if it’s an idea they might want to learn more about. These courses are about way more than just design.”

As Tracy Jane Puccinelli indicates, success is a great teacher, but so is failure. “We warn them as freshmen. It will fail the first time you test your device. Failure is good in the lab, not on the launch pad.”