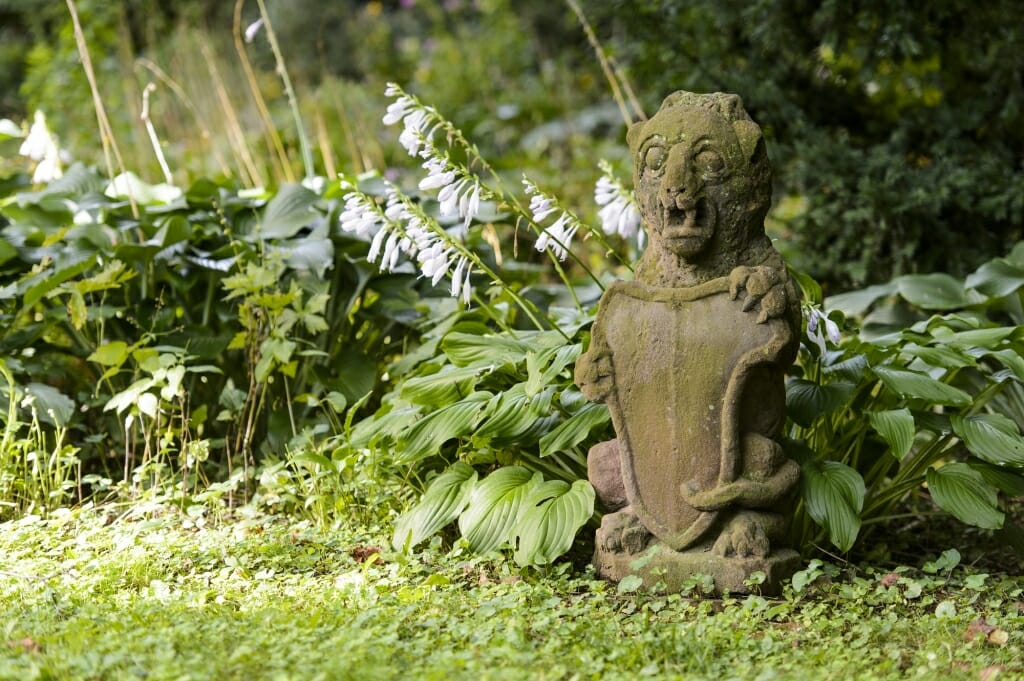 A sandstone gargoyle — one of two that originally graced the old UW Law School Building — is pictured in the garden of a westside Madison home, where it ended up after being toppled during a storm in the 1950s and retrieved by two law students. Photo: Bryce Richter

Some families have a dog or cat. Maybe a goldfish or two.

The Been family has a gargoyle.

It’s been there through good times and bad. Weddings and funerals.

It’s lived in Wisconsin most of its life — Brookfield, Maple Bluff and Madison, with a few years spent in Virginia.

But after nearly 70 years, it’s going back to its original home at the University of Wisconsin Law School.

It’s been quite a journey — not just for the gargoyle but for the entire family of Paul and Anita Been.

“It’s part of our family history,” says Jennifer Bakke, one of the four Been children. “It’s been a presence.” 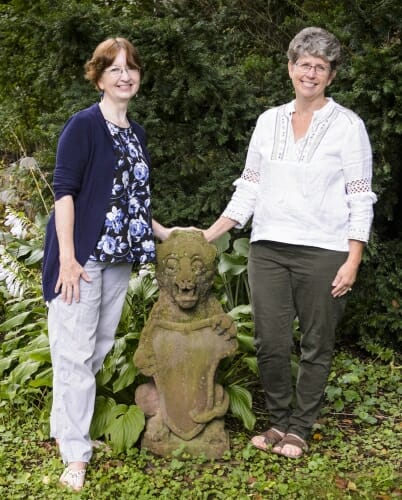 Sisters JoAnna Rice (left) and Jennifer Bakke flank the gargoyle, which remained in the family garden for decades but is now being returned to the UW Law School. Photo: Bryce Richter

On a recent sunny morning, Jennifer and her sister JoAnna Rice have gathered in the garden of their mother’s west side Madison home. The Been children have decided: It’s time for the “right gargoyle” to join the left gargoyle at the Law School.

And it isn’t made any easier when they realize that it was four months ago on this very day that their mother died. They’re helping settle her estate and get her home ready for sale. That means taking care of the gargoyle.

“It’s been part of the journey of our family,” Rice said. “We all have stories.”

According to the Law School, in 1963, when the existing Law School was demolished to make way for a new building, Law School Dean George Young found and rescued a sandstone gargoyle from the rubble. This figure and its departed twin had sat on the roof of the 1893 building for almost 70 years. While one of the pair perished in its fall, the second landed unscathed.

The Been family grew up hearing a very different story from their dad. Oh, the joy when someone hadn’t heard it before. That just meant they could tell the story again, which is why David Been, one of the four Been children, emailed the Law School to let them know they were about to get a very special gift, albeit one that could be considered regifted.

According to Been family legend, it was a dark and stormy night — it had to have been — when a storm hit the Law School. Two gargoyles had been perched atop the building since 1893. After the storm, which happened around 1951 or 1952, the “right gargoyle” was knocked off its perch.

Undated photo of the entrance to the old Law School building, with one of the gargoyles visible at upper left. Ann Waidelich collection/ UW–Madison Archives

One morning, Paul Been (the Been children’s father) and a fellow law student happened upon the gargoyle, which had landed presumably in the dirt or on bushes or some surface that did not injure it in any way. They obtained a wheelbarrow and hauled it away, where it took a ride in a Stutz Bearcat sports car.  The pair brought it to the other student’s family farm, where it stayed for a decade or so until it moved to the Village of Maple Bluff in the Madison area. In 1970, the gargoyle moved to the Been backyard in Brookfield, Wisconsin, when Dave was approximately 2 years old. Paul Been passed away Nov. 20, 1983. After his death, the gargoyle remained in the yard and then followed their mother from Milwaukee to Alexandria, Virginia, and then back to the Madison area around 1987.

“I was stunned,” Law School Dean Margaret Raymond says of when she found out it survived. “The story here has always been that the gargoyle that has graced our building here for decades was the only one saved from destruction. But I guess it’s no surprise that someone coming out of the UW Law School is resilient, adventurous and adaptable (if a bit hard-headed). Our graduates have been that way for 150 years.”

Yes, all good stories can be a bit fuzzy in their facts. The right gargoyle knows but isn’t talking.

However it ended up in the Been family backyard, it’s a good story that, much like the gargoyles, will stand the test of time. 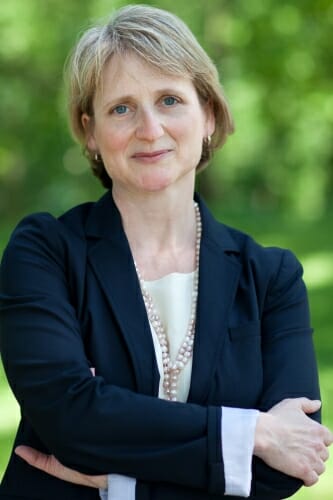 Law School Dean Margaret Raymond says she was “stunned” when she found out the gargoyle had survived. UW Law School

“No one could have known how much this gargoyle would come to mean to us over the years,” Raymond says. “And like any family, we’re delighted to reunite with our long-lost relative.”

Fortunately, the statute of limitations for absconding with a gargoyle has long run out, but Raymond doesn’t think it would matter anyway.

“If I were counsel for the ‘rescuers,’ I would probably argue that the property had been abandoned and was therefore free for the taking at the time,” Raymond says.

The Been family ties to the UW run deep. Paul and Anita met at summer school in 1952.

“Bring a swimsuit,” Paul told Anita for their first date on Lake Mendota.

He brought a ukulele. That’s all it took.

“Would you like to raise a family of Badgers?” he later asked.

They were engaged soon after. Three of the four children graduated from the UW.

When they were kids, Dad had a copy of The Gargoyle, the Law School’s alumni magazine, next to him.

“You see that gargoyle on the cover?” he asked. “Well, he’s the one in the garden.”

It would be a real family event when they’d walk by Bascom and see the other gargoyle.

(Actually, it’s not a twin, David points out. It’s a mirror image.)

And that’s how they grew up with a gargoyle. Bakke visited Notre Dame in Paris once and was surrounded by gargoyles.

“It was like I was among friends,” Bakke said. “Gargoyles are good karma.” 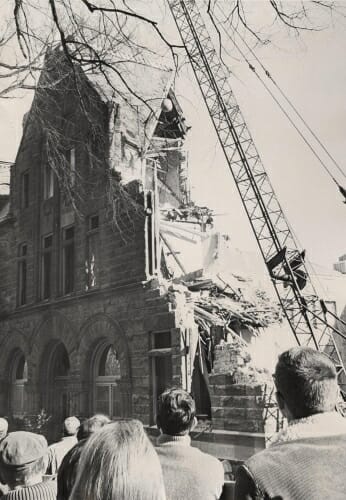 There are some blanks in this story that could use filling in. Who carved the gargoyles? Why did people believe so easily that one was destroyed, especially when no remnants of the supposedly destroyed gargoyle were left behind? Where did the two law students get the wheelbarrow? Did someone perhaps help share the legend of its destruction in an attempt to dissuade questions and allow the gargoyle to fly free?

And what of the “left” gargoyle. Could it be jealous? The sisters don’t think so. After all, it’s gotten to live on campus and spend time with generations of law students.

“We are so grateful to the Been family for bringing this gargoyle home,” Raymond says. “I hope they know that they’re always welcome here, to visit the gargoyle that was a part of their family and to let us embrace them as part of the bigger UW Law family. Their memories of their dad’s love for the Law School and for this symbol that was part of us are an important part of our story as well.”

Paul Been died when he was only 57.

“It became a link to him,” Rice said. “He was always around through the gargoyle.”

It’s been a symbol of their dad’s adventurous spirit — a reminder that he wasn’t always a father and husband. He was a guy who could find a wheelbarrow when he needed it.

Anita Been succumbed to dementia in her last years of life. The Been children created a bedroom for her in the family room with her bed next to a massive picture window overlooking the backyard, where she could see the garden and watch as songbirds and turkeys visited the gargoyle.

“I just woke up this morning, thanking it for being a family protector,” Bakke said.

Maybe that sounds silly, but not if you grew up with a family gargoyle.

“No one could have known how much this gargoyle would come to mean to us over the years,” Raymond says. “And like any family, we’re delighted to reunite with our long-lost relative.”

It’s been a good run for the gargoyle, who has been surrounded by hostas, lilies and plenty of love. As hard as it was, the children all agreed: It was time for the gargoyle to go home.

“It has been a difficult decision but the time has come for the gargoyles to be reunited,” David Been said. “We hope that they can be displayed and appreciated, but I doubt the ‘right gargoyle’ will ever be loved as much as it was in my parents’ garden!”

The Law School is celebrating its 150th anniversary this year. It’s deciding the best way to welcome the gargoyle home.

“Before, the single gargoyle was a symbol of what’s past — the last remnant of an old building, a distinctive (if ugly) figure, and an acknowledgement of the Law School’s history,” Raymond says. “By contrast, the pair of gargoyles are future-looking; together, they’re a symbol of change, rejuvenation, embracing what’s new and expecting the unexpected. We couldn’t have imagined a better way to celebrate our sesquicentennial and look forward to the next 150 years.”

Will the right gargoyle miss the Been family, the sunshine and the birds that have come to visit it for decades?

“It’s an old soul. It will survive,” Bakke said. “If the gargoyle could talk, it would say, ‘Job well done.’”