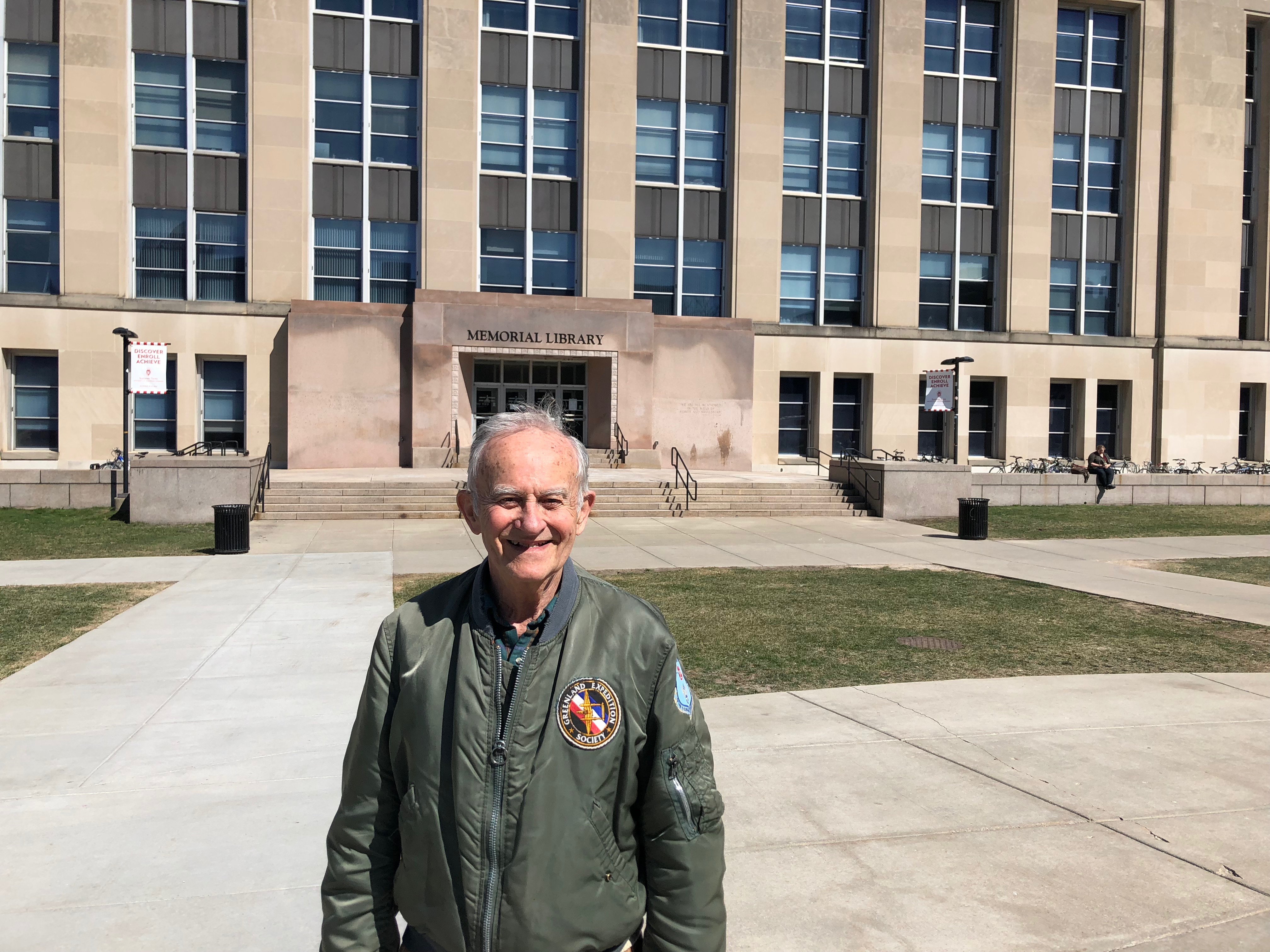 Ray McCool, an auditor for 17 years, stands outside of Memorial Library after attending a lecture. CREDIT: PARKER SCHORR

If you were to line up entire student population by age and have them walk through the doors of a colosseum-sized lecture hall, the first 6,000 plus, nervously but eagerly shuffling in, would be 18 and 19-year-olds fresh out of high school. The freshman would be followed by the 20-year-old sophomores, a class that is a hundred souls fewer but many times more grizzled than the new kids on campus. And the juniors and the seniors would file in afterwards – most nearing the end of their collegiate careers and with the bags under their eyes to prove it.

After the graduate students, mostly in their mid-to-late twenties, find their seats, the age distribution becomes a lot less concentrated: an occasional 30-year-old returning to school after serving in the military, a few 40-year-olds working towards a degree they didn’t have the chance to attain when they were younger.

At the very end of the line, meekly taking up the last seats near the back of the classroom, is a group of students who are old enough to be the grandparents of the freshmen and the parents of many of the professors but who nevertheless are often more exhilarated to learn than anyone on campus.

These students are called senior auditors and can attend a wide-range of lectures at University of Wisconsin System schools for free due to a Wisconsin State Legislature mandate, as long as they’re Wisconsin residents and at least 60 years old. 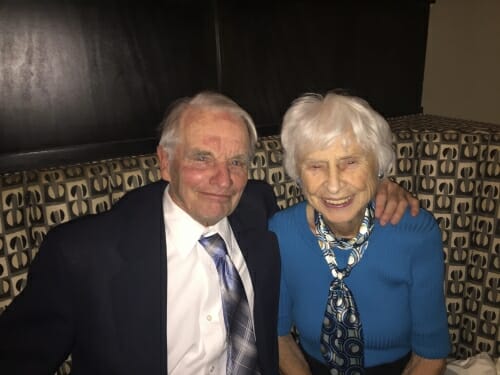 James and Eunice Hecker have been auditing lectures at UW for decades. CREDIT: Jay Hecker

Jim and Eunice Hecker, both 90 years old, have taken classes every semester at UW for decades. But the husband and wife duo rarely take classes together because their interests don’t overlap: Jim likes learning about geography, nature, and history, while Eunice prefers anthropology, science, and ethics.

Like a typical student, Eunice hops off the city bus carrying a backpack with notebooks and pencils.  Jim parks at Eagle Heights and takes the 80 bus, arriving to class without any materials.

“I want [students] to see that learning goes on forever,” Eunice said.

“I go in, and I listen, and I enjoy, and then forget as soon as I leave the room,” Jim joked, contrasting his learning style with his wife’s. “I couldn’t pass the tests of the courses I’ve taken.”

Senior auditors don’t take tests or do homework or participate in discussions like paying students do. They can’t attain a degree and there are some restrictions on the types of classes they can take – no high-participation courses like language or recreation – but the vast majority of the course catalog is fair game.

Jen Roth, 67 years old, said the release of the upcoming course list is a big, anticipated event in her life now.

“It’s such a thrill the first time you look at the course catalog for the coming semester,” she said. “I’m like a kid in a candy store.”

She once took a full course load one semester – 5 classes, 18 credits – but that was before she had four grandchildren to take care of. Now, she takes a more manageable schedule. This semester she audited three classes: a course on existentialism, a bioethics class dealing with ethics issues in health care, and an art in history class focused on propaganda in 20th century west Europe.

“Each and every one I get so much out of,” she said. “In general, I would say [my favorite] is whatever I’m taking right now. Because that’s what I’m living. Classes that I’ve taken over the past four years, they have become a part of me. And some of them come back to me at odd moments.”

Program started in 1973, has evolved

The program began in 1973 when the Board of Regents approved a policy of cost-free auditing of classes for seniors. That winter, only four seniors enrolled.

But because the initial policy did not require auditors to be Wisconsin residents, soon seniors from Florida and New York would fly in and overwhelm classrooms. For this reason, the Board of Regents ended the free policy and started making seniors pay in 1991.

In 2000, the Wisconsin State Legislature instituted its own mandate requiring UW System schools to allow seniors to audit classes. Since then, the numbers of auditors have exploded. In the fall of 2000, 112 seniors were enrolled. This semester, 760 were enrolled – and the number is growing by roughly 100 each year.

Anne Niendorf, associate student services coordinator at UW’s Adult Career and Special Student Services department, is the point of contact for senior auditors and assists them with admission, course selection, and enrollment. She said the program has been tremendously successful and inclusive.

“[Auditors come] from all walks of life too,” she said. “It could be people who don’t have a degree all the way up to people who have their PhD.”

Learning history they lived through

Ray McCool, 88 years old, has audited classes for 17 years, almost entirely within the History Department. This semester he took a class on the history of the Holocaust, a time he’s old enough to remember living through. He was 15 when the war ended.

“None of us knew much about what was really going on in Germany,” he said.

Then, in 1945, Life Magazine came out with a spread with what the military had found when they opened up some of the concentration camps. He said people could not believe it.

He has a bachelors, masters, and doctorate degree from UW, which he attained in between serving in the Army, working in the telecommunications industry – a time in his life he called “boring as hell” – and working with handicapped students within the Madison school system for 17 years.

After retiring in 1999, the senior auditing program allowed him go back to studying what he loves – his favorites are American history, WWI, WWII, and the Depression.

“I see a lot of people my age kind of fade away. Maybe there’s physical problems, health problems, I certainly recognize that. But I thought I’m not going to do it that way,” he said. “And of course it’s kind of fun.”

John Terry Jr., 62 years old, never went to college. He was an alcoholic, diagnosed with mental illness, and homeless for several years. He said he wasted his time and his life when he was younger.

For the past few years, he has audited one class each semester in a wide variety of classes, from Roman architecture to contemporary politics. His new kick is art history.

“There’s a lot of sadness in the world, a lot of anger in the world,” he said.
“These art classes are my escape from reality. That’s why I take them.”

The pain of being homeless on the streets, especially during brutally cold winters, still sticks with him. He said most homeless people are concerned above all else with getting off the streets and finding a place to live. But, when he donates time at homeless shelters like Porchlight and the Beacon, he will sometimes talk with the homeless about what he’s learned in class.

“Just because you’re homeless does not mean that you’re a dummy,” he said. “I have talked to different people about … the classes that I’m taking. They ask me questions and I give them answers. It makes them feel like they’re not homeless for that fleeting moment.”

‘All actual life is encounter’ 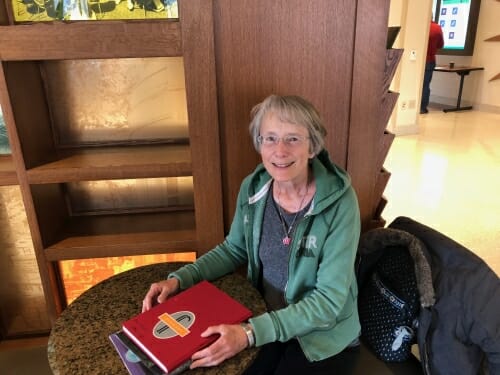 Jen Roth sits with her notebook, class materials, and other personal items she has collected while on campus. CREDIT: PARKER SCHORR

Roth graduated from college, but she deeply misconstrued what its purpose was. Pulling out a corner of notebook paper with the phrase “All actual life is encounter” written on it – a quote from the philosopher Martin Buber that was discussed in her existentialism class – she said it took until she retired to understand what it was really all about.

“When I was in college, I didn’t think about it as, ‘I’m here to learn about what there is to be learned.’ I thought of it as a way to gain credits towards getting a degree. I couldn’t wait to get on with my real life. Now I can be the student I wish I could have been back then,” she said.

It’s not just the lectures that keep auditors coming back year after year, but also the relationships that are formed inside and outside of the classroom.

Terry said he loves being surrounded by young people and their fresh ideas. Inspired to represent both the student population that he had become connected to and the homeless people of Madison, he ran for common council Alder of the 9th district, a predominately student population, in 20187. With very little campaigning, Terry garnered 24 percent of the vote.

McCool has gotten lunch with a few of his professors and he said they like having him and other auditors in the class since they can offer a different perspective on a topic at hand. Plus, now that he’s older than them, he can finally talk to them on a first name basis.

She pitches the program to anyone she meets, but especially to young people, because she wants them to know that the often exhausting, grinding process of getting a degree is not the only path for an education.

“After your arc – your arc of school and career and family making – there’s something else that waits you on the other end of it that you’re going to just love,” she said.