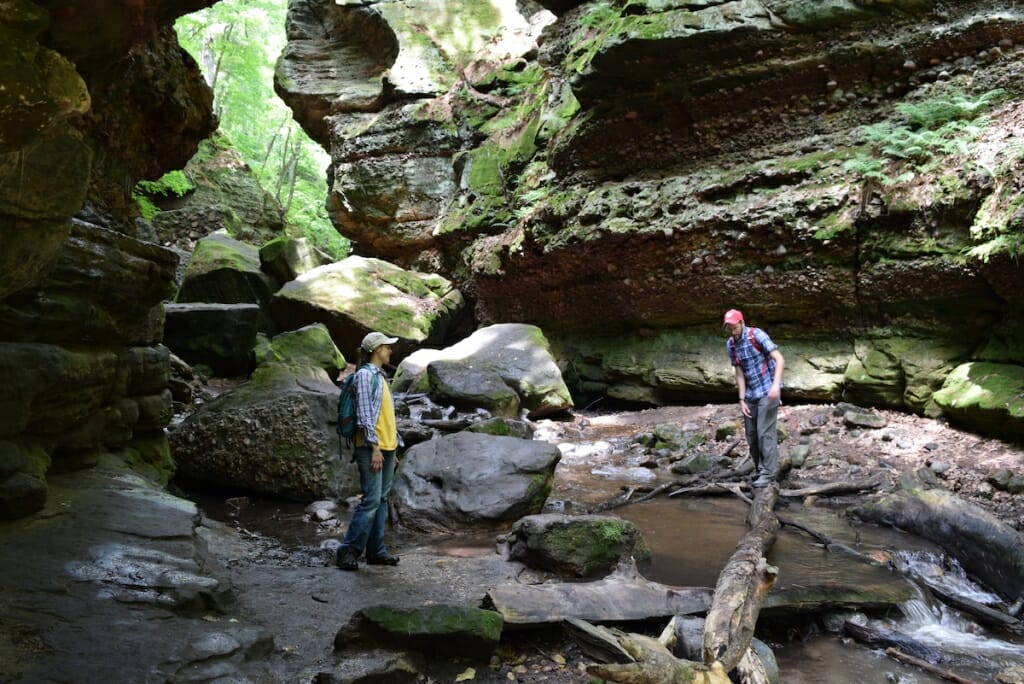 Esther Stewart, left, and Ian Orland, a program coordinator at Wisconsin Natural History and Geologic Survey, scope out the rocks at Parfrey’s Glen State Scientific Area. The layers of cobblestones show turbulent water flow, and contain suggestions about speed, direction and duration of the flood. Cobbles left behind during stormy periods are separated by fine-grained sedimentary rocks that formed in calmer waters. Photo by David Tenenbaum

Esther Stewart makes a living poking around in the basement. The geologic basement beneath Wisconsin, to be exact. While Wisconsin has a reputation as a planar state, with vast flatlands and gently rolling hills, the basement is a real bag of tricks.

We know a lot about the surface rocks, Stewart says, but the basement is another matter. It’s deep, dark, mysterious. An irresistible lure for a curious mind.

We had five questions for Stewart, who is employed as a geologist by the Wisconsin Natural History and Geologic Survey within UW-Madison’s Division of Extension. 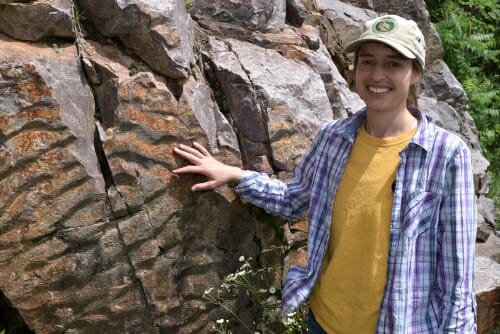 1. What’s the big picture question you’re trying to solve? What “keeps you up at night”?

I focus on “basement rocks” that are usually hundreds of feet below land surface, though they are near the surface in a few areas. These rocks are more than 1 billion years old, so my quest is to piece together the oldest puzzle pieces that make up the basement here in Wisconsin. What different kinds of rocks are buried underground and where are the major boundaries that separate rocks of different ages? These fundamental questions seem remote, and are remote, but answering some of them helps us understand Wisconsin’s natural resources.

We look for borders – faults – between basement rocks, where the rock age can vary by hundreds of million years. Already, we’ve found evidence that one accepted boundary, cutting across the Wisconsin-Illinois border, may need to be moved northward. 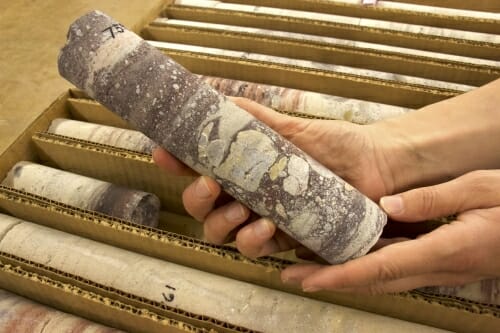 This conglomerate rock was collected about 760 feet below land in Dodge County. The collection zone near the boundary between Cambrian sandstone (about 520 million years old) and underlying Precambrian quartzites (about 1.7 billion years). The dark red rock is fine-grained silt and sandstone. The white rock contains pebbles and coarse-grained sandstone. Photo by David Tenenbaum

Faults are fundamentally weak, and over geologic time, they tend to be reactivated. One rule in geology is that what happened in the past can happen again. So one side of a fault might be uplifted to form mountains, and then hundreds of millions of years later water focused by the fault can deposit minerals. That’s what explains the lead-zinc deposits in southwest Wisconsin.

2 What does your day–to–day work involve?

In my field, it’s very expensive to get data. We start with existing studies, geophysical data based, for example, on airplane geomagnetic surveys, topographical maps, and 100 miles of drill cores stored at Mt. Horeb. Drilling to get cores produces high-quality data, but you have to do it in the right spot, which can involve some tricky decisions, and it’s costly. So we also get cuttings from deep water-wells, showing what kind of rock they pass through. 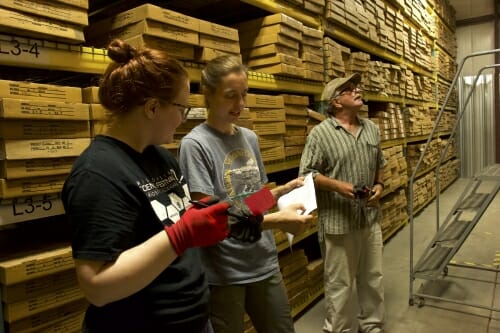 Much of our data can be interpreted reasonably in several ways, so one strategy is to find as many different kinds of data as possible, which narrows down the possible interpretations.

3 If you had unlimited research money, what would pie in the sky look like?

I’d drill a series of holes targeting the different rock bodies in the basement, and use the latest technology to assess mineral content, isotopic content, age, past magnetism and structure. This information could help define the puzzle pieces that make up Wisconsin’s basement, by homing in on which geologic units exist underground, and what the contacts between them looks like.

4 Why should we care about the deep geology of Wisconsin?

Lots of reasons. Part of it is curiosity. Wisconsin’s basement geology preserves the fundamental pieces that came together to build the foundation of North America. These rocks hold clues about how Earth’s environment changed over several billion years.

There are practical reasons. There’s a saying in economic geology: If you use it and it doesn’t grow, it came from underground. It’s a long list: Fossil fuel. Minerals. Metals. The materials of concrete and asphalt. Plastic. Many fertilizers. They all come from underground.

Water drillers are inherently interested in geology. There are low spots in the basement where denser, briny groundwater – stuff that’s too salty to drink– is thought to be trapped. So the Precambrian geology is not just a memory!

In the 1820s, the lead miners called “badgers” were the first large white presence in the future state, and although the lead and zinc mines in the southwest have long closed, we still root for the Badgers!

5 What’s the biggest misconception you hear about Wisconsin geology?

That it’s simple. In fact, you can see most of earth’s history preserved in Wisconsin; it’s incredibly complicated, and very old. We know a little about it, but not much. It’s variable and can’t be described in just one way, because you are always dealing with the three dimensions, plus more than a billion years of time. and of course, it’s mostly buried. It’s a playground for the curious, but it’s also got implications for today and tomorrow.