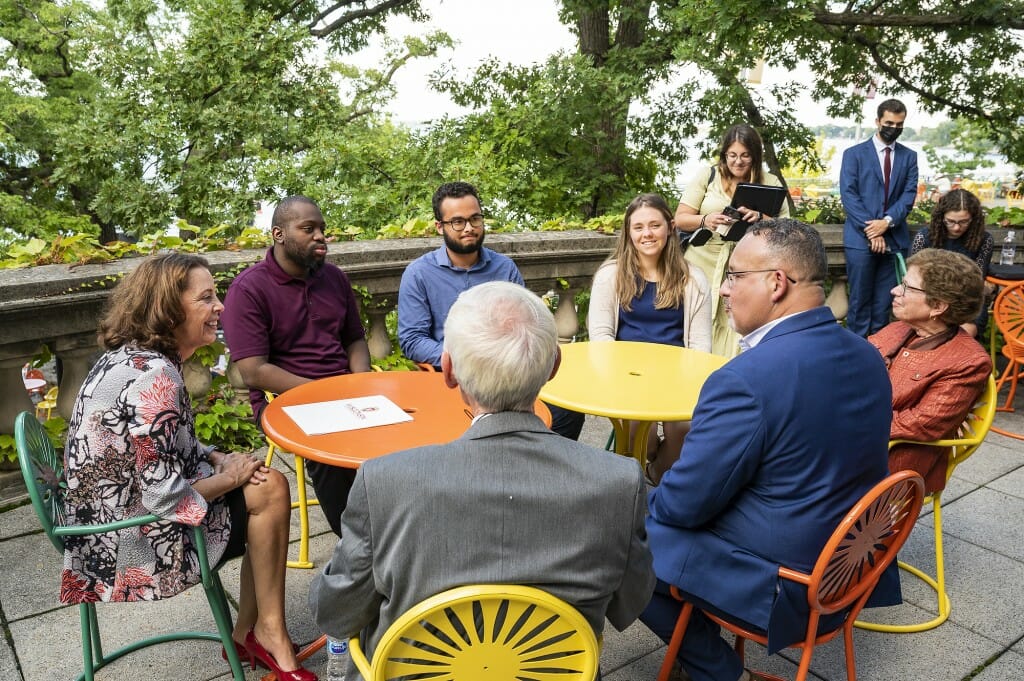 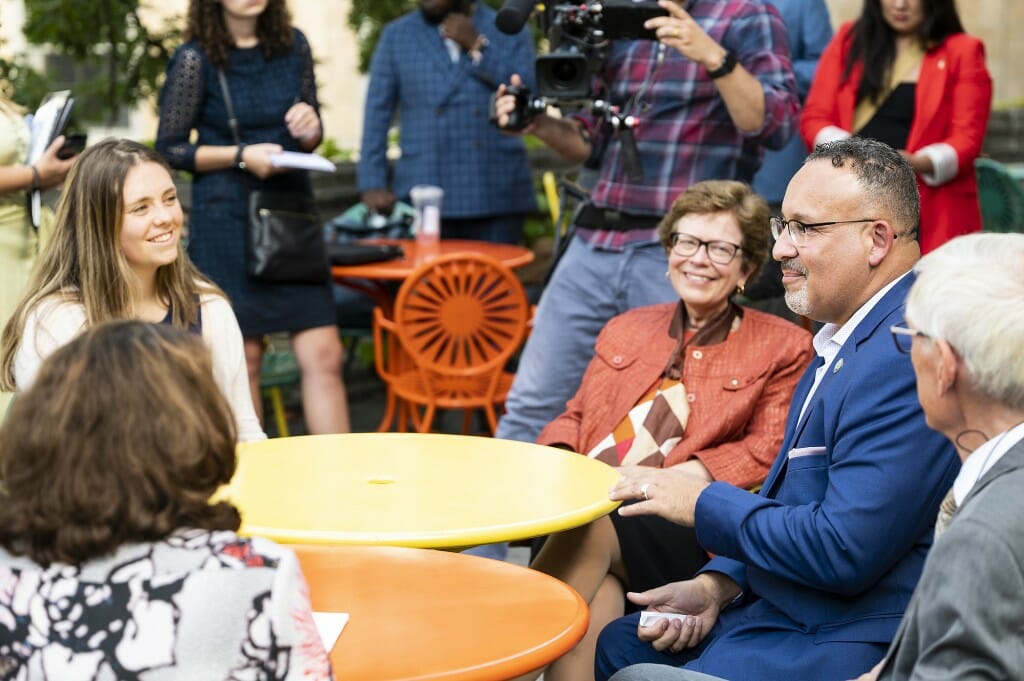 Cardona, flanked by with Wisconsin governor Tony Evers and UW Chancellor Rebecca Blank, meets with students from the School of Education Special Education Program on the Memorial Union balcony. Photo by: Bryce Richter 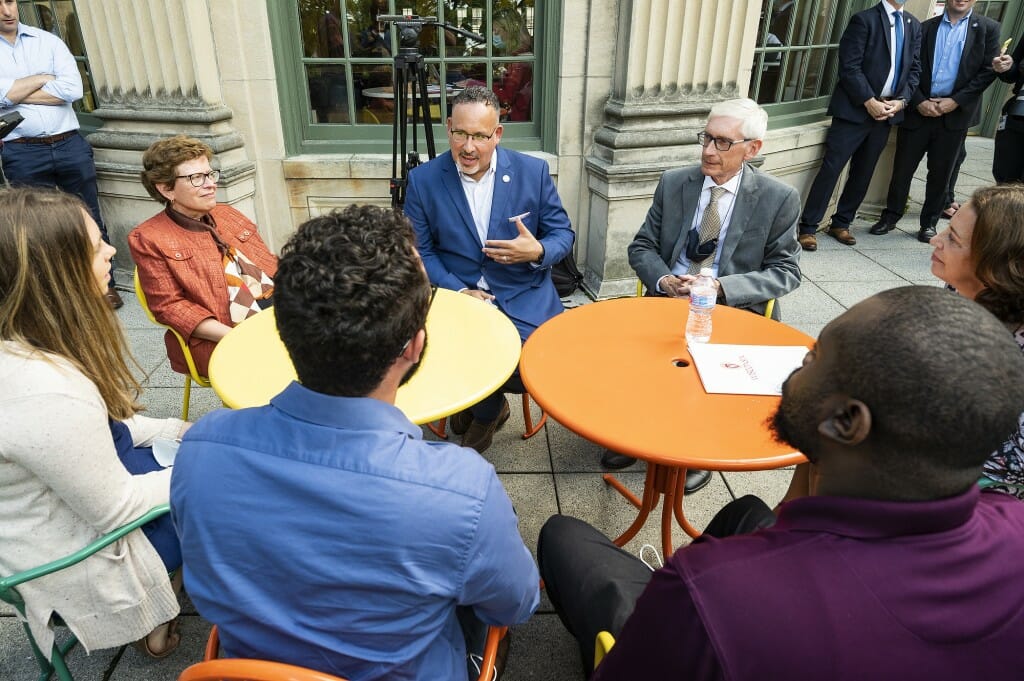 Cardona meets with students from the School of Education Special Education Program on the Memorial Union balcony. Photo by: Bryce Richter 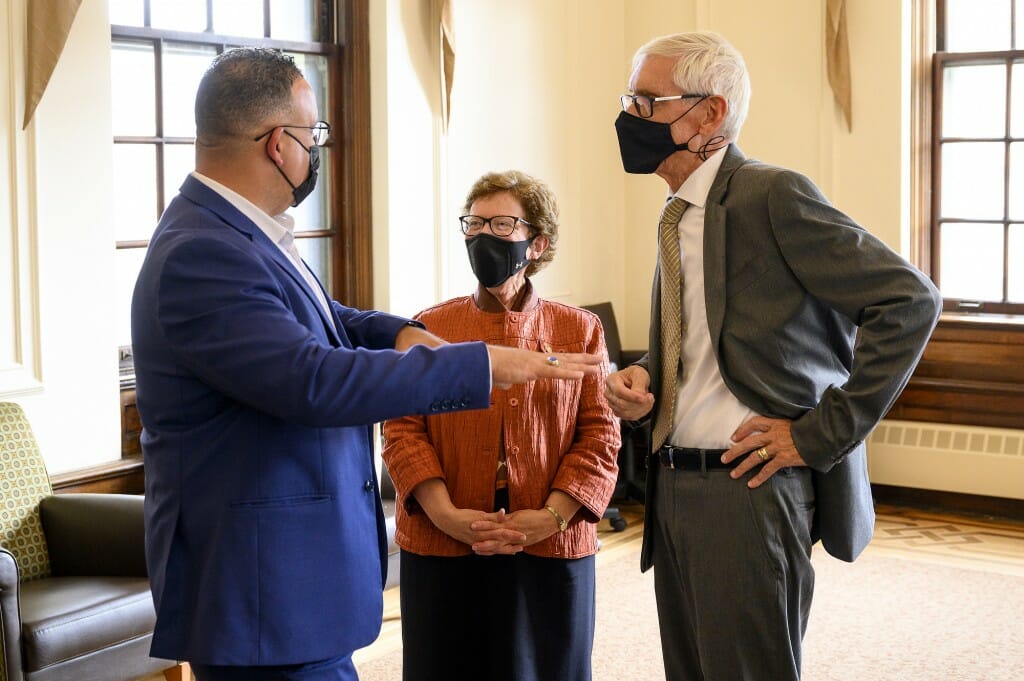 Cardona (left), meets with UW Chancellor Rebecca Blank and Wisconsin Governor Tony Evers (right) at the Memorial Union during a visit to the UW–Madison campus. Photo by: Bryce Richter 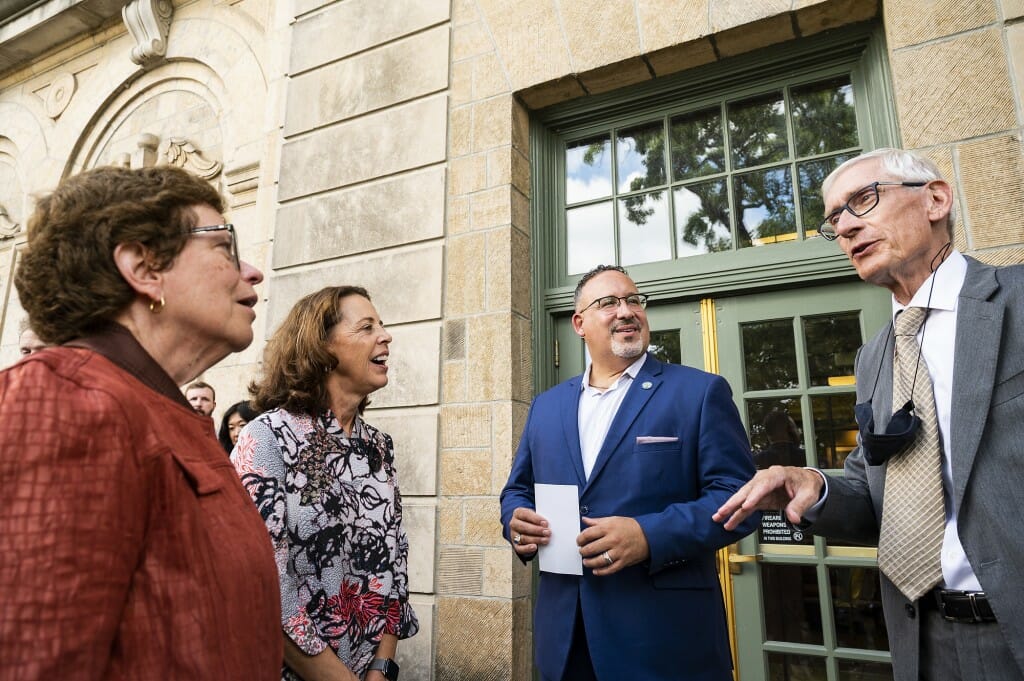 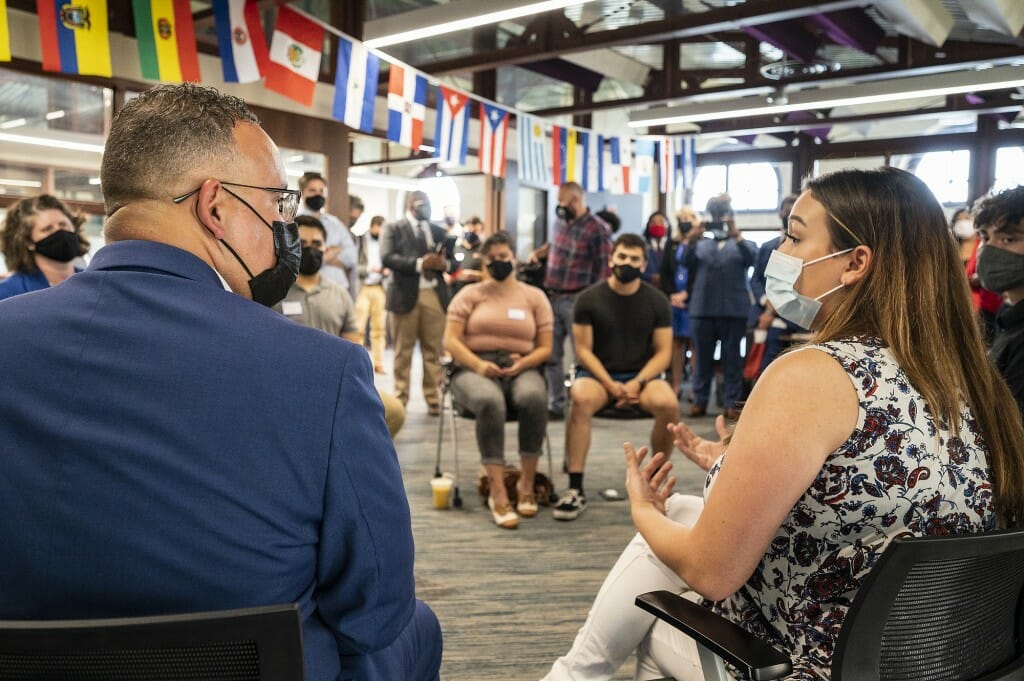 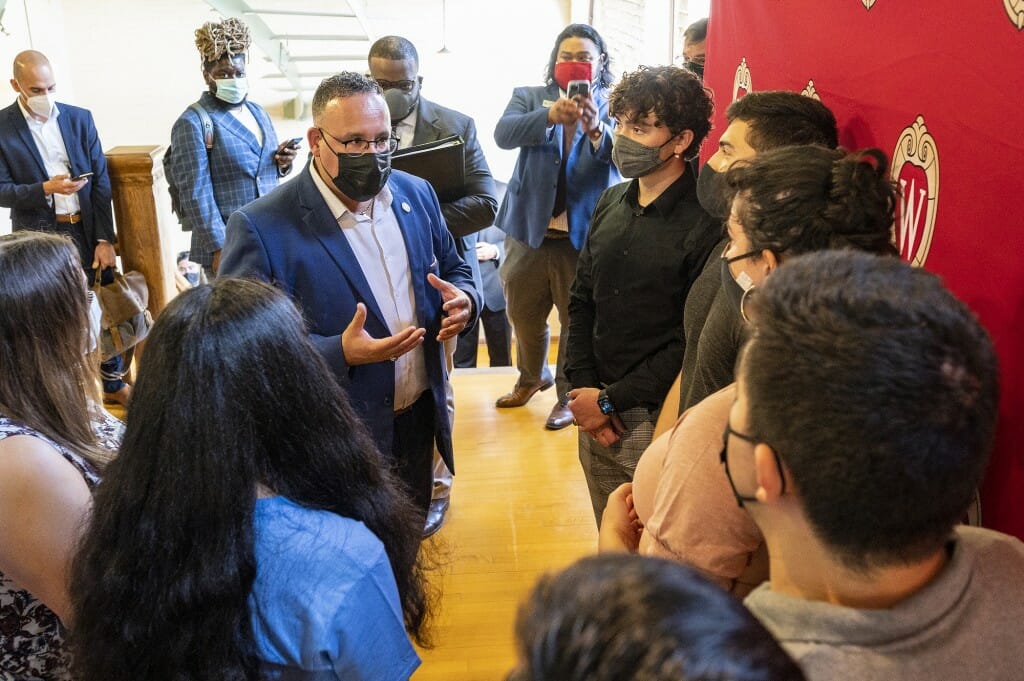 Cardona speaks with students in the Latinx Cultural Center. Photo by: Bryce Richter 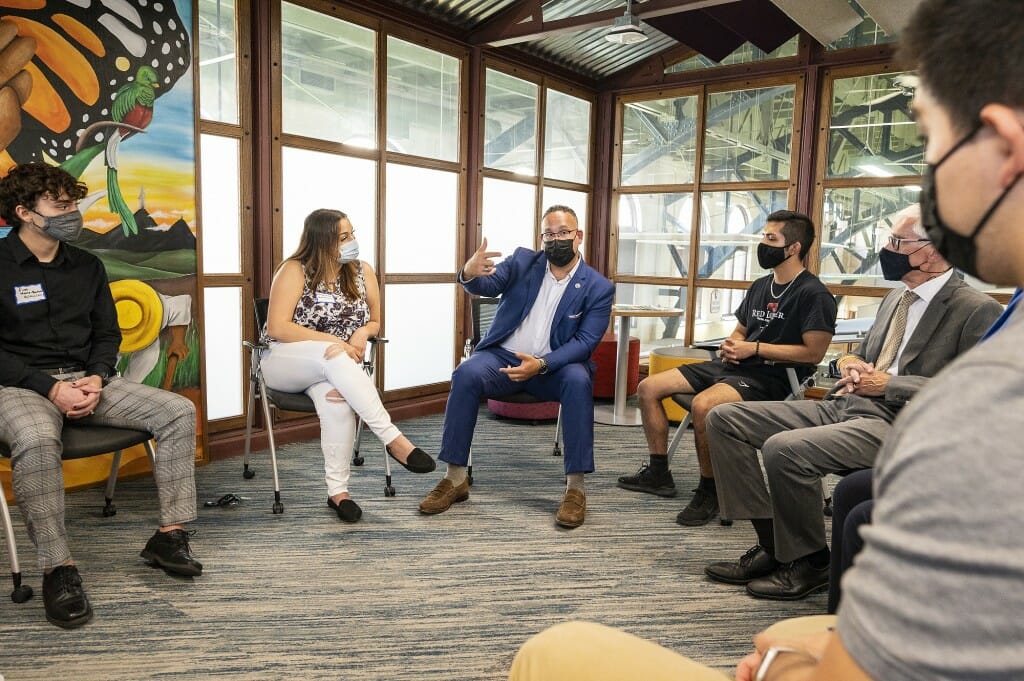 Cardona, meets with students in the Latinx Cultural Center. Photo by: Bryce Richter 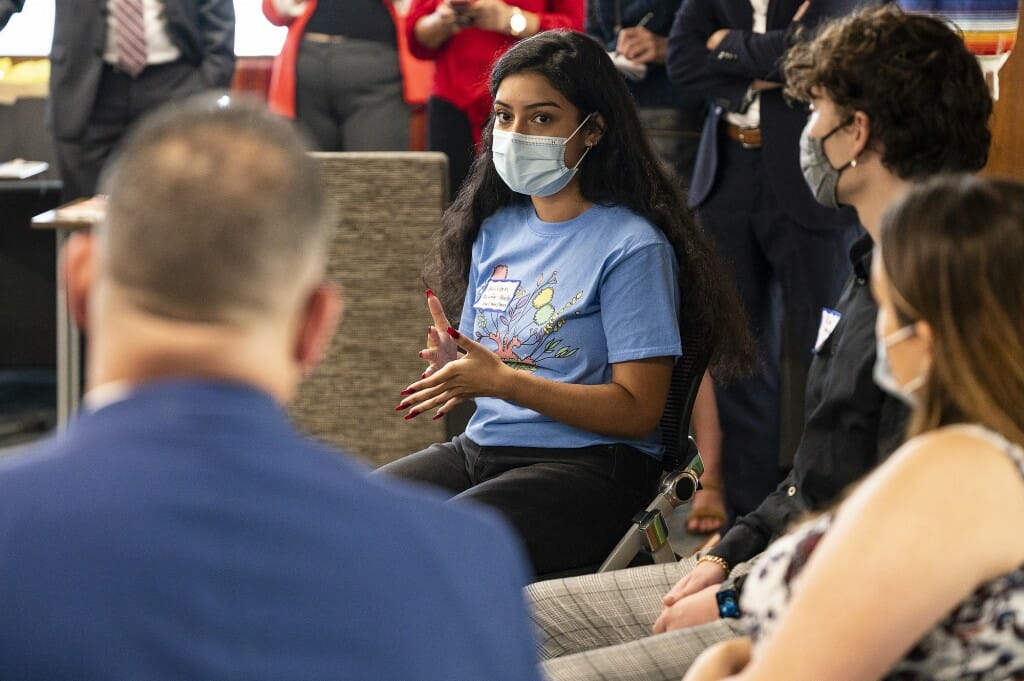 Cardona, listens to students in the Latinx Cultural Center, including Kristen Acuna-Huete. Photo by: Bryce Richter 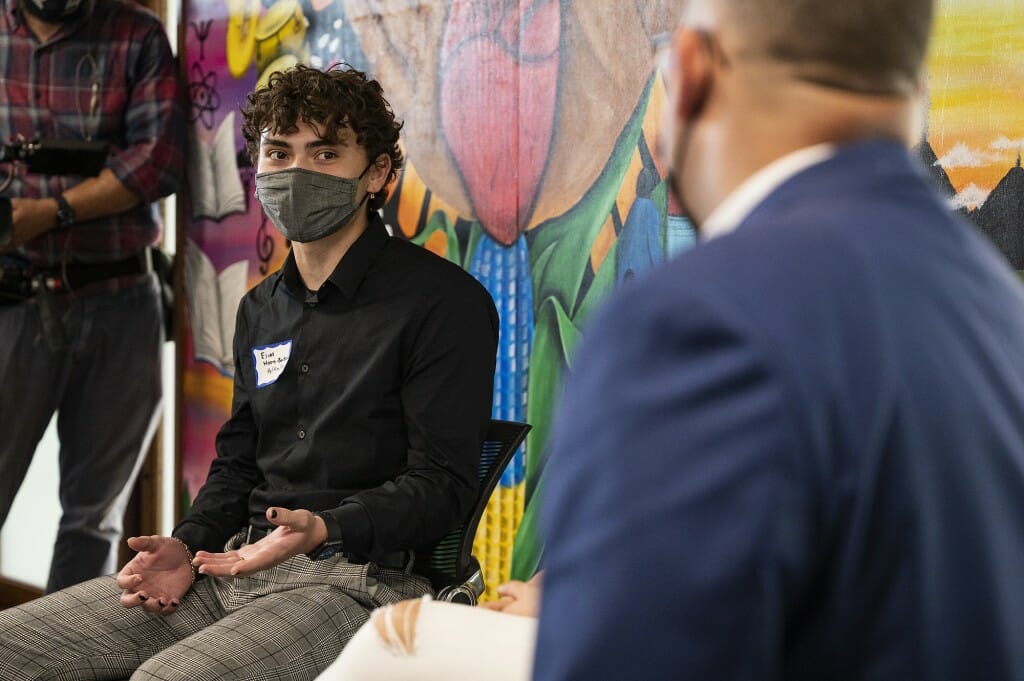 Cardona talks with Elias Moore-Barbosa in the Latinx Cultural Center in the Red Gym. Photo by: Bryce Richter 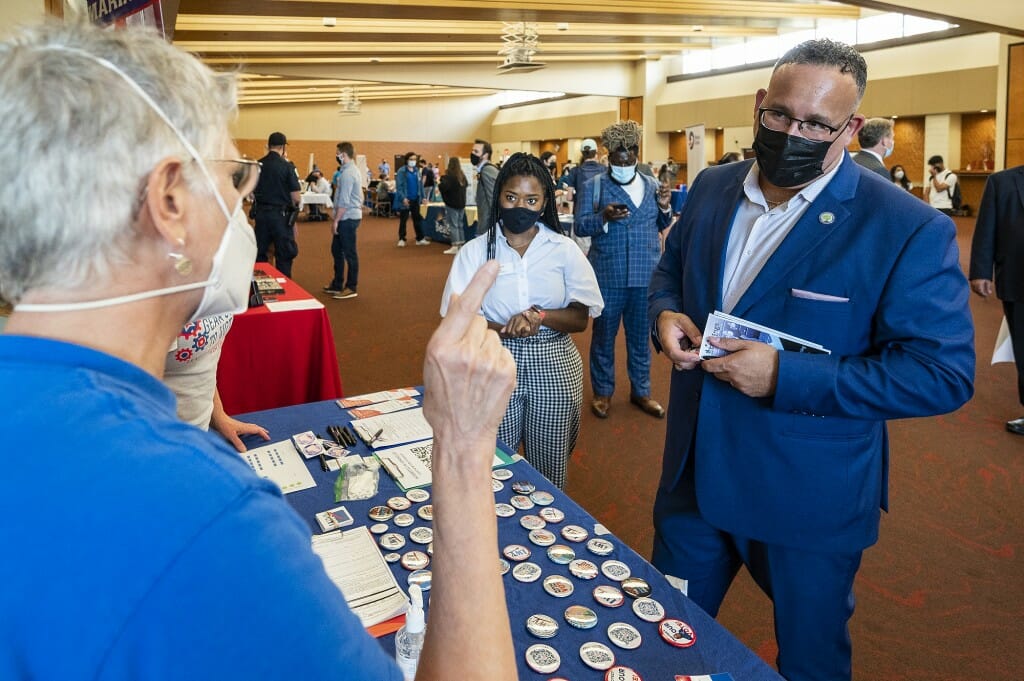 Cardona talks with representatives from the League of Women Voters taking part in the Public Service Fair. Photo by: Bryce Richter

Two current students and a recent graduate of an innovative UW–Madison special education teacher preparation program received the unique opportunity to meet and speak with U.S. Secretary of Education Miguel Cardona during a campus visit Monday.

“I don’t foresee myself going into politics, so an opportunity like this will probably never come up again,” said Catherine Arneson, who is pursuing her master’s degree through the UW–Madison Special Education Teacher (UW-SET) Residency program. “I was a bit nervous, but it was just incredible.”

“Secretary Cardona was very passionate about education in general, and special education in particular,” said Bo Blocker, who graduated from the UW–SET program in August and is now teaching special education in his hometown of Beloit, Wisconsin. “He was so positive and thinking of ways to make positive change through policy and culture, and about ways to uplift the teaching profession. It was a great conversation.”

Arneson and Blocker were accompanied by another current UW-SET student, David Tejada. Along with Cardona, they sat around two Terrace tables that were pushed together on the Main Lounge Deck off of the second floor of the Memorial Union.

Joining them in a conversation that lasted about 20 minutes was Wisconsin Gov. Tony Evers, UW–Madison Chancellor Rebecca Blank, and School of Education Dean Diana Hess.

Cardona was on the UW–Madison campus for a couple hours Monday afternoon as part of a “Return to School Road Trip” — a five-day bus tour in the Midwest to highlight students and communities safely returning to in-person learning. The tour started with a pep rally at an elementary school in Eau Claire Monday morning before heading to Madison.

Cardona was welcomed to campus by Blank at the Memorial Union, where Evers also joined the group before they ultimately made their way to the Main Lounge Deck that overlooks the Terrace and Lake Mendota.

After Hess greeted Cardona and introduced them to Arneson, Blocker, and Tejada, she provided a high-level overview of the UW–SET program — noting how students graduate with a master’s degree and Wisconsin teacher licensure in special education in 14 months.  As part of the program, each graduate student takes part in a 10-month teaching residency in a partner school in Wisconsin, gaining the knowledge and skills to meet the needs of students with disabilities in these districts.

To incentivize people to enroll in the UW–SET program, students receive a stipend of $38,800 during the course of their residency. In return, they commit to teach three consecutive years in a partner district. Hess added how this initiative — which prepares future special education teachers to work in high-need and small, rural districts — is made possible by a $2.5 million U.S. Department of Education Teacher Quality Partnership grant.

Hess went on to explain how students can receive additional significant support by taking advantage of the UW–Madison School of Education Wisconsin Teacher Pledge program that was launched in 2020. This initiative “pledges” to provide financial support — including up to in-state tuition, fees, and testing certification costs — for students enrolled in any of the School’s teacher education programs.

In return, after graduating, the students “pledge” to teach for three or four years at a pre-kindergarten through 12th grade school in Wisconsin. Students who go on to teach in a high-need district (including rural areas) or in a high-need subject area (including special education) will fulfill their obligation in three years, while all others will do so in four.

Hess noted how the Teacher Pledge is funded by generous donors to the School — and is also being actively researched to understand the true impacts of the program and whether it’s a model that can be scaled widely.

“What the UW–SET program reinforces for me is how important it is to have support from the federal government for important goals,” said Hess. “Without $2.5 million in support from the U.S. Department of Education, we wouldn’t have UW–SET. And similarly, without significant donor support we wouldn’t have the Teacher Pledge. Investments like this are vital for teacher education.”

UW–SET program graduates are also given two years of induction support, delivered by School of Education faculty and staff, to make the transition from residency to a full-time special education teacher as smooth as possible. This support includes professional development, participation in an online community of practice, and site visits, if needed.

“The secretary really understood what this program was doing and what it’s offering,” said Arneson, who is utilizing the Teacher Pledge and doing her teacher in residence work in rural Juda, Wisconsin. “He asked us, ‘What should I bring back to the White House regarding special education?’ That was so great to hear because I feel like there isn’t a lot of conversation going on around special education. But he is serious about improving our field and how we can better serve our students.”

Cardona and his team wrapped up their visit by having campus student tour guides lead them to the Public Service Fair at the Gordon Dining and Events Center. This in-person fair provided students of all majors the opportunity to connect with local, state, and national nonprofit agencies. Students could connect with people from these organizations to find volunteer opportunities, jobs, and internships that match their interests, major, and career goals. The event was open to all enrolled students, plus UW–Madison alumni who graduated in the past two years.

Cardona’s road trip features a range of meetings and events with local school leaders, parents, students, educators, and more — and continues Tuesday through Friday with stops across Illinois, Indiana, Ohio, and Michigan.

“Secretary Carona really seemed to appreciate hearing about the UW–SET program,” said Tejada, who is utilizing the Teacher Pledge and is doing his special education teacher residency in Beloit. “Who knows, maybe we’ll see this program used in other parts of the country.”