As a former elite-level skier, runner and cyclist, science journalist Christie Aschwanden found herself curious about the notion of recovery. What is it, exactly, and how do scientists measure it? With all of the products available to the weekend warriors in all of us, which are actually backed by scientific evidence? 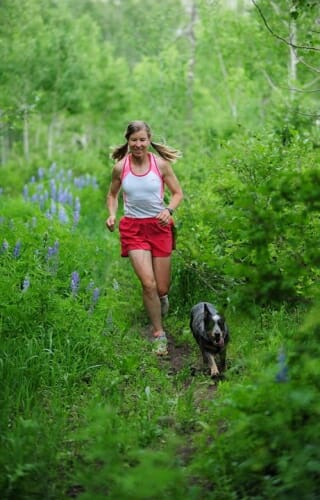 By the time she did the research for her recent book, Good to Go: What the Athlete in All of Us Can Learn From the Strange Science of Recovery, she not only found answers, she also found a powerful reminder of how science itself works, and how science is often used and manipulated for marketing’s sake.

Aschwanden, who for years was lead science writer for FiveThirtyEight and is a former health columnist for the Washington Post, will be at the University of Wisconsin–Madison from Oct. 14 through 18 as the fall Science Writer in Residence. She will spend her time visiting classes, meeting with students and faculty, and participating in a panel discussion as part of the Wisconsin Science Festival.

That discussion, titled: The Use and Abuse of Scientific Evidence, is free and open to the public. It will take place on Wednesday, Oct. 16, from 5:30 until 6:30 in the DeLuca Forum at the Wisconsin Institutes for Discovery, 330 N. Orchard St., Madison, Wisconsin, 53715. The panel will also feature Deborah Blum, author of this year’s UW–Madison Go Big Read selection, The Poison Squad, and director of the MIT Knight Science Journalism program, as well as UW–Madison history of the health sciences librarian Micaela Sullivan-Fowler. It will be moderated by Sharon Dunwoody, Evjue-Bascom Professor Emerita at the School of Journalism and Mass Communication. Beginning at 5 p.m., Steenbock’s on Orchard will offer drinks and light snacks for purchase.

Aschwanden has long been interested in how science works, writing about everything from the power and limitations of statistical analysis to the perils of too much medical treatment. She has won numerous awards and was a finalist for the National Magazine Award. Her writing has also appeared in dozens of publications, including the New York Times, Popular Science, Discover, Consumer Reports, Slate, Smithsonian, and O, The Oprah Magazine.

Aschwanden also teaches writing workshops across the U.S. and is co-host of a podcast about the creative process, called Emerging Form. She still enjoys time on the trails near her home in western Colorado, where she and her husband live on a winery and small farm.

This is the 33rd year of UW–Madison’s Science Writer in Residence Program, which each semester brings nationally-and-internationally-recognized science journalists to campus to share their work with the university community and the public. The program is a partnership between the School of Journalism and Mass Communication and University Communications.

Past writers in residence include Ed Yong of the Atlantic, freelance journalist Alex Witze, Spectrum founding editor Apoorva Mandavilli and many others, including Pulitzer Prize winners, such as the Milwaukee Journal Sentinel’s Mark Johnson.

The program was established in 1986 through the support of the Brittingham Trust and it continues with support from the University of Wisconsin Foundation.