Sami Schalk, an associate professor of Gender and Women’s Studies, has been named one of the 2021 Outstanding Women of Color in Education by UW System, as part of the organization’s annual recognition of educators who advance equity and inclusion for people of color within the UW System, as well as communities across the state. 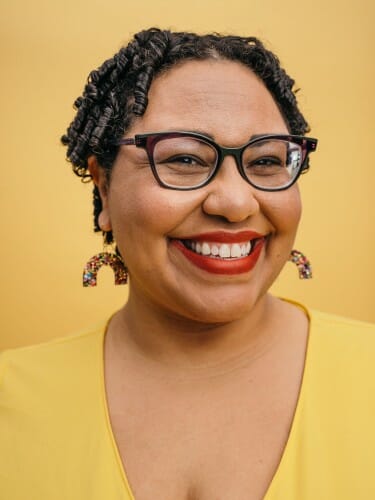 Schalk, who received tenure in 2020, is the author of the 2018 book “Bodyminds Reimagined: (Dis)ability, Race, and Gender in Black Women’s Speculative Fiction.” Her research focuses on disability, race and gender in contemporary American literature and culture, with an emphasis on African American and women’s texts. She frequently contributes essays to a long list of national publications and has long been a voice for and champion of marginalized groups.

Earlier this year, Schalk received a UW–Madison Chancellor’s Distinguished Teaching Award for Inclusive Excellence for her efforts to promote diversity and inclusion in the classroom. Her then-department chair, Professor Janet Sibley Hyde, described her as “an engaging and impactful teacher.”

“The work of addressing racism and sexism on campus, in Madison, in Wisconsin and beyond is continual and ongoing labor that falls heaviest on women of color like myself,” says Schalk.  “I’m honored to be named one of the Outstanding Women of Color in Education for UW–Madison and the UW-System this year and to have my contributions to social justice and liberation as a scholar and activist recognized at this level. I look forward to continuing to advocate for a better campus, city, state and world for myself and all marginalized people.”

Schalk and the other thirteen winners received their awards at a reception hosted earlier this month. The full list of winners is viewable here.