Roses are red; write a love poem this Valentine’s Day 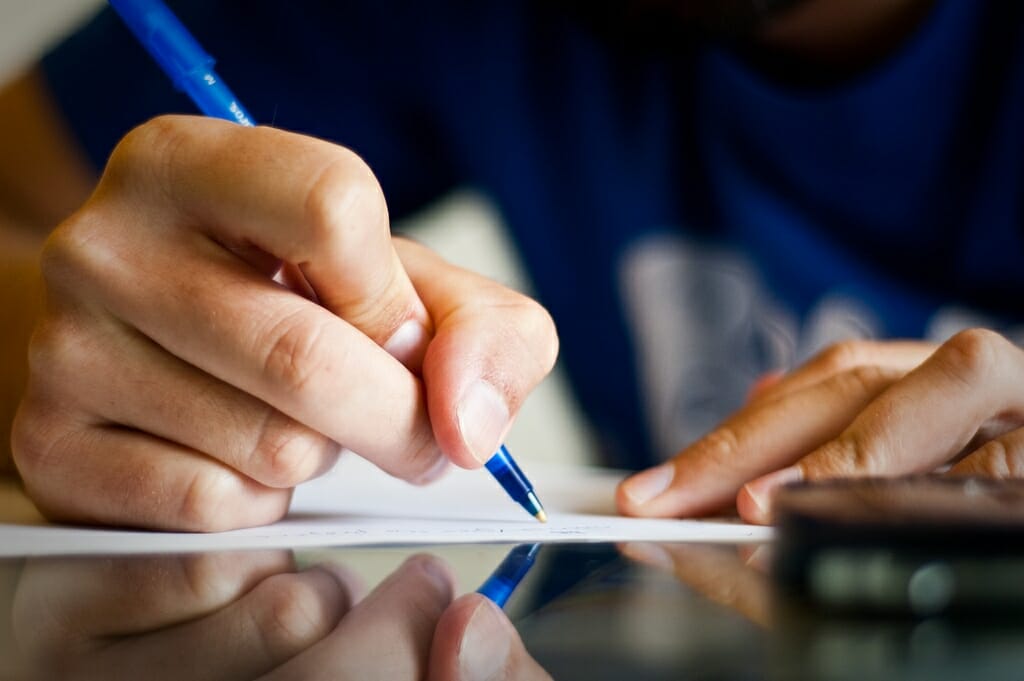 Don’t be afraid to sit down and write a poem. Courtesy of Flickr user Lucas

MADISON – How do you love thee? Why not write the ways.

Valentine’s Day is the perfect opportunity to think outside the heart-shaped chocolate box by putting pen to paper and writing a love poem. (It’s also a bit easier on the pocketbook.)

Maybe you’re a poet and you just don’t know it. Luckily, writing poetry is something anyone can try, says Joshua Calhoun, an assistant professor of English at the University of Wisconsin–Madison.

“There’s no regulatory body or mandatory poet’s license, as far as I know,” Calhoun says. “But if there were, and if someone put me in charge and said I should design some pre-requisites, I’d require reading, reading, reading. There may be some good poets who are not good readers, but I couldn’t name one.”

As a Shakespeare professor, Calhoun naturally recommends the Bard.

“But Natasha Trethewey’s poetry has most surprised and affected me lately. And Lauryn Hill’s poetry (in musical form) has been on repeat for me. Oh, and this absolutely terrific book that is a series of beautifully rendered poems and woodcuts memorializing animals we’ve lost: Swan Song: Poems of Extinction by J. Patrick Lewis (woodcuts by Christopher Wormell). I realize that extinction and Valentine’s Day may seem to be an odd combo, but Shakespeare’s ‘Sonnets,’ too, are about memorializing someone who will age and eventually cease to exist.”

Besides being inspired by the words of others, Calhoun suggests drawing inspiration from your beloved.

“Poetry surprises us with truth sometimes. In the word wrangling, you might find a true thing about yourself or about someone you love,” Calhoun says. “You might show someone you care about some true thing they didn’t know about themselves, and they might carry that truth in their pocket for the rest of their life.”

Sounds pretty good, doesn’t it? But how?

“Poetry surprises us with truth sometimes. In the word wrangling, you might find a true thing about yourself or about someone you love.”

A few dos from Calhoun:

Consider playing with sounds instead of rhymes. Example: Walt Whitman’s ‘A Glimpse.’

“Consider finding what’s precisely true about your love instead of settling for vague compliments. ‘Love Poem’ by John Frederick Nims stuns me every time I reread it. His mistresses’ eyes are nothing like the sun (as Shakespeare says in Sonnet 130) —  she has a habit of clumsily breaking things — but Nims longs for her to ‘Be with me, darling, early and late…For should your hands drop white and empty / All the toys of the world would break.’

Write an aubade, a poem in which you complain about having to get up when the person you most want to spend the day with is next to you in bed. See John Donne’s ‘The Sun Rising’ for a classic example.

“Thou shalt not punctuate the ending of every line.

Don’t be afraid to turn a poem into a letter if your words refuse to get in line.

Don’t get a tattoo of your poem — at some point you’ll want to ‘fix’ a line or two, and you’ll obsess about it every time you swim, and lakes are for swimming, not line editing.”

Maybe you’re worried that the thought won’t count as much as a beautiful bouquet of a dozen roses. Calhoun gets it. But consider Shakespeare’s “As You Like It.” Orlando runs around the Forest of Arden writing lots of laughable poetry. There’s even part of a scene devoted to characters reading this poetry out loud and laughing at it, not Orlando’s intention.

“Orlando is never going to win a poetry contest, and yet his poems find a way to the person he loves, Rosalind, who just happens to be one of Shakespeare’s most brilliant, kind, witty, capable characters. And once she’s done making fun of his lousy poetry, she marries Orlando,” Calhoun says. “Turns out that sometimes embarrassing can also be charming and endearing.”