BURRIS: Well in any case, they got this strain and then it was mutated again with X-rays and then it was selected and the strain was sent down here and Johnson and Peterson and their group found that this would produce in submerged fermentation, if you handled the medium properly. 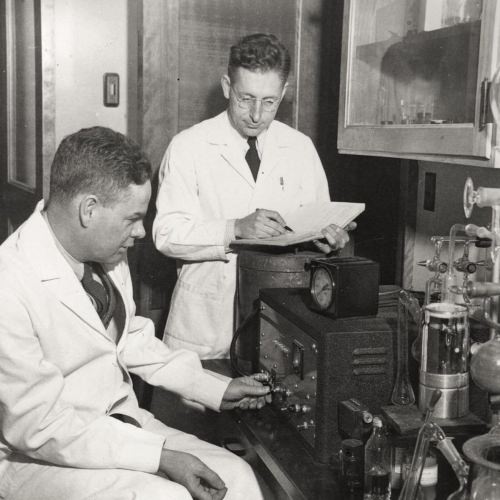 Dave Perlman, who I mentioned was dean of the Pharmacy School here, Dave was working down here in Johnson’s lab and Henry Koffler was a new recruit up in bacti.  And Henry and I and Dave Perlman worked together trying to figure out the fermentative changes.  To see at what stage in the fermentation there was an alteration and penicillin was elaborated.

It turned out that in submerged culture that you didn’t get any penicillin at first.  Then there was a stage at which penicillin was elaborated but it disappeared so you had to get it at the right stage.  It was dependent upon the sugar you used.  For a long time they used lactose as the sugar.  Eventually they found they could use other sugars if they controlled the fermentation properly.

So we were following this aspect, the metabolism, the elaboration of penicillin and what changes you could make in the fermentation conditions to increase the yield.  Well this mutant that came through and then was mutated with UV over in botany turned out that you could operate in submerged culture and you could produce substantial amounts, and this strain was distributed from here then.

As I said, it was a collaborative effort.  It was sent to all the penicillin producers in the country.  Every pharmaceutical company got it.