For tens of thousands of years, Aboriginal Australians have created some of the world’s most striking artworks. Today their work continues long lines of ancestral traditions, stories of the past and connections to current cultural landscapes, which is why researchers are keen on better understanding and preserving the cultural heritage within.

In particular, knowing the chemical composition of pigments and binders that Aboriginal Australian artists employ could allow archaeological scientists and art conservators to identify these materials in important cultural heritage objects. Now, researchers are turning to X-ray science to help reveal the composition of the materials used in Aboriginal Australian cultural heritage – starting with the analysis of century-old samples of plant secretions, or exudates. 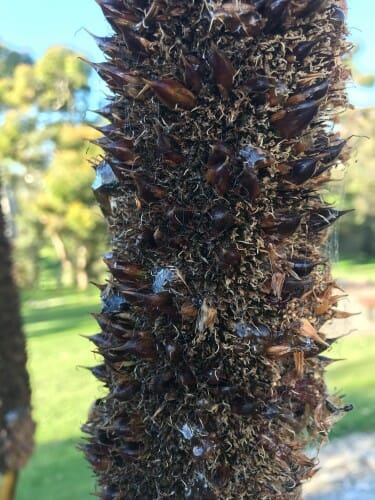 Aboriginal Australians continue to use plant exudates, such as resins and gums, to create rock and bark paintings and for practical applications, such as hafting stone points to handles. But just what these plant materials are made of is not well known.

Therefore, scientists from six universities and laboratories around the world turned to high-energy X-rays at the Stanford Synchrotron Radiation Lightsource (SSRL) at the Department of Energy’s SLAC National Accelerator Laboratory and the synchrotron SOLEIL in France. The team aimed X-rays at ten well-preserved plant exudate samples from the native Australian genera Eucalyptus, Callitris, Xanthorrhoea and Acacia. The samples had been collected more than a century ago and held in various institutions in South Australia.

The results of their study were clearer and more profound than expected.

“We got the breakthrough data we had hoped for,” says Uwe Bergmann, physicist at the University of Wisconsin–Madison and former SLAC scientist who develops new X-ray methods. “For the first time, we were able to see the molecular structure of a well-preserved collection of native Australian plant samples, which might allow us to discover their existence in other important cultural heritage objects.”

Researchers today published their results in the Proceedings of the National Academy of Sciences.

Looking below the surface

Over time, the surface of plant exudates can change as the materials age. Even if these changes are just nanometers thick, they can still block the view underneath it. 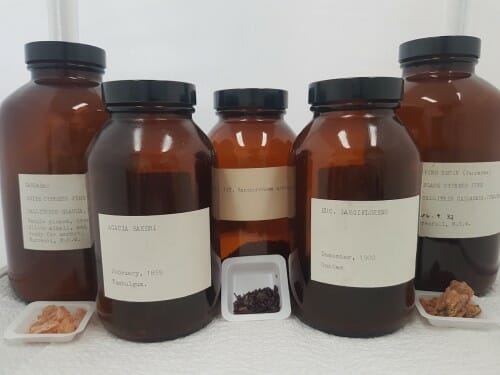 “We had to see into the bulk of the material beneath this top layer or we’d have no new information about the plant exudates,” SSRL Lead Scientist Dimosthenis Sokaras says.

Conventionally, molecules with carbon and oxygen are studied with lower-energy, so-called “soft” X-rays, that would not be able to penetrate through the debris layer. For this study, researchers sent high-energy X-ray photons, called “hard” X-rays, into the sample. The photons squeezed past foggy top layers and into the sample’s elemental arrangements beneath. Hard X-rays don’t get stuck in the surface, whereas soft X-rays do, Sokaras says.

Once inside, the high-energy photons scattered off of the plant exudate’s elements and were captured by a large array of perfectly aligned, silicon crystals at SSRL. The crystals filtered out only the scattered X-rays of one specific wavelength and funneled them into a small detector, kind of like how a kitchen sink funnels water drops down its drain.

Next, the team matched the wavelength difference between the incident and scattered photons to the energy levels of a plant exudate’s carbon and oxygen, providing the detailed molecular information about the unique Australian samples.

A path for the future

Understanding the chemistries of each plant exudate will allow for a better understanding of identification and conservation approaches of Aboriginal Australian art and tools, Rafaella Georgiou, a physicist at Synchrotron SOLEIL, said.

“Now we can go ahead and study other organic materials of cultural importance using this powerful X-ray technique,” she says.

Researchers hope that people who work in cultural heritage analysis will see this powerful synchrotron radiation technique as a valuable method for determining the chemistries of their samples.

“We want to reach out to that scientific community and say, ‘Look, if you want to learn something about your cultural heritage samples, you can come to synchrotrons like SSRL,’” Bergmann says.