Sandra Adell spent months reading everything by Toni Morrison before writing “Literary Masters: Toni Morrison” in 2002. Every book. Every story. Every review.

“It was my passion,” Adell says.

Adell, a literature professor in the Department of Afro-American Studies at UW–Madison, has been teaching the works of Morrison for years and will include “Paradise” this fall.

Tributes for the beloved “Beloved” author have been pouring in since Morrison died Aug. 5 at the age of 88. A former student shared her gratitude with Adell: “You, and Toni Morrison, changed my life trajectory and I will forever be grateful to you for it. Just thought you should know; I hope it gives you a smile.”

Morrison inspired with both her books and her career.

Adell reminds us that “Toni Morrison was a ‘first’ in many ways: as an editor at Random House; as one of the first, and often the only, black woman instructor in the English departments of some of the colleges and universities she taught in before moving permanently to Princeton University; and of course, as the first African American to win the Nobel Prize for Literature in 1993. Her legacy is enormous as is her literary output. Not only did she change the face of American literature: hers became a name known around the world.”

Adell cited an interview in which Morrison said, “My rank in terms of writing is of no interest to me . . . . The truth is that you have to face the blank paper, and labels don’t help you much.” 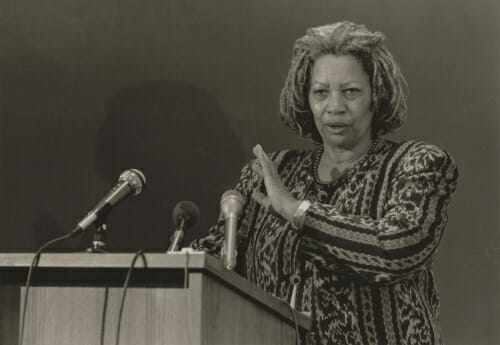 Fortunately, Morrison took those blank pages and filled them with worlds we can revisit.

“I’m not mourning the loss of Toni Morrison because she gave us so much,” Adell says. “This was a woman who up through her 80s was still vibrant and still writing. That’s the inspiration to me to keep doing what I love.”

Adell looks back at a few of the books Morrison gave us:

“When she published her first novel, ‘The Bluest Eye,’ African American women (and other women writers of color) were practically invisible to the literary mainstream. (A notable exception was Maya Angelou, who published her first autobiography, I Know Why the Caged Bird Sings, in 1969.)  ‘The Bluest Eye’ changed that. The mainstream media took notice, as did black women professors and literary scholars working in the newly developing area of black women’s studies. It was primarily through courses taught by African American women and through black women’s book clubs that ‘The Bluest Eye’ began to attract large numbers of readers.”

“‘Sula’ was even more successful and helped to open the door to major publishing houses for other black women writers, some of whom were mentored by Morrison.”

“It’s my absolute favorite because it is so loaded with literary references to mythologies, both Greek and African. It’s just incredibly well-written. Every time I read that book, I find something new. It’s really great to teach because it opens up this world of myth and legend to my students.”

“‘Jazz’ is an experiment in writing. It’s a challenge that requires the reader to be engaged and focused, not a book to take to the beach with you.”

“I told someone once that I felt like I was holding my breath all the time I was reading it. It is breathtakingly beautiful. The way she weaves the stories together is just beautifully told.”

“This is a good introduction to Morrison. It’s an easier read than some of her other books because — the characters are very young and it takes place in 1990s. It’s a little easier to relate to.”