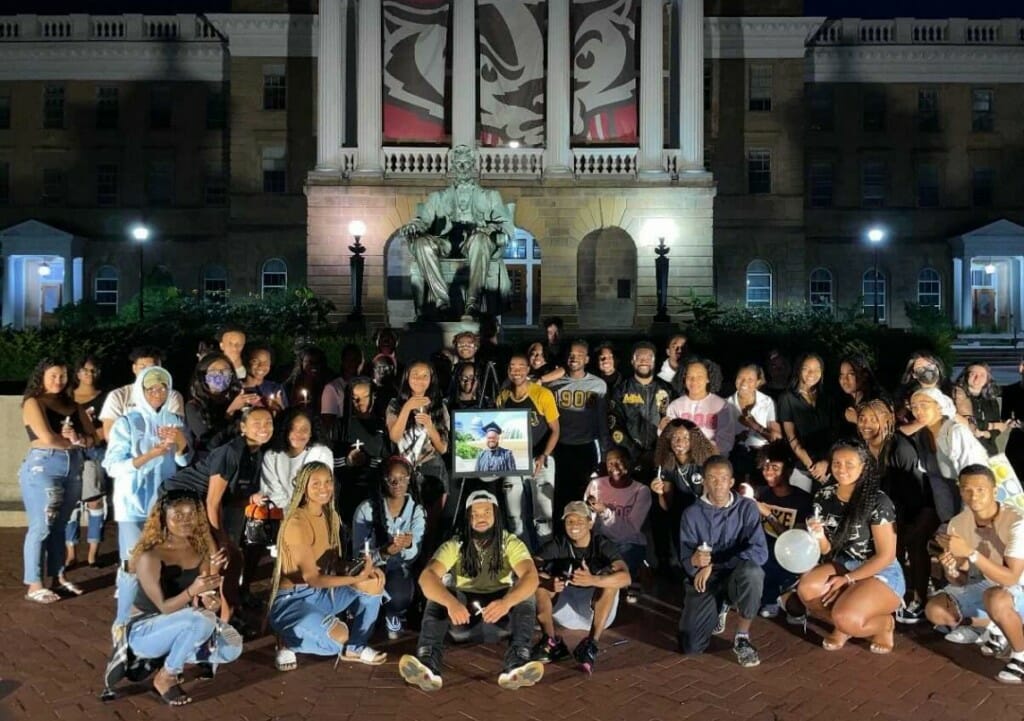 Darrell Foster was remembered by friends and colleagues at a candlelight vigil on Bascom Hill on July 11. Gamma Epsilon chapter of Alpha Phi Alpha

University of Wisconsin–Madison alumnus Darrell Foster is being remembered throughout the Madison and Washington D.C. areas as a scholar, a friend and an influential force on and off campus.

Foster, 22, passed away on July 2 during preparation for surgery. Friends and faculty describe Foster’s passing as a huge loss to the communities of scholars, students and alumni on campus, as well as his family and close friends. 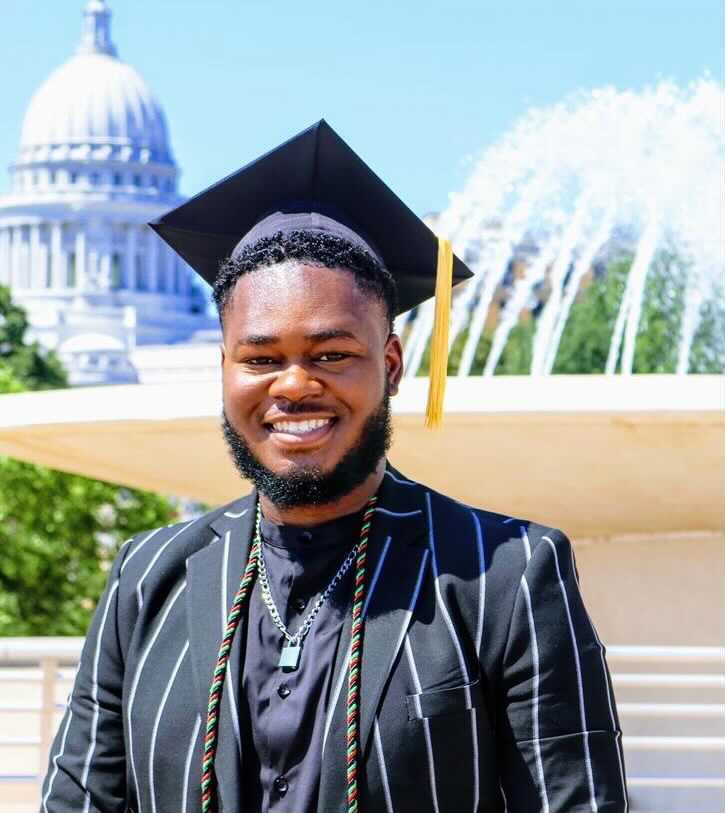 Foster graduated in May of 2020 as a Posse scholar with a degree in biology from the College of Agricultural & Life Sciences and a certificate in Studio Art. He also had a passion for cooking and took culinary classes in the summer. Since then, he had been working as a phlebotomist and volunteered teaching elderly members of the Black community about health and wellness in Washington, D.C. Foster had recently taken the MCAT and applied to medical school in hopes of becoming a plastic surgeon.

Vershawn Hansen, Foster’s close friend and fraternity brother, is mourning his loss with a heavy heart and will miss the shared memories of cooking and helping the community.

“That’s my brother for life and I miss him so, so much. I have never met anyone filled with so much joy, and I wish I could just call him to hear his laugh one more time.” Hansen said. “As sad as I am to accept that I have lost my best friend, I thank God for creating such a beautiful soul and allowing me to be a part of his journey. For that, I am eternally grateful.”

Emilie Hofacker, director of the Posse program at UW, said that the program will be holding a 20th year Posse celebration where a tribute will be held in Foster’s name.

“Having lost a Posse scholar has been devastating for our community because we are such a tight-knit family. Darrell was such a remarkable young man during and after his time at the University of Wisconsin–Madison,” Hofacker said. “There have been calls with current and past Posse members, staff, faculty, leadership, and his family. During these difficult times what has really been beautiful is the sharing of stories, his narrative, his impact, and allowing for laughter and tears during these conversations.”

As a member of the Gamma Epsilon Chapter of Alpha Phi Alpha fraternity, Foster showed outreach and dedication to community service that was admired by many people throughout campus.

Elias Sobah, his fraternity brother and friend, spoke to Darrell’s character and the impact of his loss. Sobah and many of Foster’s other close friends and family travelled to the D.C. area to be with him in his final moments.

“Losing Darrell has been one of the biggest challenges many of us have had to face thus far in our lives,” Sobah said. “He’s someone who left a clear impact on every space he’s entered. From the Posse program to our fraternity to the classes he had a chance to lead and beyond.”

Many of Foster’s close friends, brothers, and family gathered for a candlelight vigil on Bascom Hill on July 11 to honor and remember Fosters’ legacy.

Sobah will always remember Foster’s ability to create community, and the sense of belonging many people felt around Foster. Many of the people influenced by him have grown closer from the need to support one another in his passing. Sharing stories, laughter, and community has aided many of Foster’s loved ones in this difficult time.

“He was a natural-born leader that moved with love and compassion. Darrell was just an extremely fun and easy-going person to be around. I can say with confidence that regardless of who you were and how you knew him, Darrell will always hold a special place in our hearts.” Sobah said.

This fall, the Alpha Phi Alpha fraternity plans on dedicating the chapter’s 75th anniversary to him during homecoming weekend. Later in December, they will also name the Stroll Like An Alpha event and trophy after Foster, in addition to working with his family to create a scholarship fund in his name on campus.

A service and celebration of life honoring Foster’s legacy will be held later this month on Saturday, July 31 in his hometown of Washington D.C.