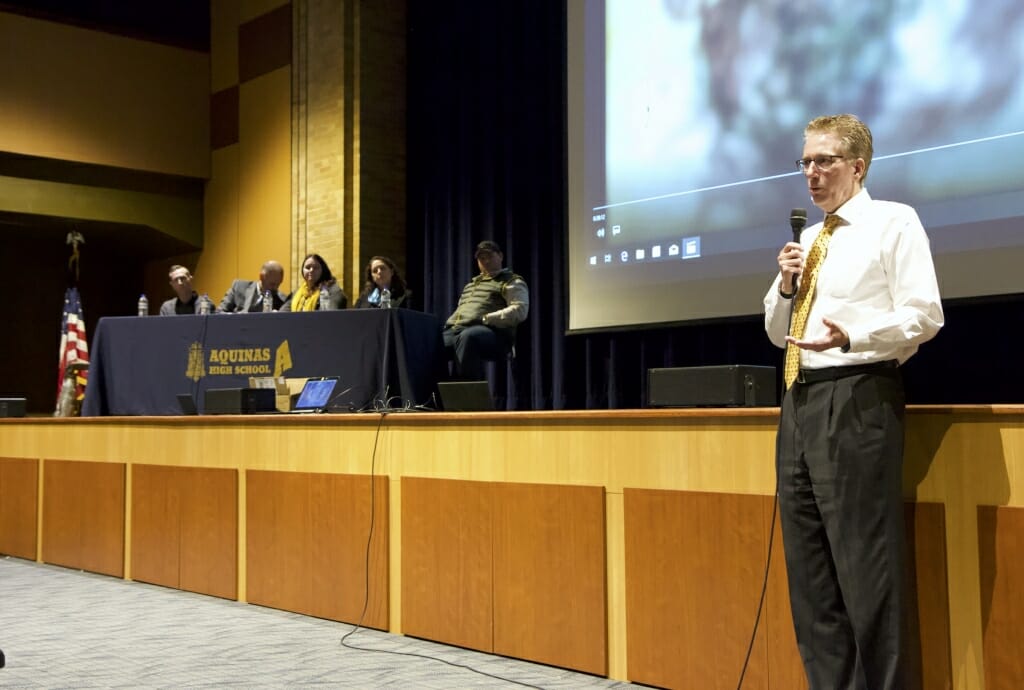 Jon Henkes, director of Wisconsin Eye, led a panel discussion after showing Straight Forward, a movie about addiction and recovery in Wisconsin, on Oct. 23 in La Crosse. Photo by David Tenenbaum

LA CROSSE, Wisconsin – A small audience of adults gathered at Aquinas High School Tuesday evening to watch a documentary about the Wisconsin opioid crisis. The film was followed by a panel that discussed the solutions to one of the most dangerous drug epidemics in American history.

After the 38-minute film, audience members inquired about how concerned they should be about marijuana use, in terms of progression to heroin use. What, they asked, was the state government doing to confront the epidemic of heroin, prescription pills and methamphetamine? Could quitting opioids while continuing to use marijuana legitimately be called recovery? Where could young people get in-patient treatment for addiction?

The film that sparked this discussion, Straight Forward: The Truth About Addiction, was produced by Wisconsin Eye, a statewide, non-profit version of C-Span. WisEye director Jon Henkes explained to the audience that, as concerns about opioids were rising two years ago, ‘We wondered what could we do locally to contribute to a solution.” A town-hall meeting moderated by former governor Tommy Thompson and former attorney general J.B. Van Hollen solicited ideas from 50 Wisconsinites with experience in law enforcement, the judiciary, treatment centers or first-hand, as addicts in recovery.

Wisconsin Eye opted for a documentary that would explore addiction from the viewpoint of addicts in recovery. In conversations with addiction counselors and high school students, Henkes says, “We learned that if it was going to be effective with middle- and high-school kids, we could not use scare tactics. It could not be adults telling young people what to be, how to live. It had to be real, raw, peer to peer.” 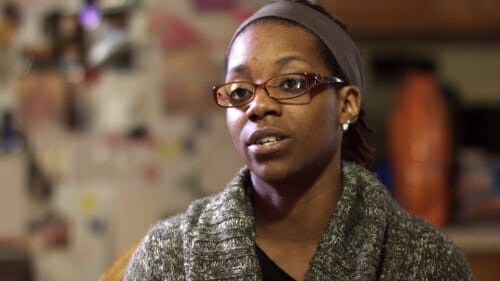 “In a very short time, it spiraled off into heroin addiction… this is for me when crimes started happening, and I lost my jobs,” said Kisha Shaw, who, like the other movie subjects, is in recovery from opioid addiction. Photo courtesy Wisconsin Eye

And that is how the film goes; with close-up interviews with five recovering addicts, describing their initiation, descent and recovery, with an emphasis on hitting “rock bottom.”  In one particularly chilling scene, a father describes how he barred the door to his relapsing daughter, then went upstairs and cried.

Perhaps more interesting than the parents in the audience was the reaction of the Aquinas kids, who had seen the movie two weeks previously. Aquinas principal Denise Ring was immediately struck by what she did not hear when the video finished. “There was an awkward silence, I think they were kind of processing the video.”

For that reason alone, she said, “I think the video was very effective.”

Students at Aquinas spent one class before and another afterward working with curriculum prepared by Wisconsin Eye and funded by the Wisconsin Partnership program at the University of Wisconsin School of Medicine and Public Health. The partnership funds projects dedicated to improving health in Wisconsin. The curriculum itself, available here, intends that student will:

“Having a documentary that uses the idea of peer-to-peer is huge,” said panel member Austin Rinehart, a recovering addict who has been clean and sober for six years. Reinhart is CEO of Driftless Recovery Services in La Crosse. 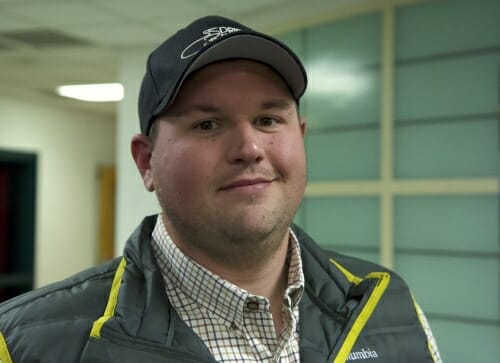 “Having an authority figure talk about not doing drugs has been tried for years, but it’s been relatively ineffective,” said Austin Reinhart of Driftless Recovery Services. Photo by David Tenenbaum

“Using individuals who fall in the same demographic as the audience to have an honest conversation about drugs, alcohol and recovery adds that personal experience that helps people identify with their own struggles.”

At the request of local schools, plans are underway to present the film in Stevens Point, Green Bay and Spring Green.

Ryan Schaller, school guidance counselor, attended those showings, and agreed that “The film opens a channel” to discuss a sensitive issue that needs airing. “When the video ended, during the discussion, the kids were playing complete attention to whoever was speaking. I was blown away by how many questions were asked, not just by adults, but by the students. We could have had another half hour of Q and A with the students.”

Also encouraging, Schaller said, was what he saw in the days following the showings (held separately for the 150-odd middle school students and about 300 high school students). 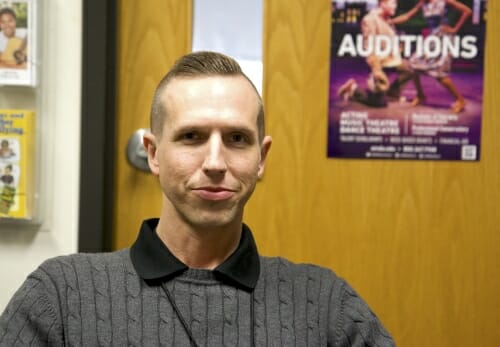 Two students, he says, came in privately to discuss concerns. One asked about a relative who had been taking prescription pain meds for a year, and wondered if it was common. “I said, ‘In some scenarios, yes, but not often,” Schaller said. When probed about the bigger picture, the student revealed that the relative was not showing up for events as much as in the past. “That may be a clue, and I praised the student for recognizing that,” Schaller says.

If there was a magic bullet to solve the opioid crisis, it would already have been discovered, but Schaller says Straight Forward is a step in the right direction.  “It took courage for those two students to come talk to me, and also for the kids who asked questions at the showings. We made them as comfortable as we could, but still they did not have to ask questions in public; they had no proof that we would not turn around and point fingers. They were brave, and now, they have evidence that it was OK to bring this up.” 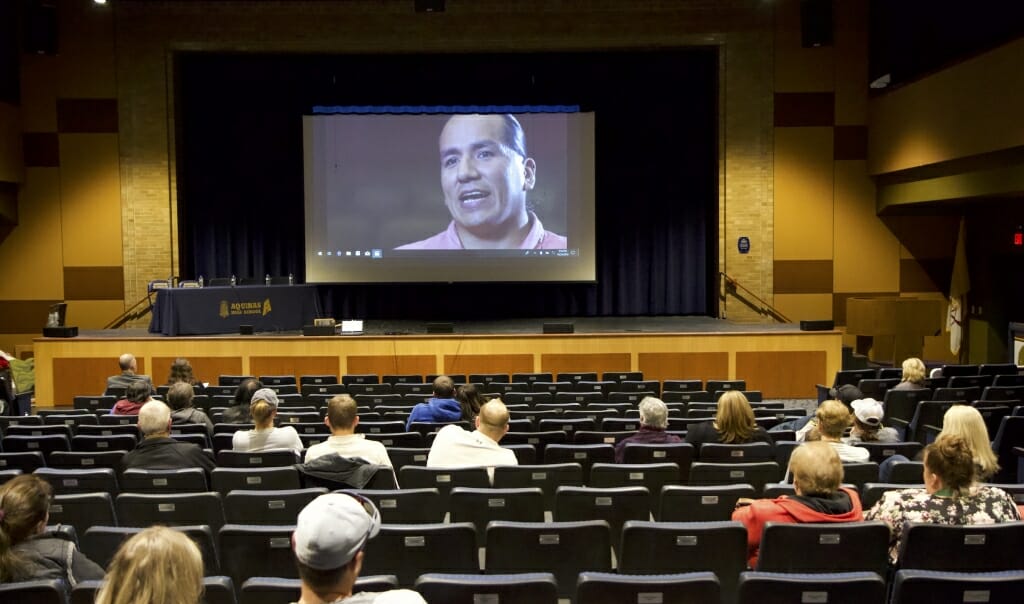 “There was a lot of chaos in my life, it was just constant chaos,” said Ira Franks in the movie. “I was expecting to get better and it wasn’t … the choices I was making.” Photo by David Tenenbaum

After seeing the video at least five times, Schaller says he can’t help noticing the youth who said, “‘Unfortunately, my family did not talk about things a lot.’ That sticks out to me.”

If there is no panacea on the horizon, one essential, all agreed, is communication, in the school, and particularly in the family, said Rita Von Haden, a prevention specialist at Coulee Recovery Center in La Crosse. “A big part is starting conversations with young people, letting them know they can talk, can go to mom or dad if something concerns them. As a parent, it’s never too late to show that you can be supportive, that you are not going to yell at them, they are not going to be grounded. ‘Let’s talk about it. Let’s see where we can go.’”