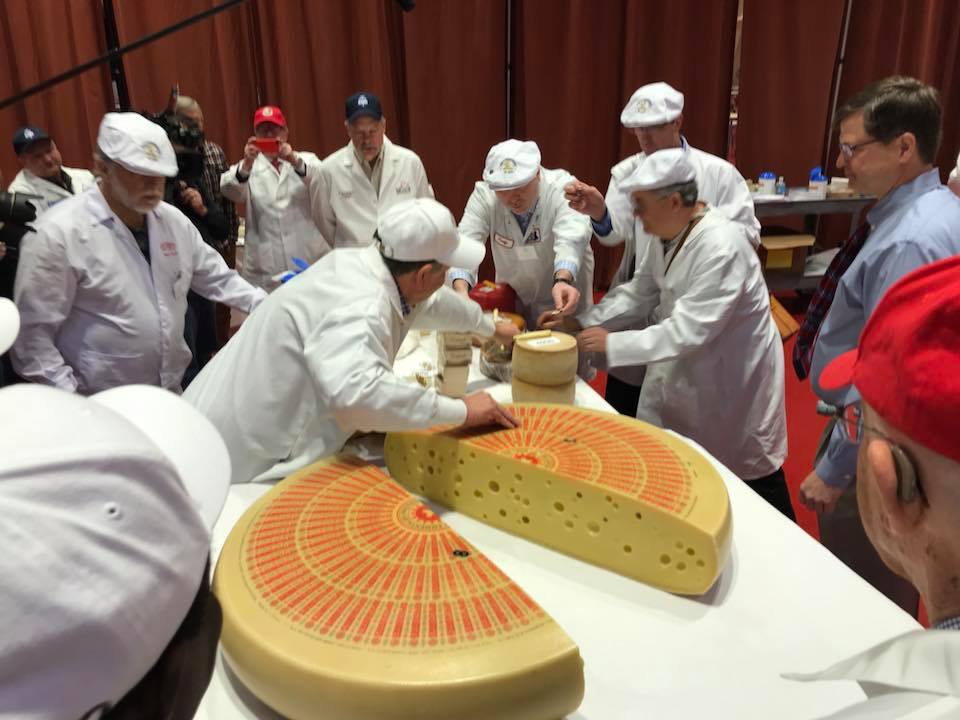 The event is the biennial World Championship Cheese Contest, which cycles between Madison and Green Bay. This year, 3,402 entries came from 27 nations and 32 states to the event that runs March 6-8.

UW–Madison alumnus Mike Matucheski and his team from Plymouth-based Sartori Company were finalists in the championship. Two Sartori cheeses — Pastorale Blend and Reserve Espresso — made the top 20. A sheep’s milk hard cheese from France was named best in show. This year, 3,402 entries came from 27 nations and 32 states. At last year’s championships, Matucheski’s Sartori Reserve Black Pepper BellaVitano was named the nation’s top cheese.

Judging at the contest, sponsored by the Wisconsin Cheesemakers Association, is divided into 104 cheeses, such as “natural rinded cheddar,” “parmesan,” “blue-veined cheeses,” and 17 butters and yogurts. 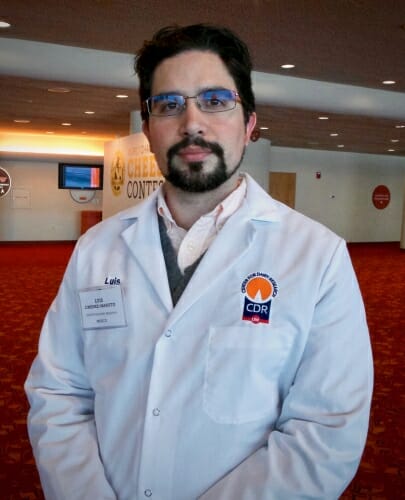 Luis Alejandro Jiménez-Maroto, a graduate student in food science at the University of Wisconsin–Madison, was one of six judges from UW’s Center for Dairy Research at the ongoing World Cheese Championship in Madison. His Ph.D. project concerns the effect of high pressure and low temperature on cheese texture and flavors during extended storage. Photo by David Tenenbaum

A judge’s job covers much more than just taste, says Jiménez-Maroto, who led the “sensory evaluation” systems at the Center for Dairy Research at University of Wisconsin–Madison for several years before enrolling in a Ph.D. program in Food Science in 2015. “It’s called a ‘sensory’ evaluation because we deal with smell, of course, but also texture and appearance.”

Jiménez-Maroto was joined by six other judges from the Center for Dairy Research, a world headquarters for the science and technology of dairy products. Overall, there were 53 judges.

“When we judge, we look for the ideal cheese of that class,” says Jiménez-Maroto, a native of Mexico City who has studied and worked in food science and technology in Mexico and Wisconsin, “so we deduct for things that are not ideal. Queso blanco [a common Latin-American cheese], for example, is supposed to be fresh, so it should taste like milk, very clean, not bitter, maybe a hint acidic, depending on cheesemaking technique used. The two-year-plus cheddar class is tougher, because as cheese ages, its flavor becomes more intense, and so a five-year cheddar will have a different ideal profile than a two-year cheddar, even though they are in the same class.”

Each class is evaluated by two judges, who remain silent as they deliberate. The winning cheeses will be announced Thursday evening at a reception at Monona Terrace.

Wisconsin and UW–Madison are a natural destination for anybody interested in dairy, says Jiménez-Maroto. “The major reason I came to Wisconsin is because Wisconsin has everything related to dairy in a single place: milk production, cheese makers, cheese processers, and a university that does top-flight research to enhance innovation and progress in the dairy industry.”

“It’s very appropriate that the world cheese championships are held here in Wisconsin,” says John Lucey, director of the Center for Dairy Research. “This state has the heritage, the farms, the climate and landscape, and a level of expertise and innovation in cheese that is unmatched in the world.  Whether it’s specialty and artisanal cheeses to our traditional varieties like brick, Colby, cheddar and mozzarella, Wisconsin has always been a place that takes cheese very seriously. You can see that from the record of past championships, where the majority of U.S. winners were graduates of short courses at the Center.” Short courses range from two days to a week-long session devoted to all aspects of cheese science and technology, and attendees come from all over the U.S. and as well as from some international companies. “Looking at the results so far, the same is true of this year’s winners. There is really no other place in the United States, maybe the world, with this intensity of knowledge, passion and experience in cheese and dairy science.”

The Center for Dairy Research (CDR) is located within a licensed, operating dairy plant on the University of Wisconsin–Madison campus. CDR has more than 30 researchers and scientists working on basic and applied dairy research, exploring the functional, flavor and physical properties of cheese and cheese products and other milk components, whether used as ingredients or as finished products. CDR researchers assist the dairy industry in developing and testing dairy products that exceed consumer expectations with a safe, wholesome product.

Matucheski, an Antigo native was a UW–Madison history major with an interest in journalism and archaeology. Then he discovered his real passion while building a career as an artisanal cheesemaker at Sartori Company.

“For me, it was never about just getting a job,” says Matucheski. “My upbringing, my experience at UW–Madison taught me that you can’t let luck rule your world. Luck doesn’t get you where you need to be. Creativity does. Passion does. Opportunity does.”

“I value my history background,” adds Matucheski, who — in addition to his 1981 bachelor’s degree — later earned his master cheesemaker certification at UW–Madison. “I find it’s really important to know where you’ve been. Otherwise, you get lost.”