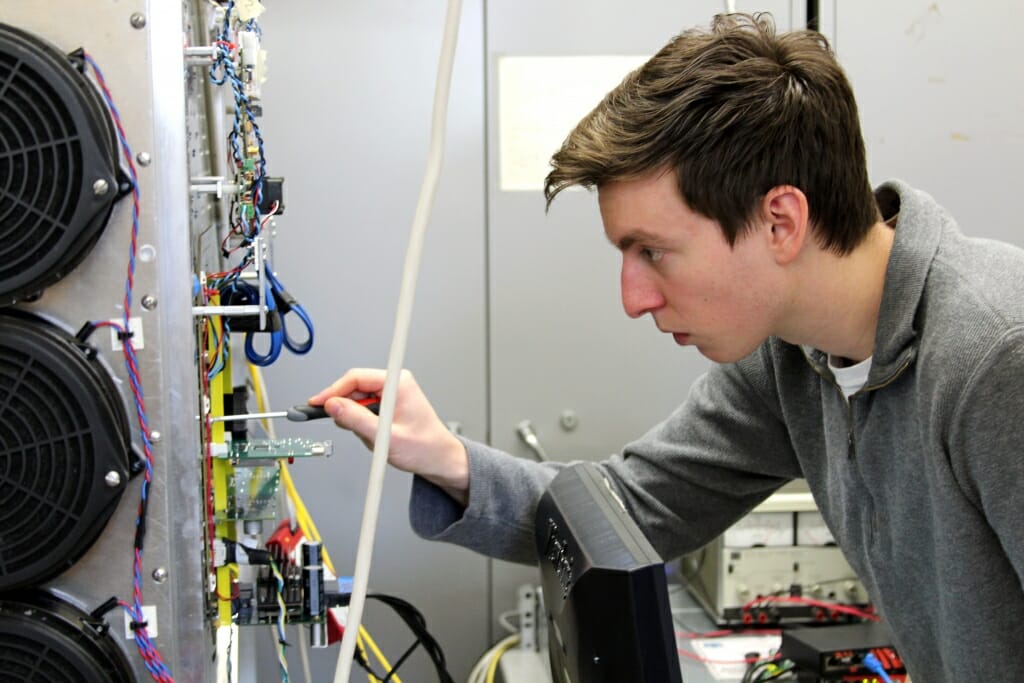 Colin Adams, a UW–Madison physics undergraduate, makes an adjustment to a novel prototype camera that will be used to image the fleeting signatures of gamma rays crashing into molecules of air in the Earth’s atmosphere, creating a shower of diagnostic secondary particles. Credit: Savannah Guthrie

A unique high-speed camera, designed to capture the fleeting effects of gamma rays crashing into the Earth’s atmosphere, will soon be on its way from the University of Wisconsin–Madison to Arizona’s Mount Hopkins.

There, the prototype camera will be integrated into a new telescope that will demonstrate novel technologies for the Cherenkov Telescope Array (CTA), a wide-ranging international effort to construct the world’s most advanced and comprehensive ground-based gamma-ray detector.

“This telescope pushes the technology to a very different regime,” explains Vladimir Vassiliev, a professor of physics and astronomy at the University of California Los Angeles and the lead scientist for the telescope under construction on Mount Hopkins in southern Arizona. The telescope, he notes, will have unparalleled mirror optics and the camera is designed to capture the fleeting pulses of blue Cherenkov light created when gamma rays crash into molecules of air in Earth’s atmosphere, creating a shower of diagnostic secondary particles. 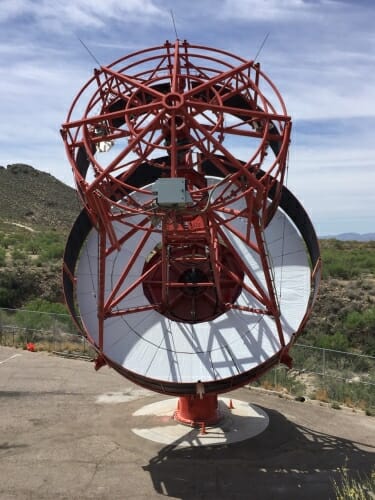 A novel gamma ray telescope under construction on Mount Hopkins, Arizona. The telescope is part of a large project known as the Cherenkov Telescope Array, which will be composed of hundreds of similar telescopes to be situated in the Canary Islands and Chile. The telescope on Mount Hopkins will be fitted with a prototype high-speed camera, assembled at the University of Wisconsin–Madison, and capable of taking pictures at a billion frames per second. Credit: Vladimir Vassiliev

“We’ll be able to make a movie at a billion frames per second of the particle shower developing in the atmosphere,” says Justin Vandenbroucke, the UW–Madison physics professor co-leading development of the prototype camera under the auspices of the Wisconsin IceCube Particle Astrophysics Center (WIPAC) with support from the National Science Foundation (NSF).

American participation in CTA is supported by NSF, but the overarching project is a huge international undertaking and, when completed, will be comprised of more than 100 telescopes sited in the Canary Islands and Chile. It will be the largest ground-based gamma-ray detection observatory in the world. More than 1,400 scientists from 32 countries are involved in the undertaking. The camera and telescope are being funded primarily by NSF, with contributions from participating universities.

With its innovative optics and camera, the new telescope will be operated in concert with an existing array of four single-mirror telescopes that comprise VERITAS (Very Energetic Radiation Imaging Telescope Array System), located at the Fred Lawrence Whipple Observatory on Mount Hopkins.

Camera technology is critical, says Vandenbroucke, who has been working on the design and construction of the 800-pound, golf-cart sized prototype instrument since 2009 when he was a post-doctoral fellow at Stanford University.

The camera has finally come together in a basement laboratory in UW–Madison’s Chamberlin Hall, where Vandenbroucke’s group has been busy integrating and testing it. Camera components will be shipped May 7 to Arizona, where the camera will be reassembled, tested and integrated into the new telescope, which is now being fitted with its mirrors. 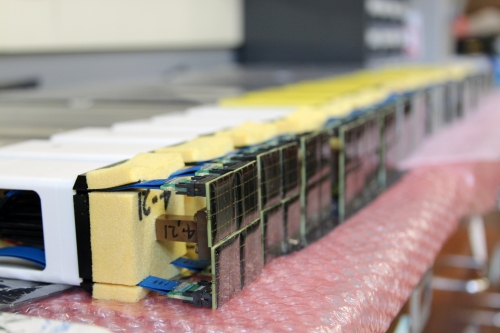 Sensors and electronic modules that are the heart of a prototype camera being integrated by UW–Madison physicists in support of the Cherenkov Telescope Array. The project is being facilitated by the Wisconsin IceCube Particle Astrophysics Center. Credit: Savannah Guthrie

The challenge for the camera, according to Vandenbroucke, is that the flashes of photons or particles of light that are of interest are incredibly fast. The Cherenkov pulse in an air shower may last only six nanoseconds, yet each pulse enables detection of a gamma-ray a trillion times more energetic than can be seen with the human eye. The pulses occur at random, making telescopes and cameras with wide fields of view essential, says Vassiliev.

The gamma rays of interest to the CTA team span a wide range of energies. The telescope being built by Vassiliev’s team is designed to detect gamma rays in the central energy range. Objects powered by black holes, says Vandenbroucke, are among the likeliest sources of the gamma rays that will be parsed by the new CTA telescope.

Opening a new frontier in the detection and measurement of gamma rays, says Vandenbroucke, will help answer a raft of some of the most fundamental questions about the nature of matter and energy in the universe. “Gamma rays are the linchpin of multi-messenger astronomy,” says the Wisconsin scientist. “They have been essential to identifying the first gravitational wave signal from merging neutron stars and may play a similar role in the search for the sources of high-energy neutrinos.”