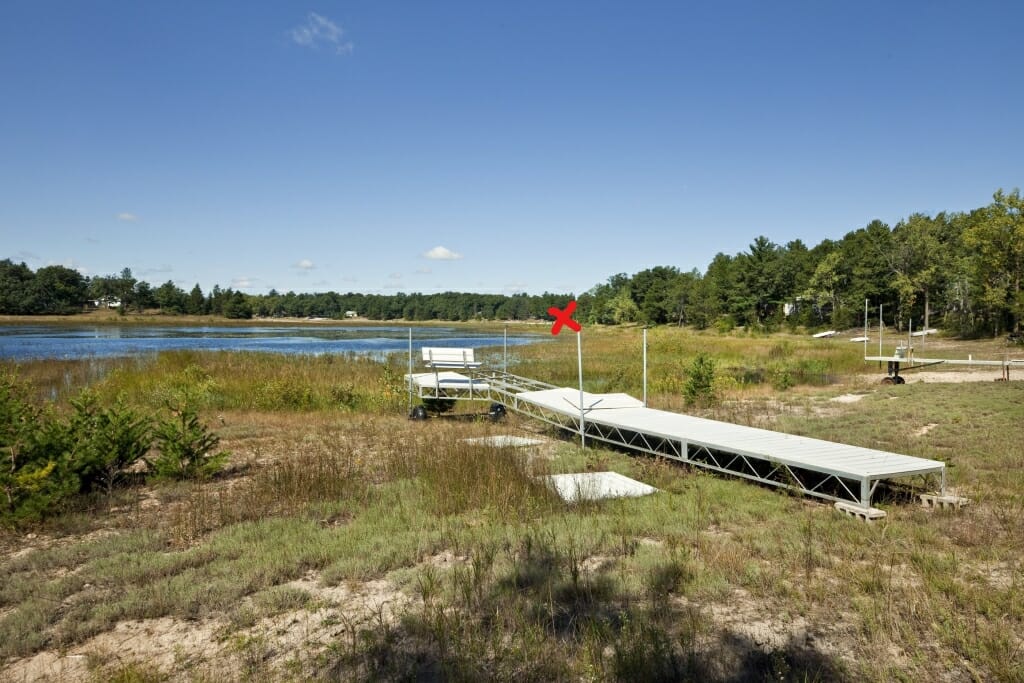 When groundwater fell in Waushara County, Wisconsin, residents worried that Long Lake (seen in a 2011 photo) was a “dying lake.” Slide right to see photo was taken in 2019 at the spot marked with red “X.” Photo by Wolfgang Hoffman, CALS, UW–Madison 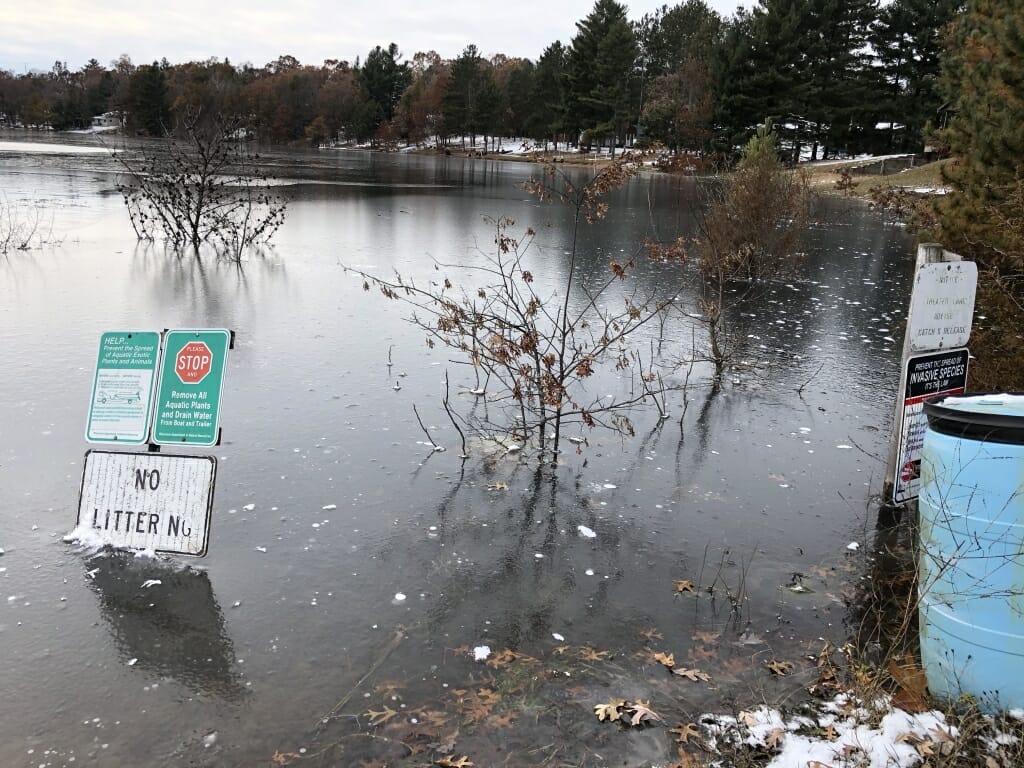 By 2019, groundwater-dependent Long Lake had risen 9 feet from its recent low in 2006, due to years of above-average rain. Instead of worrying that their lake was dying, Waushara County residents began to talk about wet basements and shoreline erosion. Photo by Robert Smail, DNR

After analyzing decades of data on groundwater and precipitation, scientists at University of Wisconsin–Madison and the Wisconsin Department of Natural Resources have linked precipitation trends to groundwater levels in monitoring wells in Wisconsin.

The traditional starting point for understanding water level variation requires knowledge of factors such as aquifer properties, land use, and the amount of water pumped out. However, in the Journal of Hydrology on Nov. 15, 2019, Robert Smail, a recent UW–Madison Ph.D., revealed a method to connect precipitation records and changes in the groundwater level that focused solely on two numbers:

The new analysis is all about context, Smail says.  “If we are interested in how groundwater levels respond to rainfall,” he says, “we don’t care what the average monthly rainfall has been in Wisconsin over the past 100 years. Instead, we found that it’s best to compare last month to the average over the previous five years.”

The study looked at long-term data on groundwater levels for 90 Wisconsin wells, taken from the U.S. Geologic Survey and the Wisconsin Geologic and Natural History Survey. Weather history came from the National Weather Service.

Using the new system, 54 percent of the wells had moderate to high correlation with precipitation and groundwater level, says Smail, a significant improvement over previous efforts.

The need to understand how weather affects groundwater in Wisconsin is underscored by record summer deluges and groundwater high enough to harm farms, homes and roads. In many parts of the state, groundwater is at record levels; evident in fields that remain flooded month after month. This stands in dramatic contrast to widespread concerns seven to 10 years ago about low water and “dying lakes.”

Although rainfall and snow obviously contribute most or all water to an aquifer, “efforts to make this linkage have been problematic,” says Smail. “Rainfall is variable; it can be wet one year and dry the next, so rainfall numbers do not directly tell us what we need to know. But the water levels in aquifers levels have a memory. We just needed to figure out long that memory is.”

“The new part here is the ability to use precipitation as a proxy – as a stand-in — instead of going out and measuring groundwater level,” says study co-author Jed Colquhoun, a professor of horticulture, who focuses on fruit and vegetable production systems that often rely on irrigation. “Precipitation records are more readily available over broader regions than groundwater records, and precipitation data can fill gaps at very low cost.”

The new approach also got negative confirmation. The wells showing the relationship were fairly shallow, with good connections to the surface. In southeast Wisconsin, where a layer of shale separates the upper and lower aquifers, the algorithm does not work, Smail says. “That helps confirm that the model predicts what we hoped to predict.”

Perhaps the most curious aspect of the study was what the model did not explain. The material in the aquifer –  whether porous sand and gravel or more resistant deep sandstone — did not affect the discovered relationship. “It’s counter-intuitive and something future research could help us better understand,” says Smail, who also works in the Bureau of Drinking Water and Groundwater at the Wisconsin Department of Natural Resources.

However, the curiosity carries a benefit, since it’s apparently not necessary to know much about an aquifer in order to see how precipitation is affecting water levels. Changes in land cover and regional water extraction are difficult to predict and document, so having an algorithm that looks only at the commonly tracked precipitation levels can be a big advantage, says Smail.

In their study, Smail and colleagues wrote that the new method “allows engineers, groundwater professionals and resource managers to easily access datasets to generate and test hypotheses about sites without prior knowledge of the geology or aquifer properties, extraction rates, and land cover.”

“The five-year moving average relationship might produce a management tool that could tell us whether the risk of affecting groundwater through withdrawals is high or low based on the last five years of precipitation,” Colquhoun says. ‘We could manage groundwater at the landscape level.”

The record rainfalls of the past few years are a standard prediction of global warming models, Smail notes, but swings will always occur from year to year. “People ask, is the new normal? But in the study, we show that normal is always moving. There are high periods, and low periods. We need to take this into account to understand groundwater levels.”