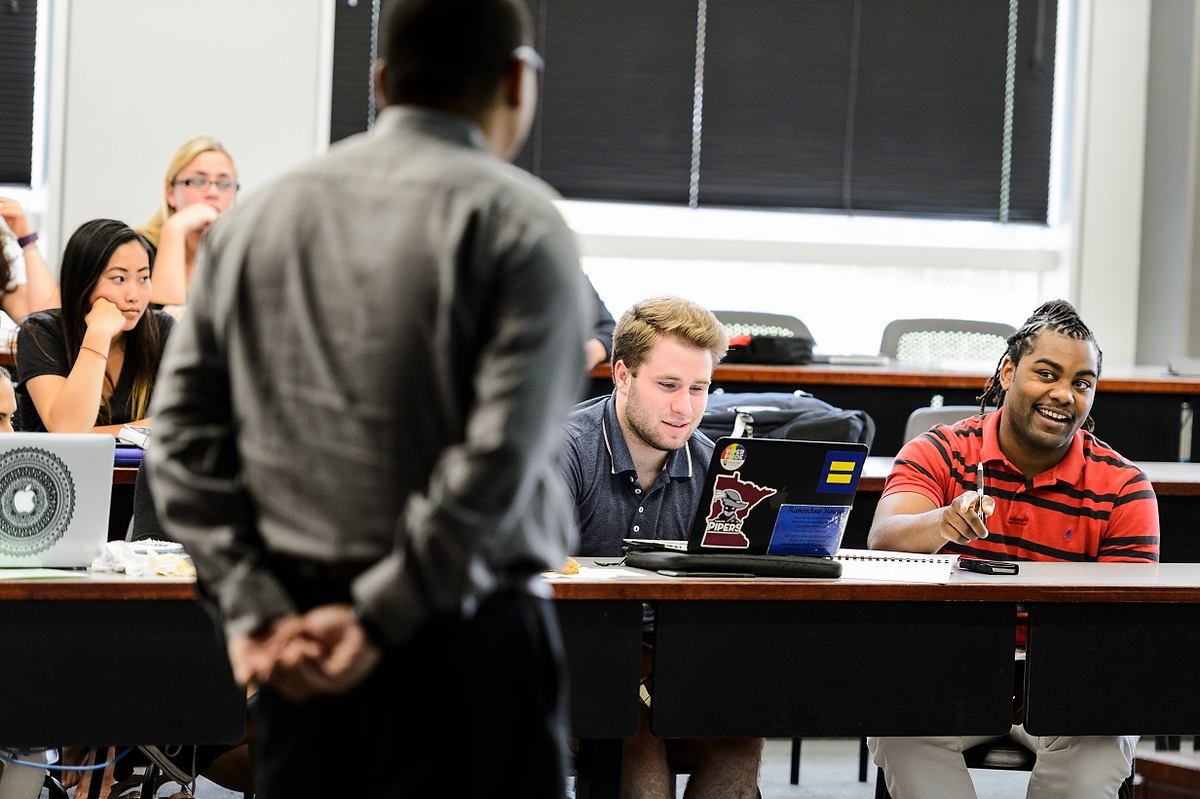 In 1971, Geraldine Hines was one of four black students entering the Wisconsin Law School. She’s now a justice on the Massachusetts Supreme Judicial Court – the first African-American woman to serve there – and recently, she returned to meet with 18 students, speaking about the challenges and opportunities studying law provides.

The students Hines spoke with were part of a new program at the law school: the James E. Jones Jr. Pre-Law Scholars Program, a Legal Education Diversity Pipeline Grant Program funded by the Access Group Center for Research & Policy Analysis. It’s open to students who have completed their freshman or sophomore years in college. The aim: help them explore legal education and careers in law and succeed in applying to, enrolling in, and graduating from law school. 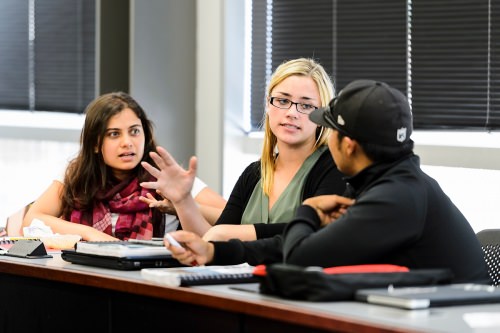 Aleks Talsky, seated at center and an undergraduate from UW-Milwaukee, makes a point as students discuss election law in a class taught by Steven Wright, a clinical instructor with the Wisconsin Innocence Project, during a closing session of the inaugural James E. Jones Jr. Pre-Law Scholars Program at the Law Building at UW–Madison on June 29. Photo: Jeff Miller

The program is named for the late Professor James E. Jones Jr., a pioneer in equal employment and affirmative action policy. He taught labor law and arbitration for nearly 30 years at the Law School.

The program focuses on attracting promising students from groups historically underrepresented in the legal profession, from socioeconomically disadvantaged backgrounds, or who face other significant barriers to entering the legal profession. Participating students came from throughout the University of Wisconsin system as well as out of state.

Aleks Talsky, 19, will be a sophomore at the University of Wisconsin-Milwaukee.  She’s from Mukwonago, Wisconsin, and is majoring in  political science with minors in global studies and Spanish. She has long had an interest in law but wasn’t sure about attending law school.

“You want to know what it will be like before you go,” Talsky said. “The law students here help give you a good idea what it’s going to be like.”

The program emphasizes the experience of law school and studying law. On the very first day, students learned they would be taking a practice Law School Admission Test (LSAT).

“That was kind of scary,” said Negassi Tesfamichael, a 20-year-old student at UW–Madison studying political science and English. “They threw us in the deep end, but they’re still there to help.”

The students took introductory law courses, taught by UW Law School professors, to see what studying law is like and whether it’s right for them.  They also participated in personal and professional development workshops and gained hands-on experience with the legal system, participating in activities such as a mock client intake, a Wisconsin prison tour, and attending a criminal plea and sentencing.

“Our goal was to provide an immersive law school experience while introducing students to the practice of law in its many forms,” said Rebecca Scheller, program coordinator and a 2007 UW Law grad who serves as assistant dean for admissions and financial aid. “We also wanted students to develop confidence in their ability to succeed throughout the application process, law school and beyond.” 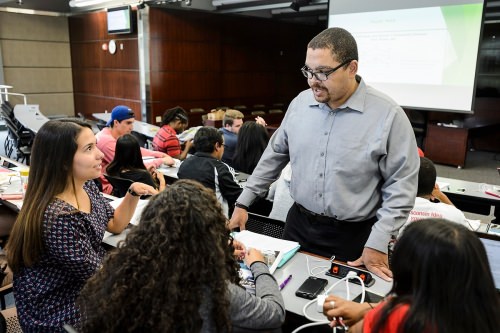 The students weren’t the only ones who valued the experience.

“Working with the students was incredibly invigorating, and brought back into focus what we do here at the law school,” Scheller said. “Their energy, enthusiasm and exchange of ideas added to our tradition of diversity that has strengthened the law school and university for decades.”

Besides law, students talked with each other about common challenges, such as time management. Pat Swiney, 22, has an associate degree from Madison Area Technical College and will attend UW–Madison this fall. He has an infant daughter so learning how to juggle multiple responsibilities is especially important.

While summer is often thought of as a time for a break from class, these students were glad for the opportunity to learn.

“This has been an amazingly transformative experience,” Swiney said. “I feel like this has been the challenge I needed. It’s been a blessing to be part of this.”

At the closing ceremony of the program, Hines encouraged students to be engaged in the community and stay the course.

“What we all started has not yet been finished,” she said. “We are in desperate need of fresh troops. You are those troops.”

The  James E. Jones Pre-Law Scholars Program will be offered again next summer with applications available in early 2017 at law.wisc.edu/prelaw. For more information, contact admissions@law.wisc.edu or 608-262-5914.  Starting next year, funding will come from the Law School Admission Council (LSAC), which will provide funding for three years (2017-2019).