Quick: How do you say “firewall” or “database” in the variant of French spoken in Belgium? For employees of Epic, the Wisconsin health-care software giant that is building out its European beachhead, it’s necessary lingo.

These were some of the terms that surfaced at the French House on the UW–Madison campus this summer, as four Epic employees took a one-week course in the University’s Division of Continuing Studies. 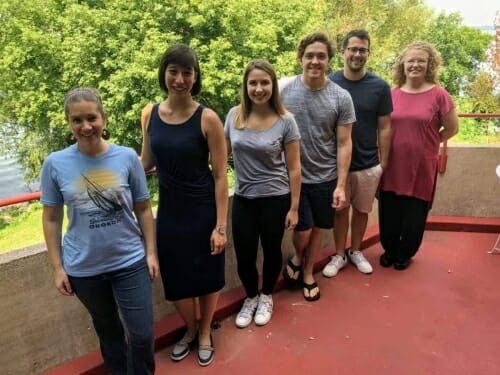 Employees from Epic Systems, Inc., attended a French-for-tech-workers class at UW–Madison before starting to work on a hospital-system modernization in Brussels. UW-Madison

“We are working with a hospital in Brussels to consolidate their 400 software systems into one Epic system,” says Epic’s Jaclyn Wegener. “I hadn’t really used my French from college in two years and our company wanted us to get a refresher on the French language. It was helpful to learn a lot of the specialty-specific jargon. Counting is also different in Belgium … seventy is ‘septante’ in Belgian, ‘soixante-dix’ in France.”

“I’ve taught several business French classes, but this was a really specialized, boutique course, with technology and medical vocabulary,” says Sage Goellner, an associate professor of French. “We had to bone up on terms like ‘project management’ and ‘heath data.’ I did find that the stereotypes about Epic employees are true: they are bright, hard-working and fascinating individuals.”

The Division of Continuing Studies holds about 500 professional development and enrichment courses, with 12,000 enrollments per year, in areas such as arts, humanities, language and business. The division also created about 30 customized courses last year, covering a disparate range of topics from dealing with dementia for nursing-home staff to distance learning and writing in the workplace.

Among the many classes devoted to management, we noticed “Leadership Lessons from Ernest Shackleton for aspiring leaders at American Family Insurance.” Shackleton was a British explorer who set out to cross Antarctica in 1914. After his ship was trapped and destroyed in the ice, the team endured a monumental, 20-month journey across the ice, bringing all 28 men to safety. 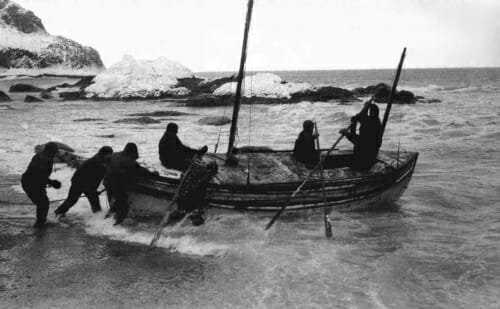 April 24, 1916: Shackleton’s crew launch their lifeboat from Elephant Island, on the Antarctic Peninsula, starting an 800-mile journey across the wildest ocean in the world. Destination: a whaling station on tiny South Georgia Island – and rescue.
Probably by Frank Hurley. Public domain

Shackleton’s noteworthy leadership was the key to survival, says Laura V. Page, director of programs in leadership and management. Once the ship was being crushed by the ice, for example, Shackleton made a habit of sharing a tent with the most difficult crew members, so that their fear and negativity could be contained and even turned around.

Shackleton believed leadership could be learned, Page says. “He was not born a great leader, he became one intentionally. In the merchant marine, he watched the bad leaders and learned from that.

“He admitted his mistakes; was not always right; would consult with his men, listen and then decide. He genuinely cared for his men and showed it.  His powerful leadership made the men more likely to do the right thing when nobody was looking.” When one man spilled his warm milk – a real scarcity with starvation looming, “the other guys almost instantly poured a little into his cup, and that’s because Shackleton would have done that.”

Continuing studies currently works in three areas: arts and humanities, behavior and health, and leadership management and workforce development, says Andrea Deau, assistant dean of non-credit programming. Intensified coverage of technology is on the roadmap, she adds. “We are working to set up new programs focused not only on technology, but also other in-demand workforce skills.”

The goal, Deau says, is to “work more closely with campus and industry partners, leveraging our strengths as a university to develop high-quality, market-aligned programs. We have faculty, researchers, alumni, and staff innovating, creating new knowledge and leading practices in the community.  Let’s capitalize on that expertise, extend it through our Wisconsin Idea mission while serving the needs of our constituents locally, regionally and globally.”