The La Follette Policy Poll, released by UW–Madison’s La Follette School of Public Affairs, finds residents divided along party lines on issues like climate change and government regulation but generally in agreement on others, such as concerns about healthcare and retirement savings. 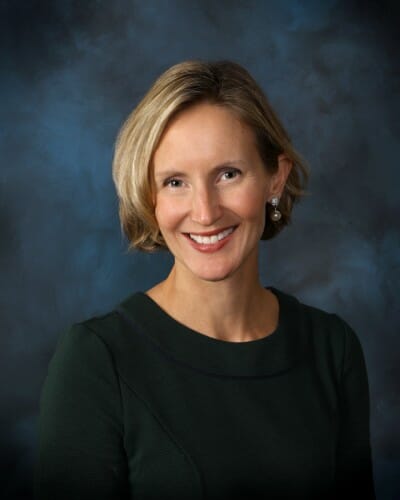 According to Professor Susan Webb Yackee, the school’s director, the poll “is not a political survey, but instead an investigation of public perceptions about policy issues in the state and national arena.”

With Wisconsin poised to be a battleground state in the 2022 elections, residents’ opinions on vital policy issues could have national implications.

The polling questions covered a range of topics, including:

Nearly 1,600 residents answered the eight-page survey, distributed by mail to 5,000 randomly selected  households, for a 33% response rate. The margin of error for the full sample is +/- 2.5% (at 95% confidence). The complete set of poll questions and results is available for download. Details on the poll’s methodology are available here. The La Follette Policy Poll website includes links to interactive analyses of the poll data created in Tableau Public, a free online data visualization website.

”By working with the UW Survey Center, we created an authoritative poll, with responses from every corner of the state, including 71 of Wisconsin’s 72 counties. We made sure that we gathered opinions from across the entire state, including in rural Wisconsin,” says Yackee.

The poll was in the field from July 14 to September 24, 2021. Because it is representative of the state as a whole, and because it focuses on persistent Wisconsin attitudes rather than attempting to capture a political snapshot, the results provide a revealing portrait of public opinion in a state that could affect the national balance of power this November.

What do Wisconsinites worry about most?

Respondents answered questions about a variety of policy issues, ranking each as: not a problem, a small problem, somewhat of a problem, quite a problem, or an extremely big problem. This allowed the poll to zero in on exactly what’s keeping Wisconsin residents up at night.

On every issue, residents are more concerned about what is happening in the nation than the situation in Wisconsin. For example, 39% of respondents thought climate change was an extremely big problem nationally, but only 27% felt the same about climate change in the state. Likewise, 35% of respondents ranked race relations as an extremely big problem nationally, while only 24% thought that was true in Wisconsin.

An interactive analysis of the problem assessment data is available on Tableau here.

Yackee explains, “Wisconsin elections are becoming increasingly nationalized—they affect outcomes in the country at large. The La Follette Policy Poll points to some reasons why that is true. Wisconsinites—and I mean all Wisconsinites, Democrats, Republicans and Independents—view public policy issues as more problematic in the U.S. overall than in our state.  This suggests that a national lens on public policy issues like healthcare, climate change, the budget deficit and government regulation might get folks more engaged and make them more likely to vote.” 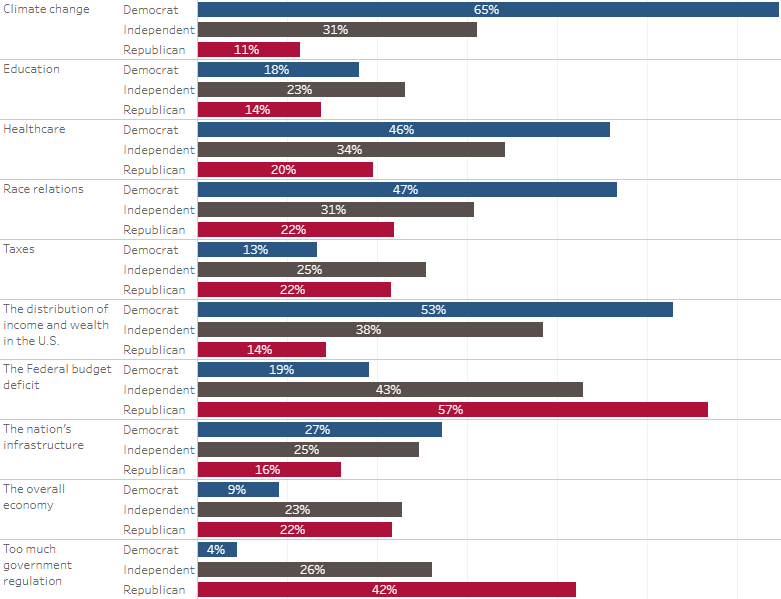 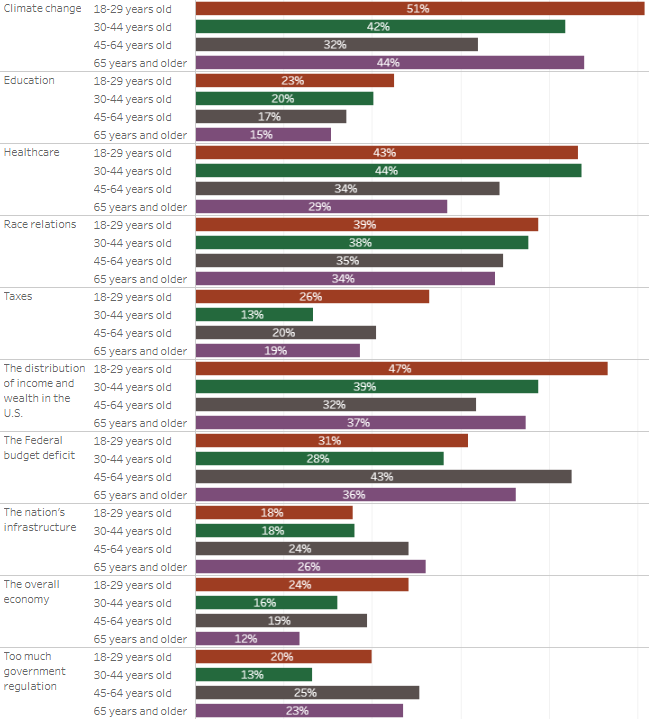 The widest differences in opinions on climate change, healthcare, race issues and income and wealth distribution are apparent when the poll responses are broken down by gender. Respondents identifying as female are more likely to call climate change, healthcare, race relations and income and wealth distribution extremely big national problems than males 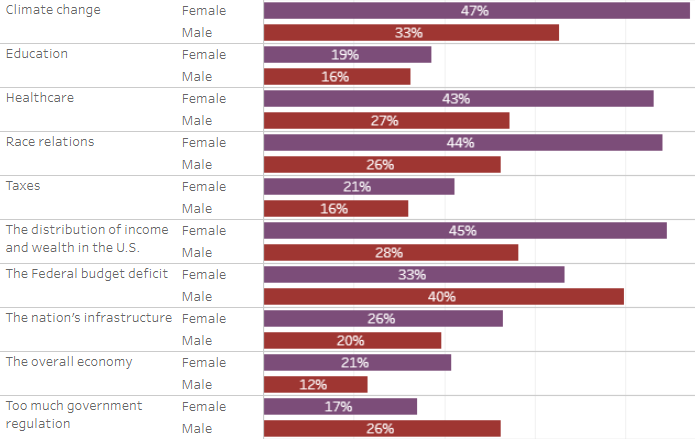 How much confidence do Wisconsinites have in federal, state and local government?

“The poll results regarding confidence in government echoed the responses on policy issues, in that Wisconsinites expressed greater concerns at the national level,” says Yackee. 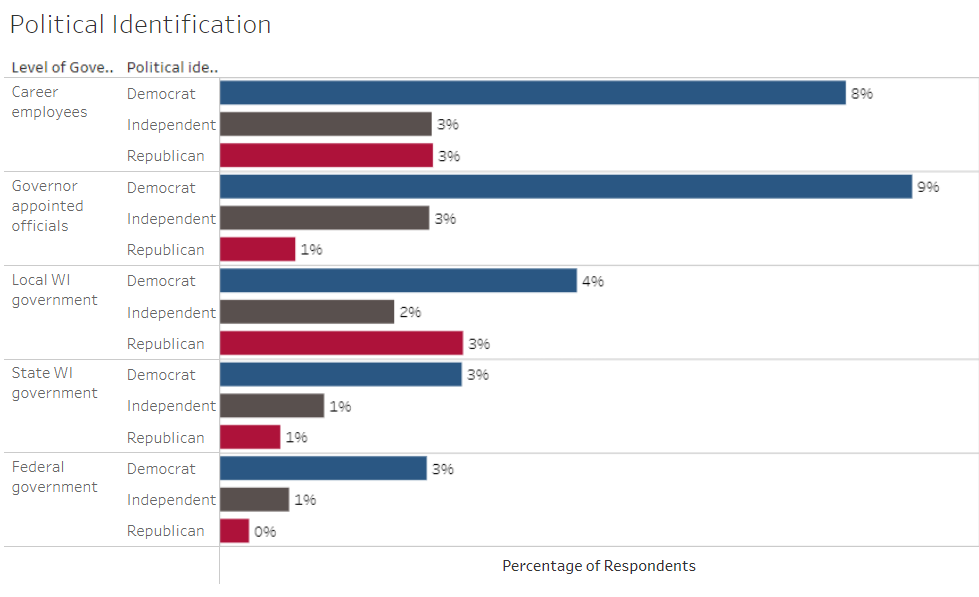 An interactive analysis of the confidence in government data is available in Tableau here.

What do Wisconsinites think about climate change?

The poll results show that climate change ranks as a top issue for Wisconsin residents, with 59% of all respondents ranking it as quite a problem or an extremely big problem. While more Democrats rank climate change highly than Republicans do, there’s widespread support across the political spectrum for solutions to climate change. These include helping to pay for new technologies that directly remove carbon dioxide from the atmosphere and taxing industries to remove industrial pollution.

La Follette School Professor Gregory Nemet says, “These poll results are insightful because they indicate that there is more bipartisan agreement on the need to do something on climate than political rhetoric would suggest.”

Assistant Professor Morgan Edwards, also of the La Follette School, explains, “More Wisconsinites support than oppose almost every climate change policy we polled (with the exception of building new nuclear power plants), from including the cost of carbon when approving new energy infrastructure to helping pay for new technologies to remove carbon dioxide from the atmosphere. Policies to invest in renewable energy and reduce pollution are particularly popular. Seventy percent of Wisconsinites support doubling the amount of electricity coming from renewables, and 76% support taxing industries to remove industrial pollution. These policies create benefits beyond climate change, including creating renewable-energy jobs and reducing emissions of air pollutants that harm human health.”

An interactive analysis of the climate change poll results is available on Tableau here.

How concerned are Wisconsinites about racial issues? 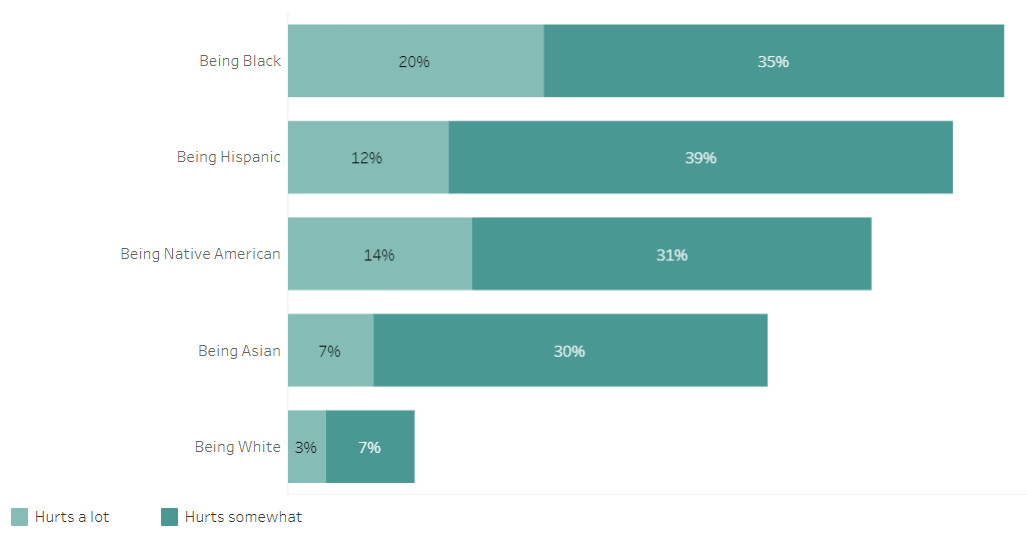 The race issues poll results are available on Tableau here.

Are Wisconsinites worried about their family finances?

Worrying about paying bills is another source of stress for families. Only 12% of Wisconsin respondents say they are very or extremely concerned about being able to pay their bills this year. The percentage of people who worry about paying bills is more than two times higher (26%) for those with income under $40,000.

According to La Follette School Professor J. Michael Collins, “Some workers have the ability to save through their employer, but many smaller businesses cannot afford to offer retirement plans. Wider access to retirement savings would improve the financial well-being of Wisconsin’s workers. In general, these patterns are predictable. As highlighted by the report issued by the Governor’s Retirement Security Task Force, Wisconsin doesn’t match states like Illinois in supporting retirement benefits.” Collins, a member of the task force, helped write the report.

An interactive analysis of the family finance poll results is available on Tableau here.

What do residents think about water quality in Wisconsin?

About two-thirds of Wisconsinites receive tap water service at home from a water utility, with one-third getting home tap water from a private well. Respondents rated the state’s air quality slightly higher than its overall water quality.

Professor Teodoro points out that “On average, Wisconsinites favor addressing water quality challenges according to a polluter pays principle. When asked about measures to address water quality:

An interactive analysis of the water quality poll results is available on Tableau here.

How much do Wisconsinites participate in political activities?

Respondents participated in a variety of political activities over the past year, starting with 69% voting in-person sometime during the year and 49% voting absentee, with Republicans more likely to vote in person (80%) than Democrats (63%) or Independents (62%).  About a third of respondents (36%) reached out to contact a public official, signed a political petition (34%) or posted on social media about a political issue (33%).  Respondents who identify themselves as Independents were less likely to participate in most political activities compared to Republicans and Democrats. For example, only 16% of Independents put up a political sign in the last year, compared to 32% of Democrats and 32% of Republicans. The rate of political participation varies little by gender. 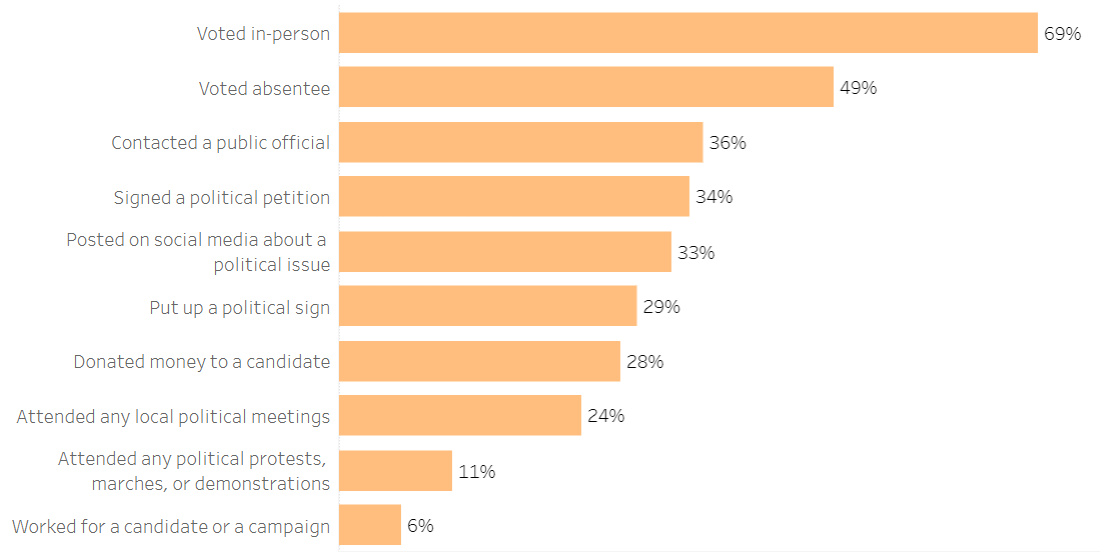 An interactive analysis of the political participation poll results is available on Tableau here.

Interacting with the poll data in Tableau Public

The graphs included in this press release were created in Tableau Public. The poll’s webpage includes a link to a Tableau site where people can interact with the data, creating analyses of the poll results.