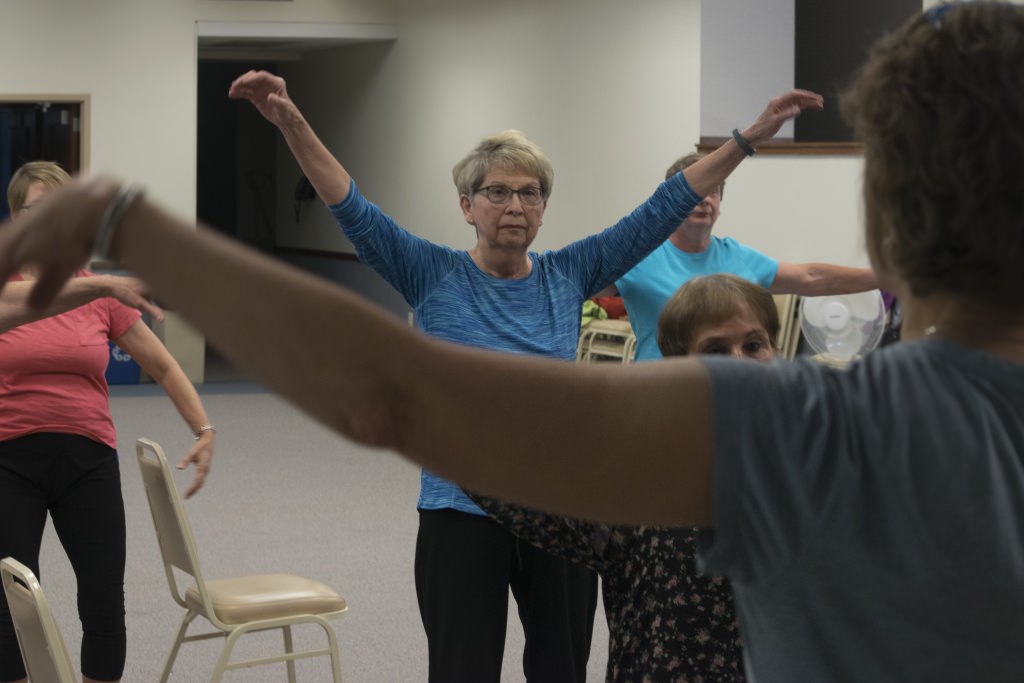 As calming music plays in the background, 11 older women listen as physical therapist Diane Brose enters a warm-up for a discipline known as Tai Chi Fundamentals: “Feel your feet. Feel the four corners of your feet. Your knees are soft, your tailbone is heavy. Don’t worry about yesterday, tomorrow will take care of itself.  Now, we’re here, and it’s safe.”

For these women, safety was a real issue; as they had all volunteered in a University of Wisconsin–Madison study focused on balance. Specifically, could a stripped-down tai chi class, taught in just 12 sessions and also practiced at home, improve balance in people over age 65 who were concerned about balance?

Balance and falls are a major issue for older people, says Betty Chewning, a principal investigator on “Improving Balance for Older Adults,” a grant funded by the Institute for Clinical and Translational Research in a collaboration with the Community Academic Aging Research Network (CAARN) at UW–Madison.

“One in three older adults falls each year, and approximately 30 percent of them suffer serious injury resulting in hospitalization and potentially long-term nursing home stays.  Falls are the leading cause of injury and related deaths among older adults in Wisconsin, which ranks third in the United States in deaths due to falls, according to the Wisconsin Division of Health.”

Jane Mahoney, director of CAARN at the School of Medicine and Public Health, physical therapist Kristi Hallisy, an assistant professor of family medicine, and Dale Wilson of the Sonderegger Research Center research program manager were the study’s other leaders. 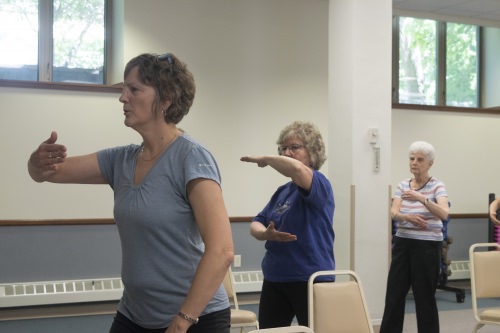 Based on martial arts, tai chi originated in China in the 1300s, and is said to benefit mobility, strength, and peace of mind. It also has proven benefits for falls, says Chewning, a professor of pharmacy. “There are several good studies that found longer tai chi sessions had a positive impact on balance and falls prevention, but we wanted to test a simplified form that could be taught twice a week for six weeks with home practice. We are trying for a realistic, sustainable program that could reach many people in Wisconsin, where older adults have to cope with winter weather.”

The scientific question about Tai Chi Fundamentals and balance will now be analyzed, based on tests performed before and after the course, but the participants I talked to had no doubt that it was working.

“My wife dragged me in kicking and screaming,” says Tom Hench of La Crosse. “I was astonished in six weeks how much my balance has improved. In the last couple of years, I’ve had some vertigo issues, now I feel so much steadier. I love the results and intend to continue. It’s relaxing and enjoyable; it’s not like having to go to the gym, but you do yourself a lot of good.”

“In caring for my husband, I lost a lot of physical stamina,” says Marion Hanson of Onalaska, “and I wanted to improve my posture. When you are in a tai chi position, you are standing with your weight balanced. And I like the mind-body association. I’m trying to figure out what makes the calmness: you are just keeping your mind on shifting your weight and centering your balance.”

The key to the program, Chewning says, was its design by master Tricia Yu, who introduced the ancient practice to Madison in 1974 and in 1996 developed the simplified Tai Chi Fundamentals Program for older adults with an emphasis on promoting strength, balance, coordination, mental focus and peace of mind.  Yu also developed the curriculum, book and DVD, and trained the instructors for the grant.

The six classes, held last fall and this spring in La Crosse, Milwaukee and Madison, each had 20 participants.

Phyllis Branson of La Crosse attended the class last fall. “I’m 87, I live alone, and I’m very aware of being able to maintain my balance,” she says. “When I’m out in a crowd, or around young children, or walking on the grass, I don’t want to be knocked over.  Anything I can do to prevent falling.”

Although the classes were intended to improve balance, there were other benefits. “It’s very restful, peaceful,” says Branson.  “I found if I wake in the middle of the night, if I think about my breathing, it’s easier to get back to sleep.”

Chewning says the program was extraordinarily popular. “When we started talking about offering the course through the La Crosse Aging and Disability Resource Center, the response was overwhelming: we had 200 people on the waiting list. Our hope is that the combination of a short series of classes with home practice will provide the same amount of muscle learning as a longer class.”

The classes also offer a social opportunity, Chewning adds. “I wish we’d measured the number of new friends, the phone numbers that were exchanged, email addresses. When people come for the post-test, I hear people who have not known each other: ‘We just had lunch, and we’re making plans for the next lunch.’ The social element is another healthy piece that we don’t study enough.”  Hallisy agrees, “Master Tricia Yu’s classes have always included a social tea time to foster social connections and tai chi practice.”