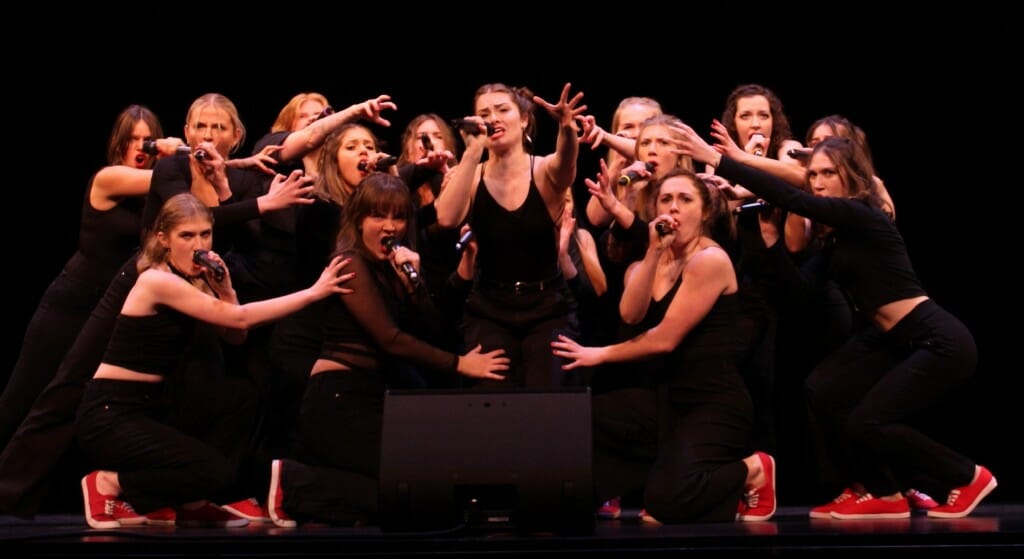 Pitches and Notes performs during the competition’s semifinal round.

On April 23,  the UW–Madison treble group Pitches and Notes made history, winning first place at the International Championship of Collegiate A Cappella finals in New York City.

Pitches and Notes is the first group from the Great Lakes region to ever win, and the first treble group to win in 15 years.

For senior and Pitches member Hyunji Haynes, the win was a surprise. “We were so stunned,” she said, “we are truly so honored to have gotten to share the stage with the best groups across the country and beyond.”

Haynes extended gratitude to UW: “We are thrilled to bring these accolades home to UW and the greater Madison community. We could not have it done it without all the support!”

Haynes, along with two other Pitches members, Leah Terry and Sophie Jester discussed the competition, preparing for finals, and the value of Pitches.

There are 17 members in the Pitches and Notes treble group.

Pitches won first place in the quarter-finals at Shannon Hall in Memorial Union, guaranteeing them a spot in the next round.

Semifinals in Chicago came next, which they described as a hard rehearsal process. “It was pretty intense going into semifinals,” Terry said, “but we kept the mindset of, ‘we’re just so proud to have gotten to this point, and we want to leave the stage knowing we put it all out there.” 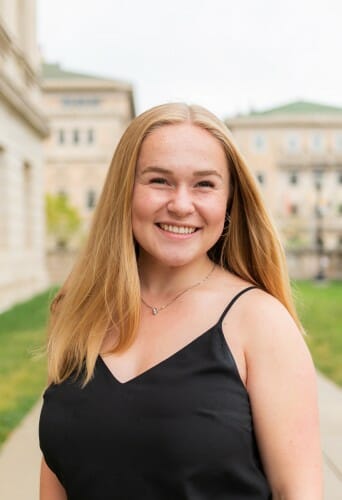 Terry joined Pitches and Notes before she even matriculated at UW. In Pitches, she is an alto. She signed up soon after she committed to UW–Madison. “I knew I wanted to keep doing music throughout my college career, [and] wanted to see if a capella was something I would like,” she said.

After finding Pitches and Notes her freshman year, she knew she’d found her place; it was the group for her. “I immediately fell in love with the group, their music, and their energy,” Terry said.

Hyunji Haynes is a senior. She attended high school with one of the current Pitches music directors,where she participated in travel a capella. 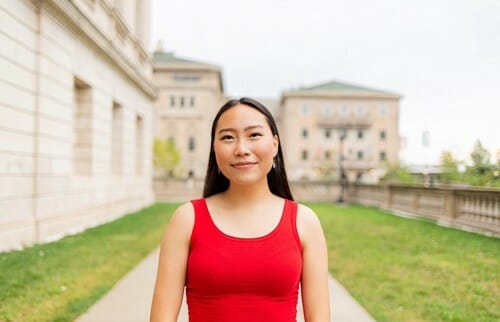 When Haynes came to UW, her friend introduced Hayes to Pitches and Notes. “I signed up the night before auditions and showed up with Clo (her friend),” Haynes said. “It was very spontaneous, and I’m really glad I joined.”  Haynes always sings bass. 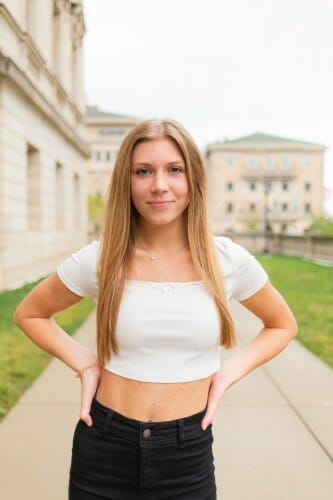 Sophie Jester, a sophomore, joined Pitches and Notes in Fall 2021, after seeing the group at the UW Student Org fair. “Everyone was so friendly,” Jester said. “I’ve always done music and I love singing and [Pitches] was just such a fun way to continue that.”  Jester mostly sings bass, and occasionally alto.

It seemed the hard work and rehearsals paid off: Pitches and Notes placed first in semifinals, gaining their admission to a coveted spot in the ICCA finals in New York City. “It was an intense rehearsal process, but after [finding out that we won] there was an overall sense of gratitude and love for each other,” Terry said.

While the group was preparing for finals in New York, they were also gearing up for their Spring Show, which will be on May 1 (location TBD).

“We were grappling with canceling our spring show,” Haynes said, “but we decided to go through with the spring show [because] it’s dedicated to our graduating seniors, and we have a lot this year.”

Pitches and Notes tends to sing pop songs, but occasionally incorporates songs from other genres. “There’s a range [of songs] with different emotions,” Jester said.

Terry, Haynes, and Jester all shared what they love about Pitches and Notes.

For Terry, it’s rewarding to be on stage and see all the progress and work put in by the group. “It’s so awesome because it’s my favorite music I’ve ever sung in my life,” she said.

She added, “When it first clicks and we’re satisfied with how we sound in our set or song, the feeling is unmatched… I never get tired of that feeling.”

Haynes added, “[our group] is always changing because seniors leave, and we’re always getting new members… it’s such a unique group every single year.”

Haynes also commented on the song choices: “I think choosing music that reflects our group members at that time is a reflection of our creativity and musicality,” she said.

Jester has found community and bonding during her time in Pitches. “It’s great because everyone in the group brings a different perspective, so it’s really exciting to be around all these people,” she said, “I’ve never met people who are so positive and care so much about this group.” 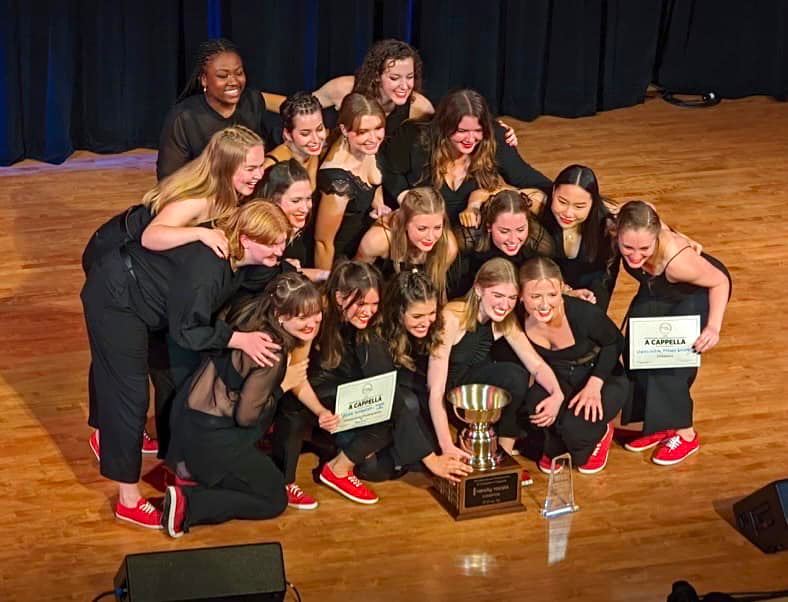 Pitches and Notes members pose with their trophy.