Pigs play a critical role in fight against NF1 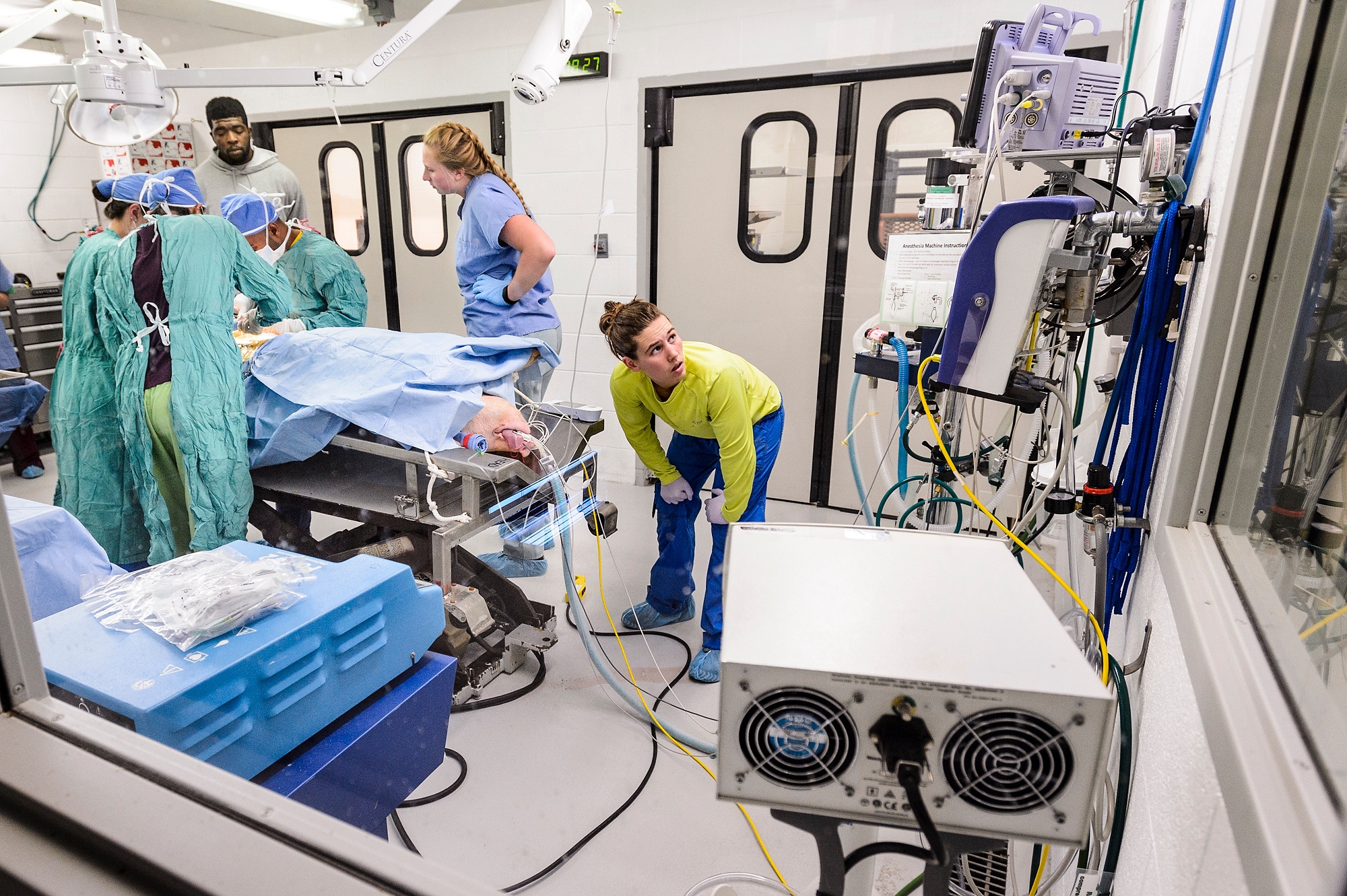 At center, Morgan McCue monitors the vitals of a pig that will serve as host mother for genetically edited embryos. Photo: Jeff Miller

Under the warmth of a heat lamp, Jen Meudt knelt next to a 250-pound pig, stroking her gently and coaxing her out of anesthesia.

The pig had just undergone surgery at the University of Wisconsin–Madison Swine Research and Teaching Center (SRTC) to implant her with gene-edited embryos. The hope was that, in just under four months, she would give birth to piglets harboring a gene for the disease neurofibromatosis type 1, or NF1.

Jen is part of a research team developing a new animal model to better understand and treat children born with NF1, a genetic disorder responsible for a host of symptoms, from soft bones to cognitive disorders and debilitating tumors.

As researchers and physicians look toward improving outcomes for these children, pigs are key to their work. Pigs are similar in size to humans, develop critical immune responses, have cognitive abilities capable of being measured, and are easily trained, making them well-suited to the study of human diseases.

“NF1 can be a devastating disease for some families and previous work in animals like mice and fish has told us a lot about the disease, but it hasn’t taken us far enough,” says Dhanu Shanmuganayagam, who leads the work. “Pigs, treated with care here at the Swine Research and Teaching Facility, allow us to move forward, testing treatments and therapies and studying the biology of the disease in ways we can’t with other models, or in the children themselves.”

The SRTC, directed by Thomas Crenshaw, professor and chair in the department of animal sciences, is housed within the Arlington Agricultural Research Station located 35 minutes outside of Madison. Run by Jamie Reichert and his team, the facility houses 1,500 swine, including some that are involved in research studies like the NF1 work. The facility is biosecure – researchers must shower in and out of the facility and don communal scrubs in order to protect the animals from pathogens. It is also designed to be an educational facility, for both students and the public.

The surgery on the female pig was carried out by a well-trained team: veterinarian Ana Cecilia Escobar López, the center’s research program manager, along with Jen and Dhanu. They were assisted by two graduate students and two undergraduates, who monitored the pig’s vitals, tracking her respiration rate, her anesthesia levels and her heart rate.

The NF1 researchers have designed their studies to use the fewest number of animals possible, Dhanu says, and they are working toward methods that further minimize their use. Pigs born with the NF1 mutations can, in some cases, be used for breeding, which reduces the number of surgeries necessary.

Once surgery was over, the scientists removed the pig from the gurney and carefully moved her under the heating lamp. Jen stayed with her as she recovered. She would join the other facility swine when she was ready.