Phone to farmer: Fungus on the way, time to spray

The struggle against plant disease will never end, but farmers can now get a boost from big data, advanced predictions, and, of course, the computer-in-a-pocket called the smartphone.

The approach is straightforward: The apps and models compare current weather to historic data about conditions that are conducive to a particular plant disease, then calculate whether it makes sense to spray fungicide – or not spray and reduce pesticide use.

“In plant pathology, we talk about the disease triangle,” says Damon Smith, an associate professor of plant pathology at UW–Madison, who led development of apps and models focused on diseases of turf, soybean and corn. “This means that the host plant, the pathogen, and the weather must be present for an outbreak to occur. But because in most cases, the susceptible host and pathogen are both present, we can focus on the weather, especially temperature and humidity.”

In general, warm, humid conditions are most conducive to plant fungi – the major category of plant pathogens.

Smith, working with James Kerns, formerly of UW–Madison and now at North Carolina State University, used these principles to create the Smith-Kerns model, now embodied in online tools for predicting dollar spot, a grass disease endemic to Wisconsin golf courses and beyond.

The model relies on logistic regression, a common statistical means to correlate events and outcomes. Once the user has weather information from onsite or the “cloud,” that information can be entered in online spreadsheets to calculate if a fungicide spray is needed or not.

Because the model is not patented, it was available for incorporation in a turf-management program from the agrichemical giant Syngenta, and the private agronomy consulting group Greenkeeper. 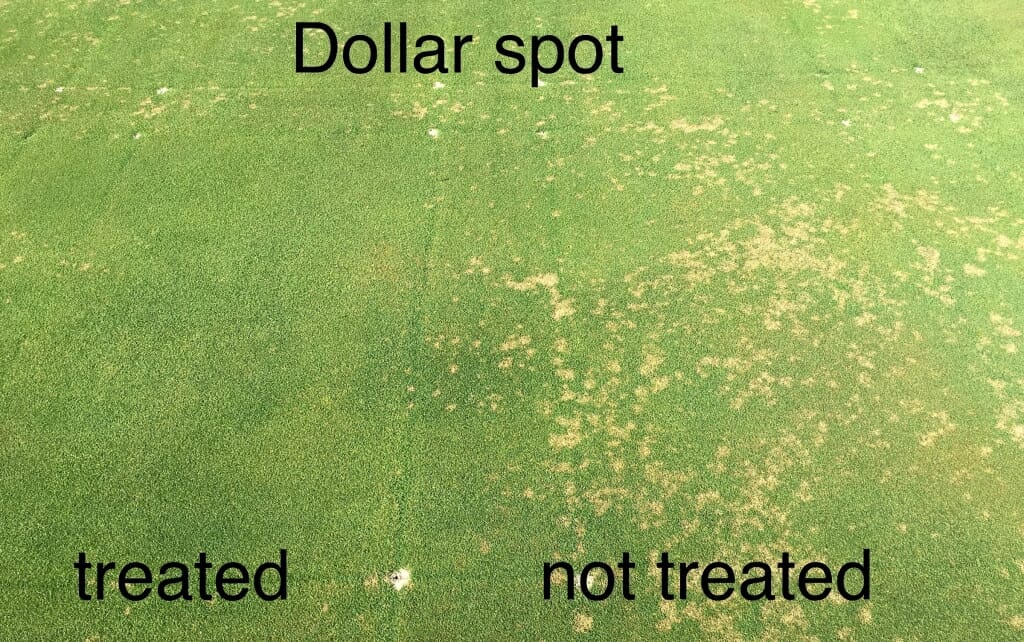 Dollar spot is the biggest disease problem on Wisconsin golf courses. Fungicide spraying is expensive but effective. A dollar-spot app, based on analyses at UW–Madison’s department of plant pathology advises golf-course superintendents when to spray, allowing control while minimizing pesticide runoff. Photo by Paul Koch

Having shown how the strategy could help control one plant fungus, the UW–Madison researchers decided to expand. “I figured the underlying framework that runs the dollar spot app could be used in other plant-disease systems,” says Smith, “starting with the soybean white mold epidemic.”

Dollar spot is the biggest disease problem on Wisconsin golf courses. Fungicide spraying is expensive but effective. A dollar-spot app, based on analyses at UW–Madison’s department of plant pathology advises golf-course superintendents when to spray, allowing control while minimizing pesticide runoff.Smith and his collaborator, Paul Koch, a UW–Madison assistant professor of plant pathology, also work with UW Extension. 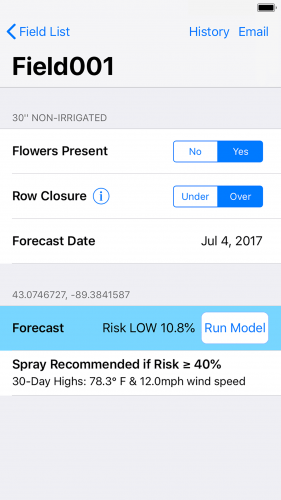 The Sporecaster app for controlling white mold in soybeans suggests spraying fungicide when the risk exceeds 40 percent – far above the risk calculated for this field. Image from Roger Schmidt

During the white-mold season in summer, 2018, their newly developed smartphone app, called Sporecaster, was used an average of 250 times daily. “It’s crazy that we were getting that much traffic,” says Koch, who helped verify the app’s accuracy.

Smith next moved to tar spot, a fungal disease that is plaguing Wisconsin corn fields. “This year [2018], the weather was conducive, and tar spot started at a really important time for the corn crop,” says Smith. “In August, the rain started, and the flooding, and the train came off the tracks with the epidemic of a lifetime. In Southwest Wisconsin, some corn fields lost 40 to 60 bushels per acre.”

The worst could be yet to come, says Smith, noting that tar-spot spores survive winter and no corn hybrid is completely resistant. Despite the risk, with corn prices low, farmers want to minimize costly spraying.

Researchers will collect data in 2019 to evaluate the tar spot app’s accuracy, though they may post their results weekly on the web. “I want to be absolutely sure when we release that it will be accurate,” says Smith.

All of agriculture is going toward data driven decision-making, Smith says, but the best technology must be accurate – and easy to use. “The advances have come in collecting, manipulating and using the data to inform decision making. We call this the ‘cuppa coffee’ approach. If you can sit with your coffee in the morning and get a forecast for disease, then we were successful.”

The apps don’t just protect crops and save money for farmers, Koch says. “The models enable a reduction in spraying, and that, combined with the use of less impactful products, indicates a reduction in the environmental damage from disease management by at least 75 percent, versus traditional approaches.” 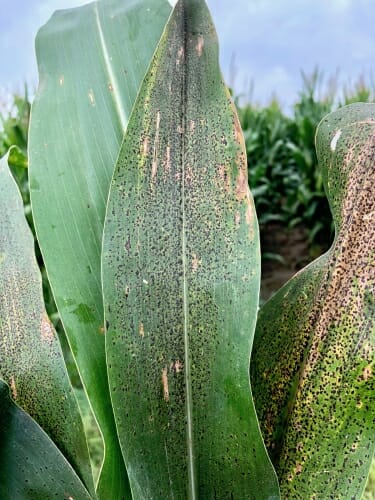 Tar spot fungus intensified in Wisconsin corn in 2017. Hot spots in Southwest Wisconsin saw as much as a 20 percent drop in yields in 2018 Photo by Damon Smith

The new apps are data-driven enhancements on a venerable pest-management approach called Integrated Pest Management. IPM has long attempted to replace blanket spraying with a sophisticated evaluation of pest susceptibility and side effects, to reduce both the dollar and environmental costs of pest, disease and weed control while retaining effectiveness.

“The traditional sense of IPM is to go out and scout fields, look for signs of disease and even count fungal infection sites or microscopic spores,” says Koch. “Now we can reach the same goal remotely, by focusing on weather and what we know about how pathogens react to weather.

“Using weather  to inform your decisions will only become more important as the climate continues to change,” says Koch. “Last summer wasn’t particularly hot, but it was humid and warm at night, making it prime for dollar spot and several other diseases. Summers are getting to be more like St. Louis here in southern Wisconsin, and this must change how disease is managed.”