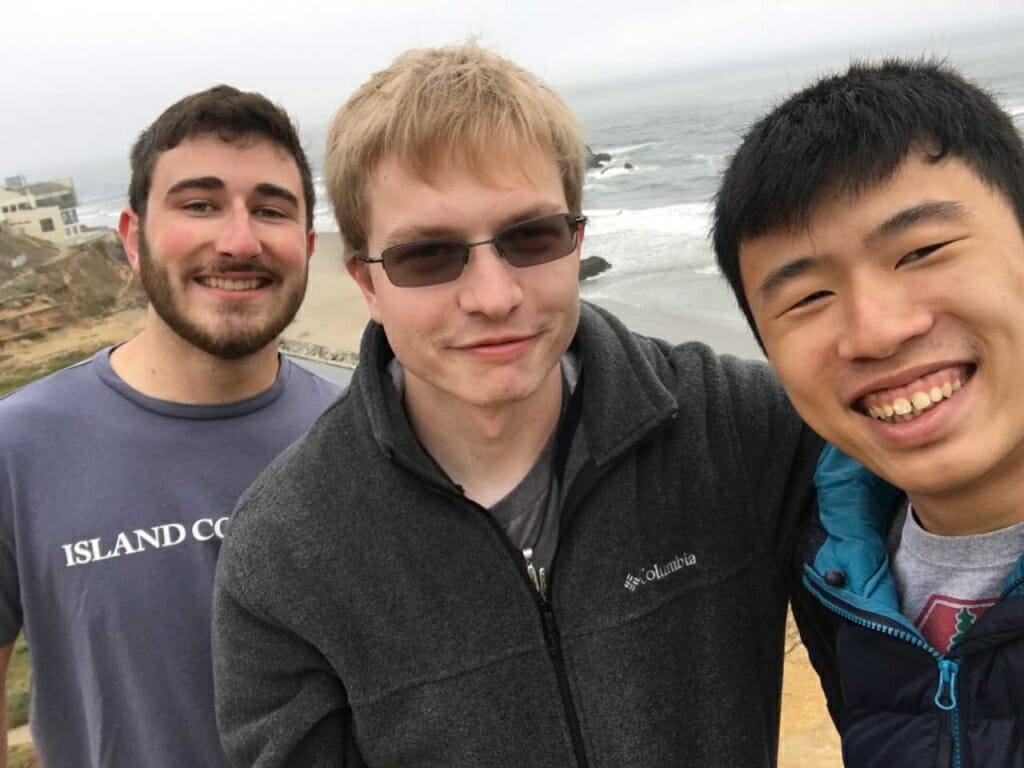 Neil Perry (center) and two friends from Horizon School of Technology, a coding bootcamp he attended as a sophomore at UW.

When Neil Perry Skyped with his parents during a month-long student ambassadorship in Australia, they said he didn’t look right. Perry – now a senior at UW, then a freshman in high school – told them not to worry. He was just tired, he said.

By the time Perry was back on U.S. soil, he was running a high fever. Doctors in his hometown of Platteville said he had the stomach flu. Days passed and he showed no signs of improvement. Soon he was unable to walk. It wasn’t until he was facing death and his mother had repeatedly taken him to the hospital that physicians from Mayo Clinic correctly diagnosed him: he been infected with the Australian version of the West Nile virus.

The virus, imparted by a single mosquito somewhere in the Australian Outback, had robbed him of his sophomore and junior year. But, in numerous, individual ways, the virus simultaneously set off a chain reaction of self-discovery, dedication and exploration which continues to this day.

Determined to graduate with his class, Perry took classes from home. One semester he took 14 classes.

“It eventually allowed me to see the world differently, and I found areas where I thought I could make a difference,” Perry said.

One vestige of Perry’s long-winding path landed him as a finalist for the 2019 Marshall Scholarship. The scholarships give high-achieving young Americans the opportunity to study at any university in the United Kingdom. Eligibility is open to college seniors and recent graduates.

It’s the latest in a string of awards for Perry, including a Churchill Scholarship Nomination, the Vilas Scholarship, and a 4th place finish in the Jane Street Trading Competition.

At some point in the year that Perry battled the virus, he developed several ailments, including allergies, that only physical therapy and diet could fix. Special tests revealed that his body could no longer process fructose. Gluten, being largely made up of fructose, had to be cut from his diet.

In 2018, that may not be too hard of a problem to solve. Most grocery stores and increasing numbers of restaurants have gluten-free options. But in 2014, in a small, rural area of Wisconsin, going “gluten-free” wasn’t really a thing.

“The grocery stores just did not stock things like this, so I had to get creative,” Perry said.

Taking a year off between the end of high school and the beginning of college, Perry decided to build a company that would help health-conscious people like himself eat better and cheaper. He and his family landed on the idea of spiralizing noodles out of vegetables. 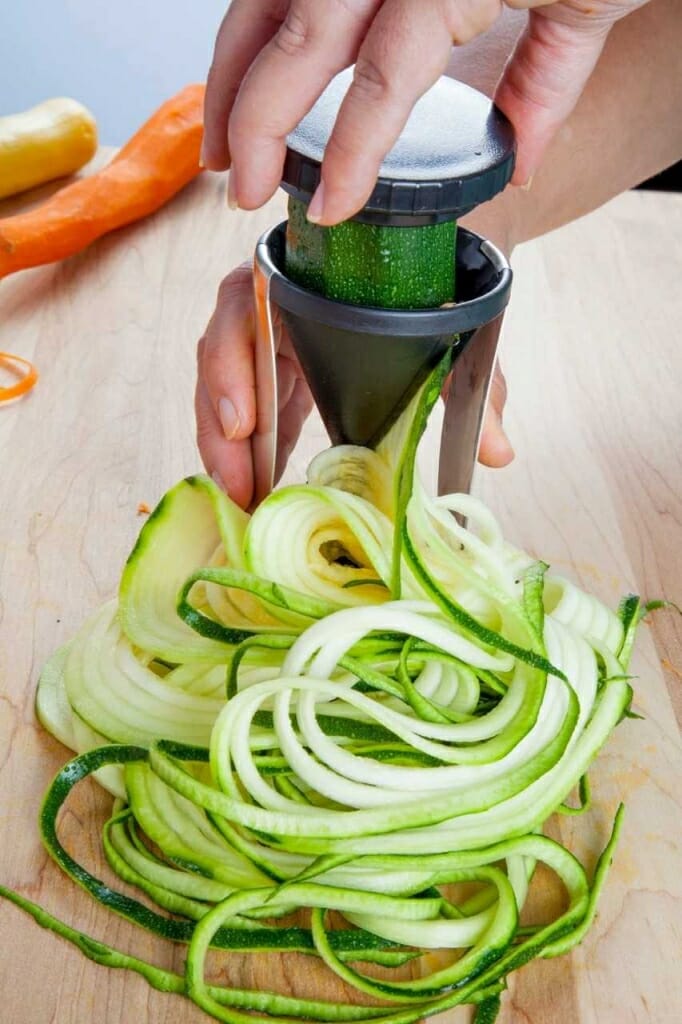 Voila, Perry’s first company and first product, soon to be called “Spaghettable,” was born. Spending all day, every day reading the business books that overflowed from the walls of his family’s home – the same books read by his entrepreneurial father during the creation of numerous of his own businesses – he tried to figure out what it takes to run a business.

Forming connections across four countries, including a factory in China that he found on AliBaba.com and package designers he found on freelance forums, Perry would turn his illness into a six-figure business.

“It was my first taste of working in an international environment, and I loved it,” Perry said.

In his sophomore year of college, he was selected to spend the summer in Silicon Valley at the Horizon School of Technology. Half immersive coding bootcamp, half real world job, he connected with myriad Silicon Valley successes, including the first engineer for Wish, an alternative to Amazon; programmers from Google; and a designer of the Apple Watch.

During a hackathon, some teams chose areas they excelled at in order to win. Perry and his group chose a different path.

Unfamiliar with artificial intelligence and wanting to learn more about it, his group decided on developing a service that could deliver medical advice to people in Africa who didn’t have access to the internet. A person could send a text message with their symptoms to their service and, after a process that involves translating the text from four different languages and feeding it through an A.I. program, receive a message saying what ailment they might have and what they should do about it. The service landed Perry’s team a finalist spot. 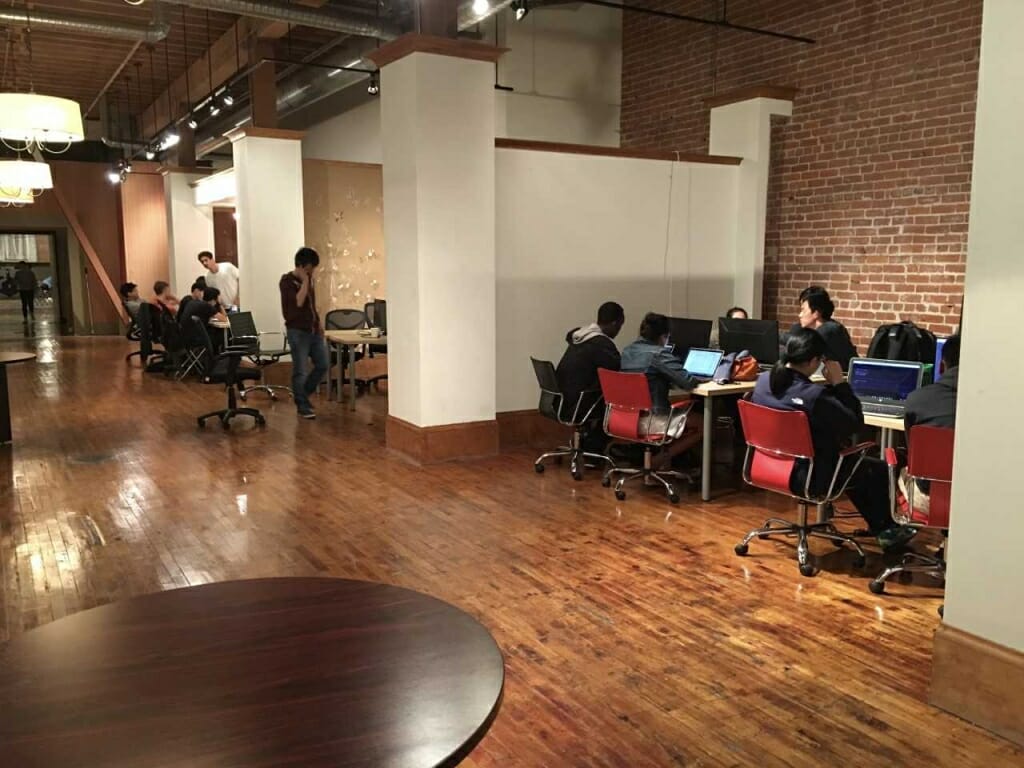 The inside of Horizon School of Technology in San Francisco. CREDIT: Neil Perry

Perry was drawn to the Marshall scholarship because the University of Cambridge in the U.K. has one of the best computer science programs in the world. With Brexit, the impending withdrawal of the U.K. from the European Union, interest in blockchain has increased, and he hoped to contribute to developing this still-nascent and potentially transformative technology.

Blockchain, the underlying technology of cryptocurrencies, can provide a perfect, detailed history of a supply chain, from where an object was manufactured to where it is sold. For the trade deals, regulatory rules, and existing supply chains that will have to be renegotiated, blockchain offers a better way of doing things.

“It’s almost this perfect testing ground to get to see rapid results of what is possible,” Perry said.

Perry dove into blockchain research alongside computer science professors Remzi and Andrea Apraci-Dusseau. Specifically researching Ethereum, one of the largest cryptocurrencies, and its security, Perry discovered for the first time how research can directly improve people’s lives and make the world a better place.

Perry thanks graduate students Ram Alagappan and Aishwarya Ganesan, professors Remzi and Andrea Arpaci-Dusseau, Horizons co-founder Abhi Ramesh, Principal at VN Capital Management James Vanasek, and his mom, among others, for helping him get to the point he’s at today.

“Nothing I’ve done would be possible without them,” Perry said.

One day he hopes to start his own technology business. What that business will be is anyone’s guess. His future, like his past, is hard to predict.

“I’m still learning so much stuff that I don’t know how I’m supposed to know exactly what that should be yet,” Perry said. “Every month I learn a new thing, and then I get a new idea of something I want to try or I go back and tweak old ideas I’ve had, so I’m sure that what exactly that thing is is going to be a changing, evolving thing.”

A few months before he left for Horizon, Perry’s father was diagnosed with terminal colon cancer. This past May, he passed away.

“My dad loved me enough to help me forge all of the tools that I would need to help build a better world,” Perry said.

For the past two years of college Perry has lived at home to help his family. He and his sister even raised $2,000 for cancer research. But between triple majoring in computer science, economics, and mathematics, interning at a hedge fund, and conducting research as part of Professor Arpaci-Dusseau’s group within the CS department, he hasn’t had much time to study, let alone sleep. He said he’s averaging five hours of sleep a night.

Perry drives halfway to UW and then hops on a bus which takes him the rest of the way. When the day’s over, he will do the process in reverse. It’s really hard, Perry said, and he doesn’t do it perfectly. But he’s learning, evolving.

“My sister has a big math test next week I have to help her study for,” Perry said, proudly.