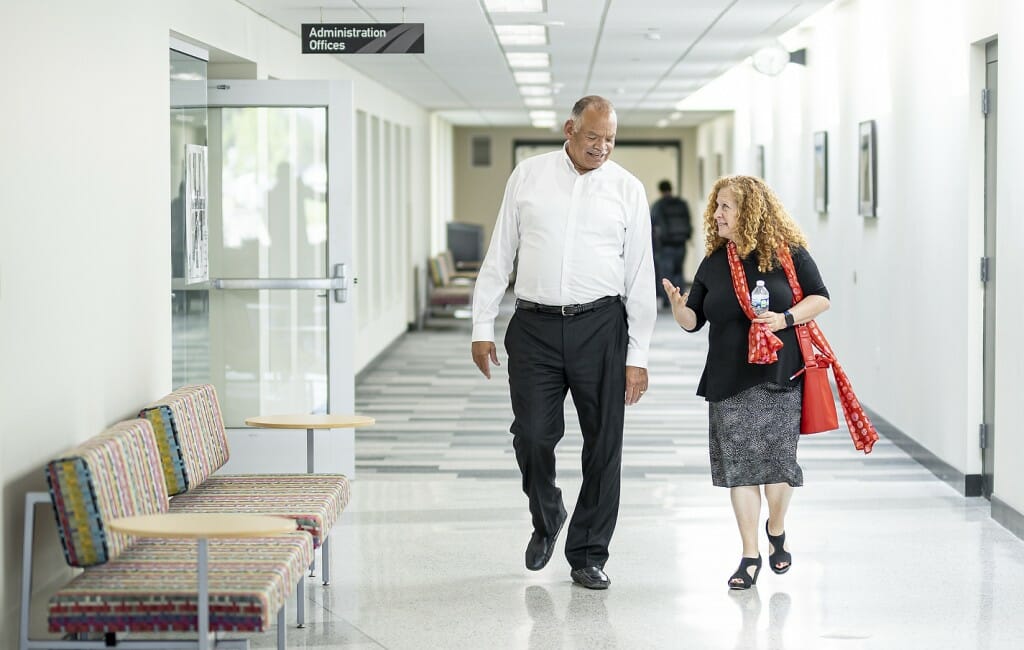 University of Wisconsin–Madison Chancellor Jennifer Mnookin talks with Jack Daniels, President of Madison College, as she tours the Truax Campus of Madison College on Aug. 11, 2022. This meeting was one of several that Chancellor Mnookin took part in as she continued to make connections within the Madison community and the state during her first week on the job as the new chancellor. Photo: Bryce Richter

It’s mostly underutilized land today, but within a couple of years, the site on Madison’s south side is expected to be home to The Center for Black Excellence and Culture — a three-story, 65,000-square-foot space touted as unlike anything else in the country.

“We want it to be a hub for folks who strive for Black excellence to meet each other,” said the Rev. Alex Gee, the center’s founder and CEO, as he described the project and showed the site to UW–Madison Chancellor Jennifer L. Mnookin on Thursday, Aug. 11, 2022.

The stop was one of three that afternoon as Mnookin, the university’s 30th leader, continued meeting and learning from people in her new city and state on her seventh day on the job.

In addition to leading the effort to build The Center for Black Excellence and Culture, Gee is the president and founder of the Nehemiah Center for Urban Leadership Development. Nehemiah is using a Community Impact Grant from the University of Wisconsin School of Medicine and Public Health’s Wisconsin Partnership Program to improve health within the Black community.

“Your faculty are just phenomenal,” he told Mnookin. 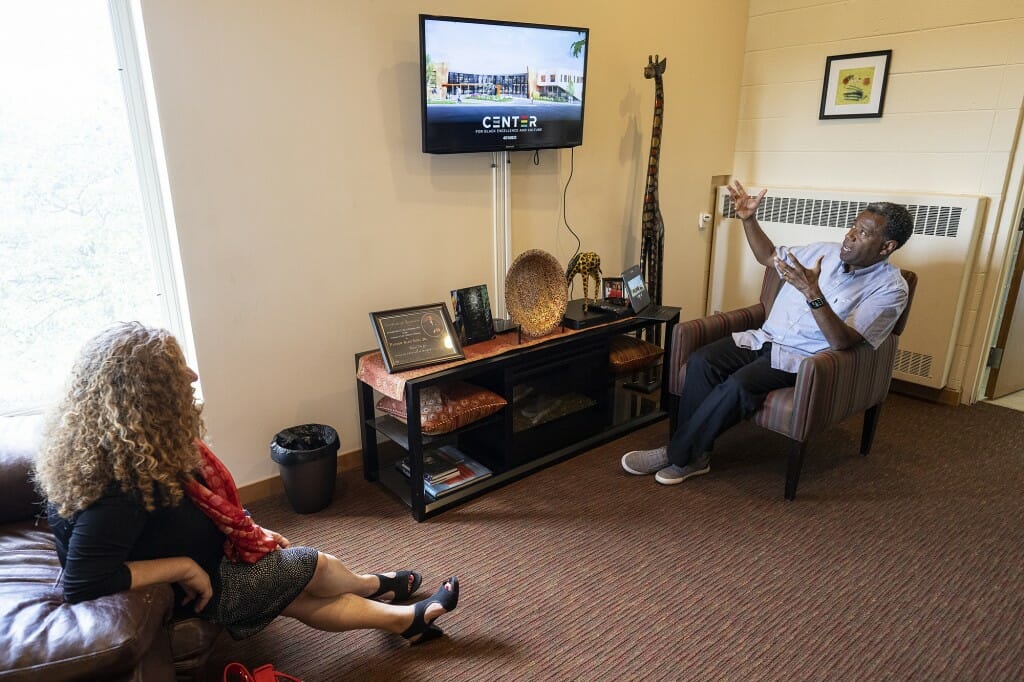 Chancellor Mnookin talks with Rev. Dr. Alex Gee, President and Founder of Nehemiah Community Development Corporation, in his office on Madison’s south side. Dr. Gee spoke about his work to bring The Center for Black Excellence and Culture to Madison. Photo: Bryce Richter

As he shared his vision for the new culture center, Gee emphasized his desire to collaborate with the university on research that would be based at the center and that would respect and benefit the people who take part.

“We want to model a partnership where a community-based organization says to a major university, ‘Let’s work together, let’s go for grants together, let’s really help the community find solutions to heal itself,’” he said.

“This is a real opportunity for us,” she told Gee. “It’s not a potential gift we’re giving you. It’s an opportunity for us to find some new lanes to do really interesting, important, engaged research that can help produce knowledge — that is the Wisconsin Idea.”

Earlier in the afternoon, Mnookin met another alumnus working to transform the community.

“Welcome to Madison — my alma mater!” Kaleem Caire said, as he greeted Mnookin at One City Elementary School, a tuition-free public charter school authorized by the University of Wisconsin System’s Office of Educational Opportunity.

Among the school’s objectives is breaking the cycle of longstanding gaps in achievement and opportunity for children of color and under-resourced children.

“We want to model a partnership where a community-based organization says to a major university, ‘Let’s work together, let’s go for grants together, let’s really help the community find solutions to heal itself.’”Rev. Alex Gee, president and founder of the Nehemiah Center for Urban Leadership Development and CEO and founder of The Center for Black Excellence and Culture

Caire earned a bachelor’s degree in education from UW–Madison and influenced the creation of the university’s Precollege Enrichment Opportunity Program for Learning Excellence (PEOPLE). In 2008, he was among the first recipients of the university’s Forward Under Forty Award. The same year, he was named a Distinguished Alumni by the University of Wisconsin Alumni Association for his work in education and community development.

One City Schools currently serves grades 5K through 4th at its Monona campus near South Madison. It also operates a private, independent preschool in South Madison off South Park Street. At its Monona site, it will add grades 5, 6, 9 and 10 this coming school year, with plans to become a full K-12 school by the 2024-25 school year.

Caire gave Mnookin a tour of the school’s $32 million renovation and expansion project. He pointed out the development of several innovate spaces, including a beauty/barber salon, a student-run DJ booth, a school store, a credit union branch office and an indoor play space. 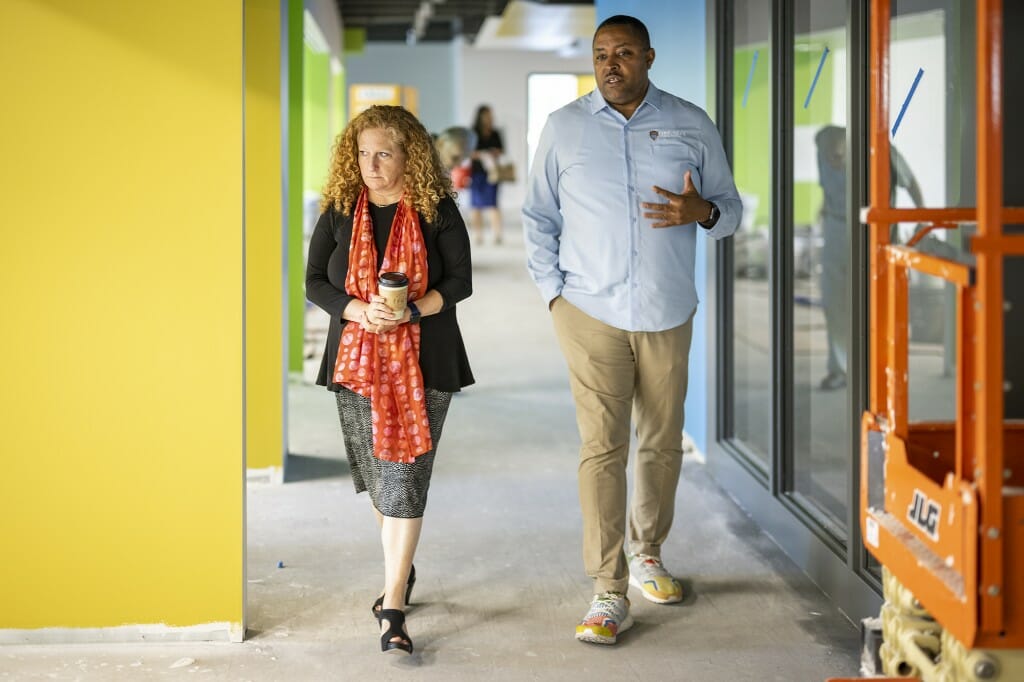 Chancellor Mnookin meets with Kaleem Caire, the Founder and CEO of One City Schools, as she tours the new renovation space for the One City Elementary School near Madison’s south side. Photo: Bryce Richter

Caire and Mnookin spent considerable time discussing how they could collaborate to break down barriers to higher education.

“We hope a majority of our kids will end up at UW–Madison,” Caire said.

“We want that, too,” Mnookin replied.

At the Truax campus of Madison College, Mnookin toured the grounds with the college’s president, Jack E. Daniels III. The college is one of UW–Madison’s largest transfer partners — recent agreements between the two institutions are expected to help address nursing workforce needs and bolster and diversify the state’s teacher workforce. Another new agreement provides a direct path to a UW–Madison business degree.

“It was great to meet with the chancellor and solidify our strong relationship — just fantastic,” Daniels said later. “I’m looking forward to improving that relationship, especially for our students.”

Madison College is known for, among other things, its culinary arts degree and the many accomplished chefs and bakers who developed their skills while cooking for the campus community. In parting, Daniels invited Mnookin to return when school is in session to taste what everyone is talking about.

“I want you to come back this fall so you can get some great food,” he said.