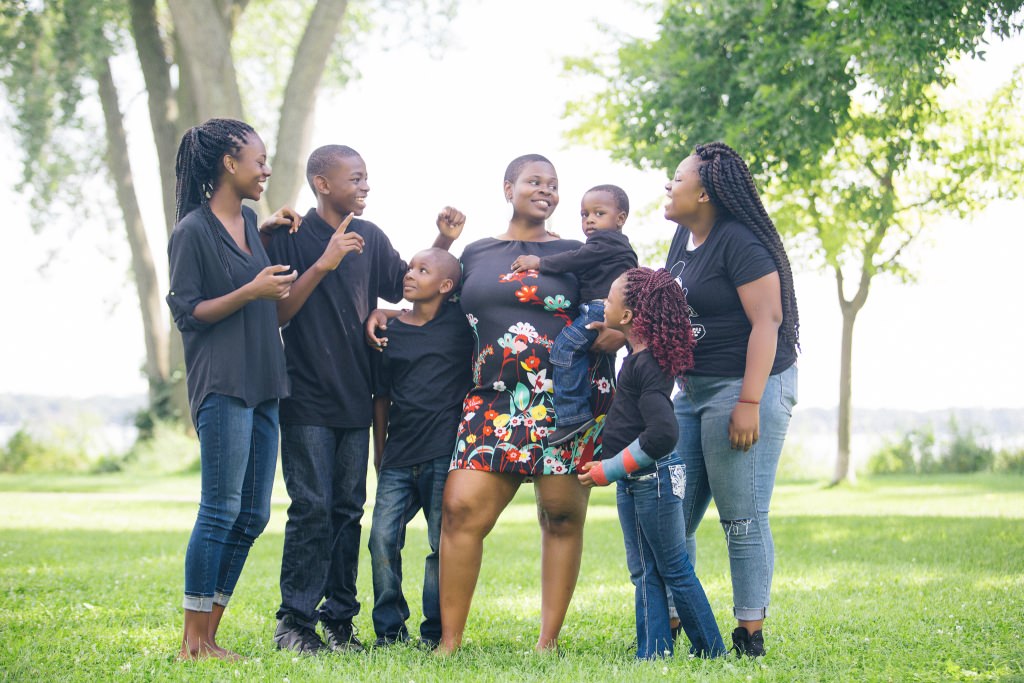 Sagashus Levingston, center, is working toward a Ph.D. in English literature, even while raising her six children.

Sagashus Levingston is not your typical college student.

She’s spent the last 10 years at the University of Wisconsin–Madison, working simultaneously towards her master’s degree in African American Studies, which she earned in summer 2009, and a Ph.D. in English Literature, which she will achieve in early 2017.

And she’s done all this while raising six kids.

For many of us, the term “college student” evokes images of a young person with a whole realm of possibilities ahead of them, charting a course for their future. But 26 percent of undergraduate students nationwide are raising dependent children while earning their degree.

Federally funded programs administered through OCCFR — like the Child Care Tuition Assistance Program (CCTAP), which helps pay for child care while student parents are attending class — can be attributed to this positive outcome.

For Levingston, programs like CCTAP along with a single parent support group and parenting workshops were invaluable.

“I had no idea how to be a student with children away from my family, and so [OCCFR] taught me a lot,” says Levingston, “not to mention the fact that I can come in here and just talk to anybody, any given moment. That made a difference. People who actually specialize in helping people with children and family issues.”

Growing up in a housing complex in the Bronzeville neighborhood on Chicago’s South Side, Levingston was used to being in an environment that was like a large extended family.

“I knew if I was going to succeed here, I had to kind of recreate my own version of that,” she said.

She found refuge living in Eagle Heights, with its diverse community and access to so many programs.

First inspired by watching her mom earn her undergraduate degree — albeit over a span of twenty years — and then by her experiences in boarding school, Levingston always knew her path led to college. However, after being accepted at 15 out of 17 undergraduate schools she applied for, including Smith and Bryn Mawr, she suddenly felt lost because no one had prepared her for what was next. Attending boarding school in Lake Forest, an affluent suburb of Chicago, Levingston didn’t even know about financial aid — it had never come up in the conversation as most of her classmates didn’t need it.

Ultimately, she earned her undergraduate degree at the University of Illinois at Chicago, within commuting distance of her South Side neighborhood. Then she blazed her trail to Madison, three kids in tow. It was here that she fell in love with what she was doing, fully committing to her education and starting the groundwork for her Infamous Mothers project, which encourages women to share their remarkable journeys through motherhood and challenges perceptions of black mothers.

Officially launched this past summer, Infamous Mothers has already garnered media attention, and Levingston herself recently gave a TEDx talk at the Overture Center. The organization is set to release a coffee table book soon that will highlight the stories of mothers who have risen out of adversity and become remarkable, powerful women.

Eventually, Levingston hopes to be in a position to extend resources to other single mothers with large families who are trying to make school. Her own family, which grew to seven during her tenure here, was often something unexpected for many different agencies on campus and around Madison.

“The good thing about OCCFR is, even though they didn’t expect me, people made room for me, and they figured things out and they worked the numbers and they extended this and they found resources in that place,” says Livingston, who needed services like emergency diapers when she first arrived in Madison. “All types of things that I wasn’t expecting that kind of helped me navigate and figure out how to get on my feet, [OCCFR] made possible because of the resources.

“All of these things that other people may see as a privilege or a luxury but these are the things that I needed, I absolutely needed because of the size of family that I had, because of the small amount of resources I had. [OCCFR] had become an extension and lifeline for me. I love this office!”

Levingston speaks with pride about oldest daughter Dianna Murray, recently featured in Isthmus for her involvement in Tomorrow’s Educators for Equity in Madison, or TEEM, a teacher training program which aims to increase diversity in teaching staff within the Madison Metropolitan School District.

Levingston and her children certainly encountered their share of bumps in the road, and pressure came from home to quit and move back. There were times when she was up in the middle of the night, despondent.