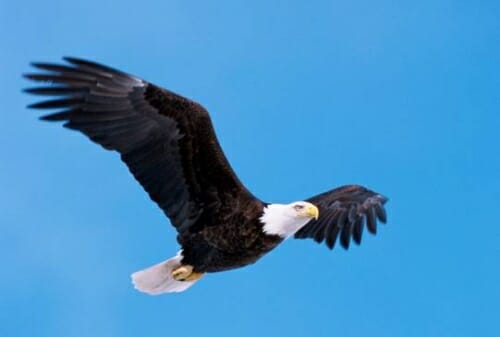 The bald eagle was removed from the endangered species list in 2007 after recovering from a low of 412 nesting pairs in the contiguous United States. There are now about 1,700 nesting pairs in Wisconsin alone. U.S. Fish & Wildlife Service

Scientists at the University of Wisconsin–Madison, the U.S. Geological Survey  National Wildlife Health Center and the Wisconsin Department of Natural Resources found the virus while searching for the cause of Wisconsin River Eagle Syndrome, an enigmatic disease endemic to bald eagles near the Lower Wisconsin River. The newly identified bald eagle hepacivirus, or BeHV, may contribute to the fatal disease, which causes eagles to stumble and have seizures.

But BeHV was also found in eagles without symptoms of the syndrome, making a direct link between virus and disease difficult to confirm. The virus is related to human hepatitis C virus, which causes liver damage in people, and some birds with BeHV show similar effects. BeHV infects eagles from Washington to Florida but is most common in Wisconsin’s eagles. 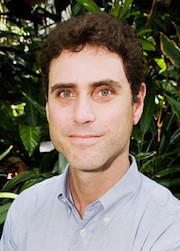 The researchers published their findings Oct. 18 in the journal Scientific Reports. Tony Goldberg, a UW–Madison professor of pathobiological sciences in the School of Veterinary Medicine, led the study. He collaborated with LeAnn White at the USGS National Wildlife Health Center and Sean Strom at the Wisconsin Department of Natural Resources.

Wisconsin River Eagle Syndrome (WRES) was first described in the 1990s. The river attracts eagles year-round because its open waters allow the birds to fish through the winter. Observers near the river spotted eagles vomiting or staggering, and all of these birds either succumbed to the disease or were euthanized.

Officials at the USGS National Wildlife Health Center conducted necropsies to determine the cause of death and found liver damage in most of the birds. Damage to brain tissue was also common. Searches for environmental toxins underlying the disease came up empty. 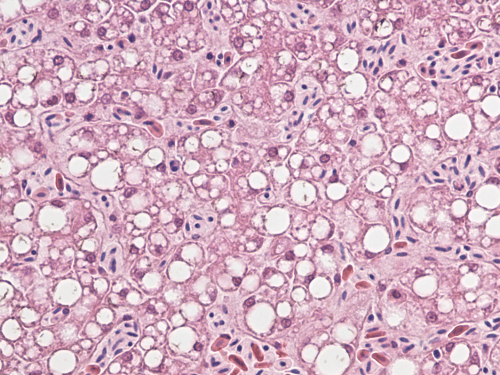 A microscopic image of a liver from a bald eagle that died from Wisconsin River Eagle Syndrome. The large white spaces demonstrate tissue damage characteristic of the disease. Photo: Marie Pinkerton

“Everything was pointing toward some unknown virus, but standard diagnostic techniques couldn’t find one,” says Goldberg.

Goldberg’s lab specializes in discovering new viruses. By analyzing all of the genetic material in infected tissue, his team can scan for the genetic signature of any virus within the sample. The technique does not require prior knowledge of what kind of virus might lurk within an animal.

Working with White and Strom, Goldberg’s lab analyzed liver tissue from nine birds diagnosed with WRES. The team first spotted the new virus in a bald eagle collected in 2002 in Sauk County. This family of viruses had not been found in birds before, although it has since been identified in ducks as well.

Testing 47 eagles from 19 states across the contiguous United States, the research team found that 32 percent harbored BeHV. Researchers found the virus in seven states, including several in the Midwest, but also in states as far apart as Washington and Florida. Eagles in Wisconsin were nine times more likely to carry BeHV than birds from other states, and the virus was 14 times more common in counties surrounding the Lower Wisconsin River than elsewhere.

Yet the presence of BeHV in birds collected outside of Wisconsin — none of which had been diagnosed with WRES — suggests the virus may not be responsible for the enigmatic disease, or that the story is more complex.

“Is BeHV the cause of WRES?” asks Goldberg. “Or is it more complicated than that?” 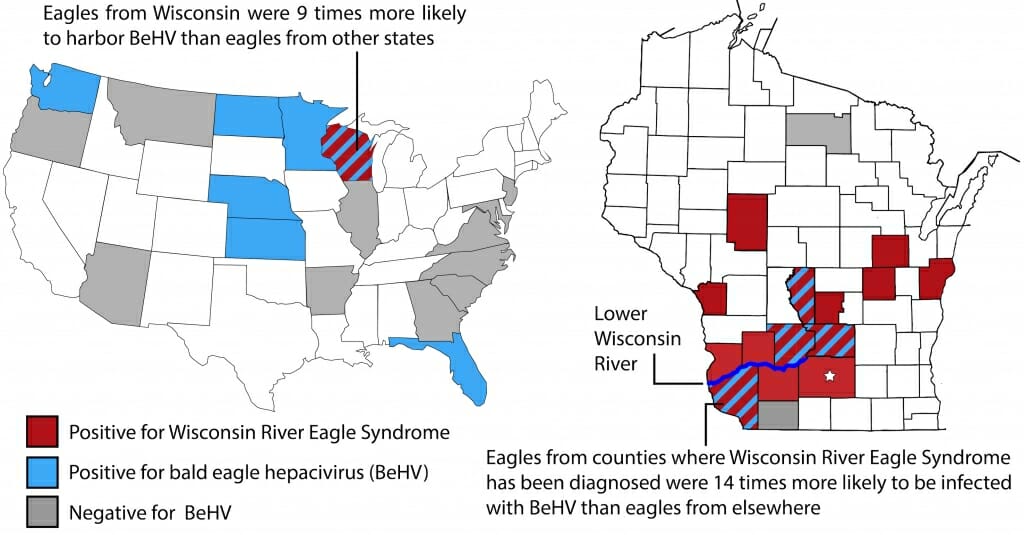 There is a long list of possible explanations. Infected birds may be more likely to die of starvation or other illnesses before they show symptoms of WRES, but eagles collected from outside Wisconsin did not show the liver damage characteristic of WRES.  It’s also possible that the prime conditions near the Wisconsin River allow birds to survive long enough for the disease to progress to its end stage.

“It is curious that the liver pathology of the eagles resembles the damage to human livers caused by hepaciviruses,” says White, branch chief for wildlife epidemiology and emerging diseases at the USGS National Wildlife Health Center. “But since the lesions are nonspecific there’s more that needs to be explored if we want to understand the virus itself or really get at what is the cause of WRES.”

The virus and the syndrome do not appear to endanger the resurgence of the bald eagle, which was removed from the endangered species list in 2007 after recovering from a low of 412 nesting pairs in the contiguous United States. There are now about 1,700 nesting pairs in Wisconsin alone.

“We don’t think this virus is having a serious impact on the bald eagle population, but the fact that WRES is an unknown condition keeps our interest,” says Strom, an environmental toxicologist with the DNR. “This study is another piece of the puzzle. Hopefully we can find more pieces and figure out what is happening.”

“This study has opened our eyes to glaring knowledge gaps about infection in a species of great national importance,” says Goldberg. “It’s a more complicated story than we thought it might be at first, but that makes it more interesting.”

This work was supported in part by the U.S. Geological Survey (award number G14AC00364).