Gail Ford calls it the “ripple effect” of precollege programs.  She benefited from it herself as a teenager in Detroit.

The fifth oldest of 11 siblings, Ford started tagging along on college visits and to career fairs with a sister enrolled in a college preparation program connected to Ferris State University, a public research university in Big Rapids, Michigan.

Ford never ended up in a precollege program herself, but the seed had been planted.

“Without that exposure through my sister, I don’t know that I would have ended up in college,” Ford says. “That’s the ripple effect a precollege program can have on a family. It becomes an educational opportunity for everyone in the house.” 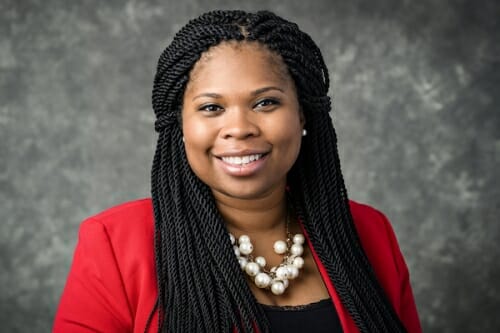 “I love this program and I love the work we all do here together,” says Gail Ford. “We are going to be the premier college access program for student success in the country if I have anything to say about it.” Photo: Bryce Richter

Today, Ford has more than 15 years of progressive leadership in the college access field, nearly half of them at the University of Wisconsin–Madison with the Precollege Enrichment Opportunity Program for Learning Excellence (PEOPLE). On Oct. 15, she became director of the program. She had been assistant director the last four years.

“We are thrilled to elevate new leadership, vision and strategy to ensure the success and sustainability of the program moving forward,” says Cheryl B. Gittens, assistant vice provost in the Division of Diversity, Equity & Educational Achievement, which houses PEOPLE. “Gail brings strategic leadership, innovation and the communication savvy that will strengthen the management, development and growth of our precollege enrichment and college student success brand.”

The mission of the program is to prepare Wisconsin students to succeed in the UW System, with an emphasis on UW–Madison. The program was recently redesigned to focus on four areas: build and master academic knowledge; develop cognitive strategies; build self-management skills; and discover college life through experiential learning. The program’s target population is students who traditionally have been overlooked or underrepresented in college admissions, including low-income students, first-generation college students and students from minority groups.

The support Ford enjoys from her co-workers was evident a few days after she became director. Staff members lured her into a meeting room to celebrate her new appointment. The surprise lunch included her favorite dessert: cupcakes from Carl’s Cakes in Sun Prairie.

“I love this program and I love the work we all do here together,” she told them. “We are going to be the premier college access program for student success in the country if I have anything to say about it.”

As she continued, Ford alluded to challenges faced by many students of color on campus. Earlier in the semester, a diversity-lacking student homecoming video provoked anger and prompted protests among many students on campus. The effects have been felt by PEOPLE scholars, Ford said.

“We all know this campus has had some issues with students of color feeling welcome,” she told the PEOPLE staff. “I want this program to be a strong support for these students, because we know it’s a real barrier.”

In an interview afterward, Ford said it should never be the responsibility of any one program or department to make a campus more welcoming.

“We all know this campus has had some issues with students of color feeling welcome,” Ford told the PEOPLE staff. “I want this program to be a strong support for these students, because we know it’s a real barrier.”

“I don’t want to remove the responsibility from others,” she says, “yet one of the areas where I feel our voice can be really strong is in giving students the tools to navigate and validate their experiences until those tools are no longer needed.”

Looking back on her high school years, Ford says she would have been the ideal candidate for a precollege program. She was motivated to learn and to attend college but didn’t have the “how” or the resources. She entered the foster-care system, she says, after her parents became caught up in the crack epidemic. Later, her 72-year-old maternal grandmother adopted her and six of her siblings. Today, she is close to her parents and sees their condition as an illness that should have been treated as such.

“They had the foresight to recognize that they couldn’t give us what we needed at that moment and allowed someone else to provide what they couldn’t,” she says. “I think that’s the ultimate display of love.”

Ford ended up enrolling at Ferris State and earned a bachelor’s degree in 2008 in applied speech communication. While there, she became a student leader who traveled to other cities in Michigan to urge high school students to consider higher education.

It was her entrée into what has become her life’s work. Early jobs found her working as an after-school program manager for a nonprofit organization and as a special projects officer for Madison College. In 2014, she earned a master’s degree in adult education from UW–Platteville, with a concentration in human services.

In 2015, Ford was invited to the White House by the Obama Administration to attend the first “Beating the Odds Summit” to promote the enrollment of underserved populations in college. Two PEOPLE students accompanied her on the trip.

In 2017, Ford was named “A Woman to Watch” by Brava Magazine. She also is a motivational speaker and has worked with organizations such as The Black Women’s Leadership Conference, Group Health Corporative, and American Family Insurance Dream Bank.

“All of that background informs my work every day,” she says. “That lived experience is kind of my secret sauce as far as how I plan to operate as director. There are so many things that can derail college success for the students we serve. I know what that feels like. My push is always going to be to give these students the experiences that allow them to have the best chance at self-sufficiency and success.”