Title: Reginold Royston joined the Information School faculty as the Anna Julia Cooper Postdoctoral Fellow with a joint appointment in the Department of African Cultural Studies. He began teaching as an assistant professor this fall. 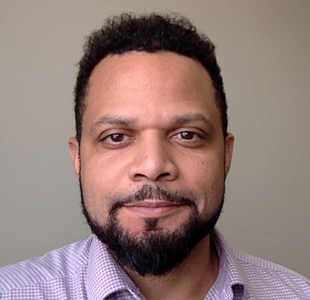 Describe the career path that lead to you Madison: I’ve worked as a journalist since I was a teenager. I’ve been a reporter, a graphic designer and an editor for organizations such as Knight Ridder, Village Voice Media and National Geographic Online. At some point, I felt the questions I wanted to tackle about technology, identity and representation could not be addressed while working in mass media, so I applied to graduate school at UC Berkeley. I studied in the African Diaspora Ph.D. program and at the Berkeley Center for New Media.

Given your academic background in African Studies and new media, what is the role you see technology/informatics playing in the communities you study? All academic fields will be impacted by the spread of digital culture and tools, either in content or form. I do research in Ghana, West Africa. Africa as a whole has had the highest rate of mobile phone adoption year-to-year for the past 10 years. Africa will be a leader in the mobile Internet, and is already leading with mobile payments. Network divides still persist, however. We in the West have a lot to learn about best technology practices in other parts of the world.

Please tell us about a goal or two you have in your positions at the iSchool and with the Department of African Cultural Studies: I’m looking forward to developing “maker” projects with students in the classroom, and nurturing future doctoral students in their fieldwork. Learning ethnographic technique is something I encourage all future tech developers to focus on. I hope to be finished with my book on the African Mediascape in the next year or so. I am also very interested in civic app design, and want to see what the Madison tech community is doing.

What is your favorite part about living in Madison? It’s really a beautiful and cozy place. From our views of the lake at the iSchool to looking up at the Capitol building every day, there’s a lot of inspiration around us.