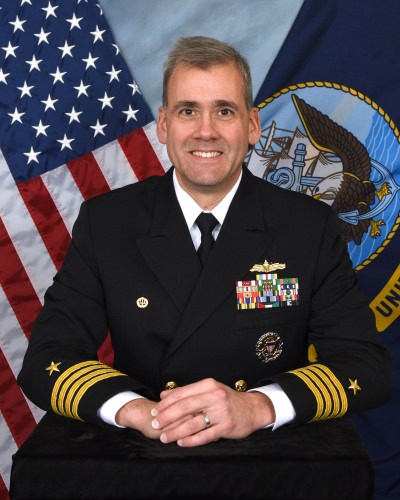 Previous position: Most recently I was attached to the U.S. Navy Headquarters Staff in the Pentagon, and was the Director of the Foreign Direct Investment Branch and of the Navy Operational Energy Office.

What attracted you to UW–Madison? After 27-years in the Navy, and this being my final tour of duty in uniform, I wanted to return to the Midwest, if possible.  (There’s not much Navy where there isn’t much salt water…)  More importantly, having matriculated through NROTC, I desired to return to the program that started my career in the Navy, and do my part to ‘train my reliefs’, and send best and fully qualified junior officers to the Fleet.  NROTC Wisconsin provided an opportunity to do both.

What was your first visit to campus like? After being slated for this assignment by the Navy, in summer of 2016, my wife and I visited Madison in September 2016.  The weather was rather delightful – warm, but with a hint of autumn in the air.  The campus and city were abuzz with the start of the fall-term – and it felt busy, but welcoming.  My wife immediately fell in love with the area.

Favorite place on campus? Having arrived only in August, I haven’t yet had the opportunity to explore widely, but I am partial to the path that runs along Lake Mendota, from the Union Terrace to Picnic Point. Beautiful, and a great place to run, walk and think.

What are you most enjoying so far about working here? It would be difficult to choose any singular aspect, so here are several – in no particular order.  The area appeals to my Midwestern upbringing, I feel like I have come home.  The University of Wisconsin, is admittedly quite a large institution, but feels warm, personal, and welcoming despite its size.  The academic excellence and gravitas of Wisconsin – in my estimation – place it easily on-par with the Ivys, Stanford, George Washington, and other ‘traditional’ top-tier universities.

Do you feel your work relates in any way to the Wisconsin Idea?  I am charged, as the Commanding Officer of the NROTC unit, with executing the following mission: To develop future Officers mentally, morally, and physically, and to instill in them the highest ideals of Duty, Loyalty, and the Core Values of Honor, Courage, and Commitment in order to commission college graduates as Naval Officers who possess a basic professional military background, are motivated toward a career in the Naval Service, and have a potential for future development in mind and character so as to assume the highest responsibilities of Command, Citizenship, and Government.

The final phrase of that mission statement comports well with what I understand to be the Wisconsin Idea.