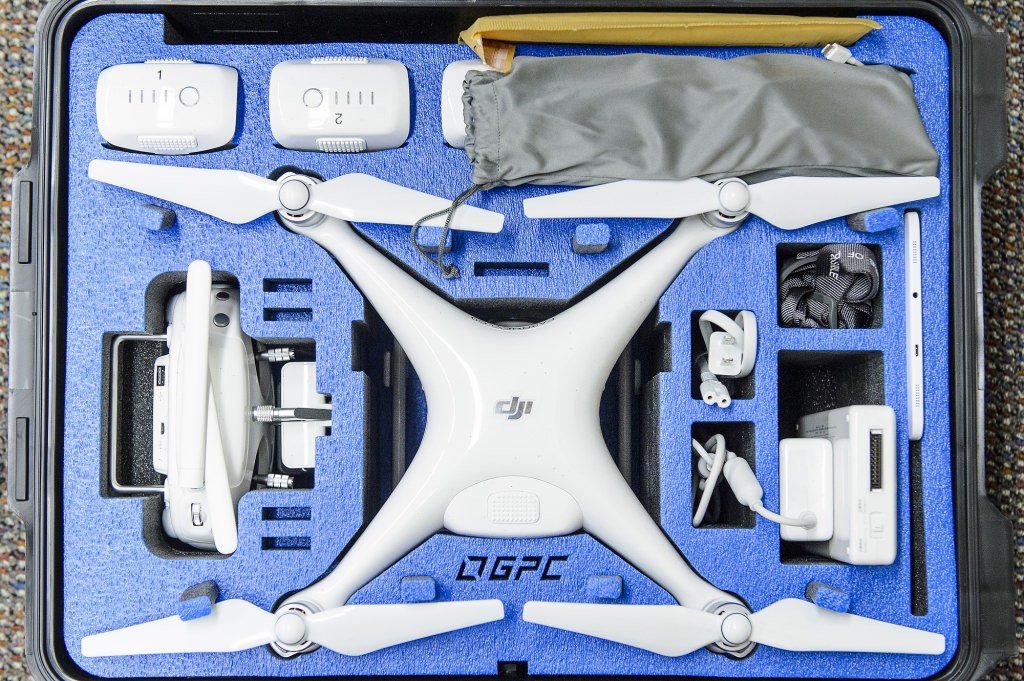 The drone that students use in the course (shown above), three extra batteries, tablet computer, extra propellers and case, costs a total of $2,500. Photo: Bryce Richter

This summer, the University of Wisconsin–Madison College of Engineering added a new way for students to navigate the skies: a course on drones.

The first of its kind at UW–Madison, the class will teach students how to fly unmanned aircraft systems (UAS), or drones, and the practical applications of the technology, said Chris Johnson, instructor of the new course.

The course, called “Introduction to Unmanned Aircraft Systems,” course number EMA 601, was created by Johnson this past spring and is being offered by Engineering Physics. Johnson submitted the new course proposal to the UW College of Engineering Education Innovation Committee Jan 25, 2017 and was awarded a $40,710 grant March 31 to pursue it. Johnson’s proposal was selected from 6 different proposals, Barry Van Veen, chair of the EIC committee, said. 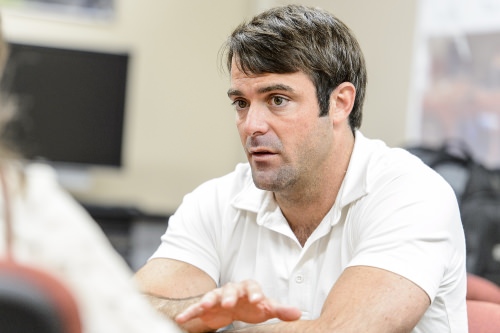 The new course wouldn’t have been possible had it not been for Chris Johnson. Johnson and colleagues began building the course March 31, 2017 as soon as they were notified that they won the grant money. Photo: Bryce Richter

Johnson is director of the UW Flight Lab in Industrial & Systems Engineering, and a program specialist in unmanned aerial systems.

There are eight students taking the summer class, which started May 30. Johnson said this is a small enough group to give the course material a trial run, but large enough to still make a big impact on campus.

James Blanchard, UW Engineering’s executive associate dean, said given the rapidly growing use of drones, it’s useful for students to learn about their capabilities. The class is expected to return this upcoming fall, spring and continue into semesters after that, Johnson said.

Overall, Johnson said there has been a lot of interest in the class and drones in general, something he sees as encouraging.

“Most people are completely enthralled by the technology,” Johnson said. “It’s really refreshing to see because there is a lot of value that can come from it.”

In the first half of the course, students learn how to operate drones safely and ethically by gaining an understanding of the technology itself as well as the laws and regulations surrounding drones, Johnson said. The midterm exam is a certification exam sanctioned by the Federal Aviation Administration, which when passed allows students to operate drones for commercial purposes.

The second half of the course teaches students about the business and engineering applications of the technology and uses of the data, Johnson said. Part of that learning process is completing a project to explore various industry applications. Students have to collect data using the drones and process that data to create an end product for a company. Johnson said he already has a list of around 12 companies that are willing to work with students, which could lead to an internship. 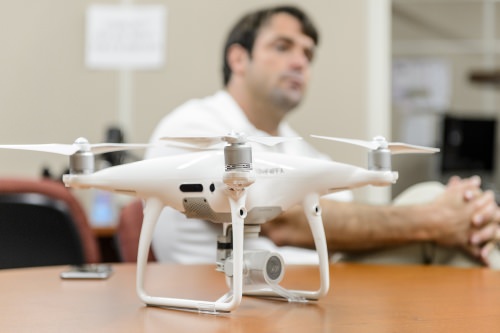 Blanchard said other examples of uses for drones include cell phone tower maintenance and surveying of pipelines.

“This industry is very immature, but it’s poised to boom,” Johnson said. “The companies that are taking advantage of the technologies are the innovators — they’re the first movers — because they realize the huge economic upside to employing these drones.”

One of the limitations that face drones right now is that the technology is moving faster than the regulatory environment, Johnson said. Drones currently have the technological capability to perform many of these practical applications, but are not allowed to because it is against the law to fly drones beyond the line of sight. These regulations are keeping the “economics from exploding,” Johnson said.

Johnson said some laws and regulations are important for preserving people’s personal rights to safety and privacy. He said he wouldn’t want drones to be used in a way that would jeopardize people’s privacy or put someone in danger, and he stresses that point with students.

“Myself and the people I surround myself with never advocate for this technology based purely on an economic benefit if it compromises people’s safety and ethics,” Johnson said. 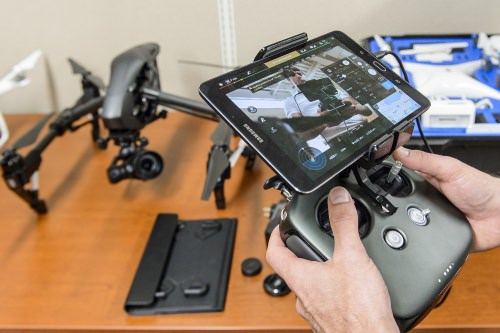 Drones are controlled by a remote that is held by the operator. Right now, it is illegal to fly drones farther than line of sight. If the laws change and communications technology improves, drones could be flown even further. Photo: Bryce Richter

It’s only a matter of time until the appropriate laws and regulations are figured out, Johnson said. After that, drone use will continue to grow, he said. In the future, he thinks drones will be able to fly autonomously and be used for delivering packages, something Amazon has been advocating for.

Johnson said he hopes to have more drone courses down the road, and even develop a major for unmanned aircraft systems. He said this will poise students for the future.

“Drones are already constantly at work collecting data,” Johnson said. “They’re not to the point where they’re delivering packages, but they will be.”