Poverty in Wisconsin hit its highest level in 30 years during a five-year period that ended in 2014, according to a new analysis by the University of Wisconsin–Madison’s Applied Population Laboratory.

“The data tell us that poverty has been getting worse in Wisconsin,” says Malia Jones, an assistant scientist and social epidemiologist at the lab. “Poverty went up significantly, even during a time when the nation’s economy was improving.” 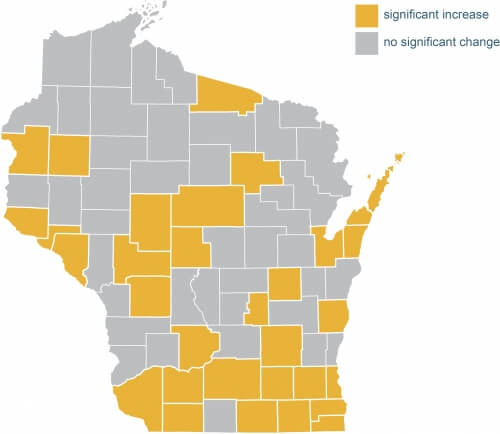 Poverty in the 2010-2014 period increased significantly in 31 of the 72 Wisconsin counties, including 11 of our 15 most populous counties. No county had a significant decrease. Applied Population Laboratory

The analysis compared U.S. Census Bureau data from 2005-09 to numbers from 2010-14 and found that the number of state residents living in poverty hit 13 percent during the five years ending in 2014 — the highest rate since 1984.

During the most recent five-year span, poverty increased significantly in 31 of 72 Wisconsin counties, including 11 of the 15 most populous counties. Estimates show that about 738,000 Wisconsin residents were living in poverty, compared to 605,000 in the previous five-year period.

The uptick was also reflected in the number of Wisconsin children touched by poverty. The analysis showed 18.5 percent of children in Wisconsin, or about 239,000 statewide, were living in poverty — up from 14.6 percent in 2005-09. Only 10 states had faster rates of increase in child poverty than Wisconsin, according to the lab’s analysis.

“Children’s exposure to poverty is a real health concern,” says Jones. “That’s the group that epidemiologists worry about most. There is some good evidence that living in poverty and experiencing issues like food and housing insecurity can cause changes in the brain that can lead to behavioral issues and low performance in school, as well as chronic disease later in life.” 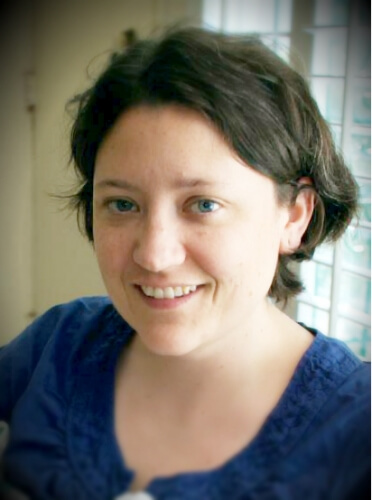 The analysis also found other unsettling trends in poverty across Wisconsin.

Racial divides were clearly evident in the data, as Wisconsin’s poverty rate for blacks was 39 percent and 28 percent for Latinos, compared to 11 percent for whites — significantly wider than the gaps for the rest of the country. Nationally, the analysis reported that the gap between blacks and whites was 16 percentage points and for Latinos and whites it was 13 percentage points.

“It is getting worse despite some recent efforts to address disparities,” says Jones, who adds that she hopes the lab’s findings help inform policymaking decisions at all levels.

Poverty rates were also up across every level of educational achievement during the five-year period. For those with less than a high school education, poverty rose from 20.5 percent to 24.5 percent, but the impact was mitigated by a decrease in the total population with very low educational attatinment, which dropped from 380,000 to 337,000. 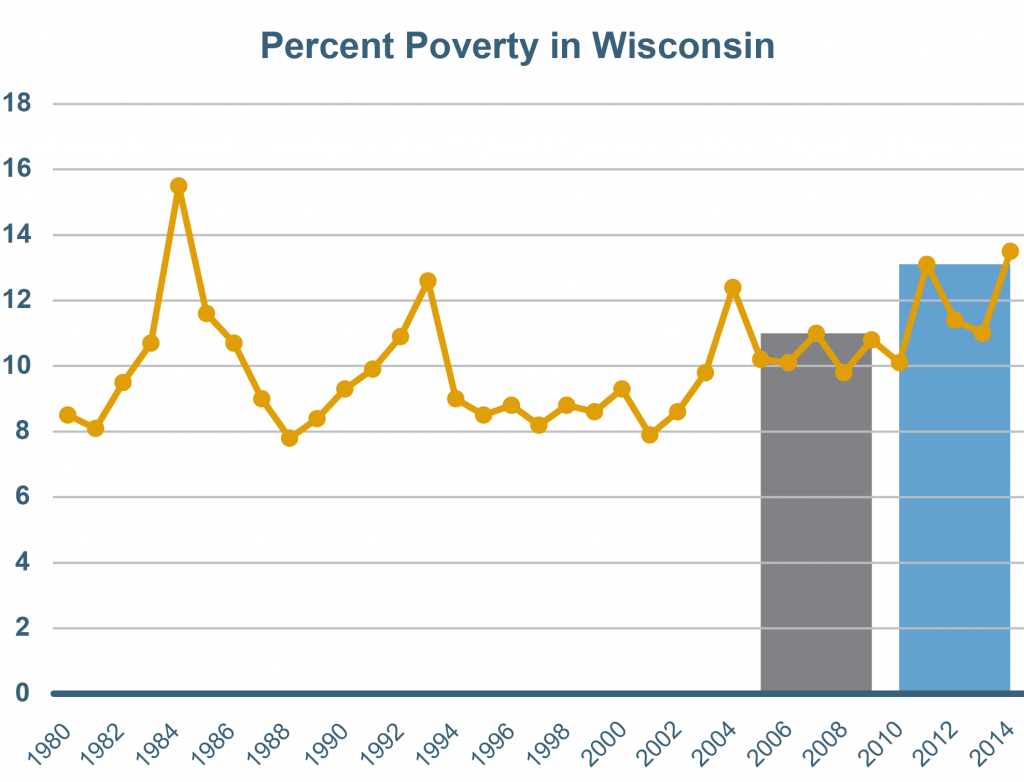 The number of people living in poverty reached 13 percent across the five years ending in 2014—the highest poverty rate for the state of Wisconsin since 1984. Applied Population Laboratory

“We think of college-educated people as those who can most readily benefit from an improving economy, so that surprised me,” Jones says.

The analysis also found that poverty cut across various levels of employment in Wisconsin. Among those who were unemployed, poverty increased from 27 percent to 31.6 percent. But increases were also seen among the working poor. The data show that poverty among employed adults rose from 6 percent to 7 percent and increased among those employed fulltime from 2 percent to 2.4 percent.

The Applied Population Lab is housed in the university’s Department of Community and Environmental Sociology in the College of Agricultural and Life Sciences. Several staff and faculty in the lab have UW-Extension appointments and play a key role in carrying forward a program of demography for UW-Extension.

The lab’s report on Wisconsin poverty can be found at http://go.wisc.edu/apl_wi_poverty_report.