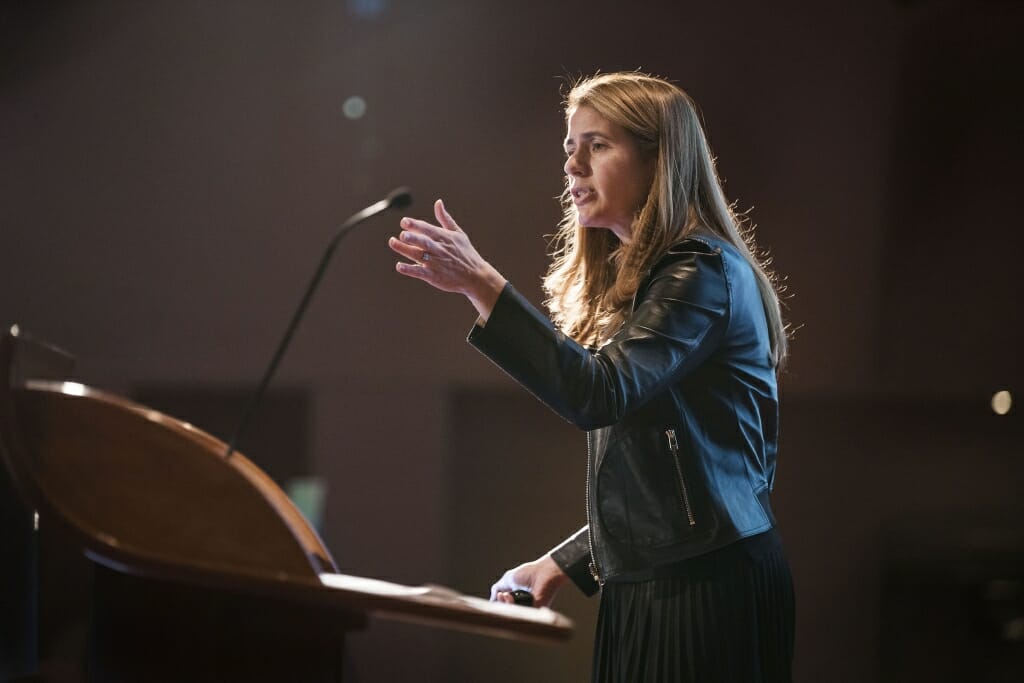 Guelay Bilen-Rosas, an anesthesiologist at the University of Wisconsin School of Medicine and Public Health, spoke about the need for a better way to monitor breathing function during sedation at WARF Innovation Day on Nov. 5, 2019. Photo by Wisconsin Alumni Research Foundation

The need for an accurate, automatic device to check that sedated patients are getting enough airflow has led to a breath-monitoring technology at the University of Wisconsin–Madison.

The idea sprouted three years ago in the mind of Guelay Bilen-Rosas, an assistant professor of anesthesiology at the School of Medicine and Public Health.  Despite her deep expertise, she had gnawing doubts. Once she administered anesthetics that impaired the ability to breathe, she became the patient’s lifeline.

But she could not conclusively answer the one vital question: were they getting sufficient airflow and oxygen?

The common finger-tip blood oxygenation instrument can be several  minutes late in warning about the onset of oxygen deprivation, Bilen-Rosas says, and patients can quickly go downhill with symptoms such as heart rhythm changes and stroke.

Too often, the outcome is brain damage or death.

Yet every gauge or algorithm she could find was too slow to detect the problem or had other drawbacks. At issue, Bilen-Rosas clarifies, is patients without a breathing tube, which ensures air flow when connected to a ventilator.

Although her experience gave her a sixth sense for a patient’s condition, she had difficulty transplanting her wisdom to her students at UW–Madison. “I would tell them, ‘Do you see the chest moving? Look at this.’ They are listening, but not really comprehending. I felt like a failure. I could not help them answer the most important question: Is our patient breathing OK?”

And as a pediatric anesthesiologist, she knew the parents were likely in the waiting room. Yet the tiny breath volume of a premature baby is hard to detect.

After listening to his wife’s rising frustration with the state of the art, husband Humberto Rosas, an associate professor of radiology at UW–Madison, made a radical suggestion: “If you’re so passionate about it, why don’t you do something about it?”

But Bilen-Rosas could not find such a monitor to buy. “The things out there could not capture the entire picture of breathing, and they all had limits,” she says. “They were invasive, or would need too much apparatus, or use radiation.”

However, she uncovered industrial flow-measuring systems, and at Humberto’s suggestion, homed in on ultrasound technology. The Rosas learned that the instruments used to image internal organs or babies in the uterus can detect subtle changes in the lining of the trachea as air moves through it.

The Wisconsin Alumni Research Foundation applied for a patent on the discovery in 2016.

“In Fall 2018 we had our first human results on healthy volunteers,” Bilen-Rosas says, “and we were about 90 percent accurate compared to spirometry, a propeller-based system that is not a viable option for patients under sedation.” 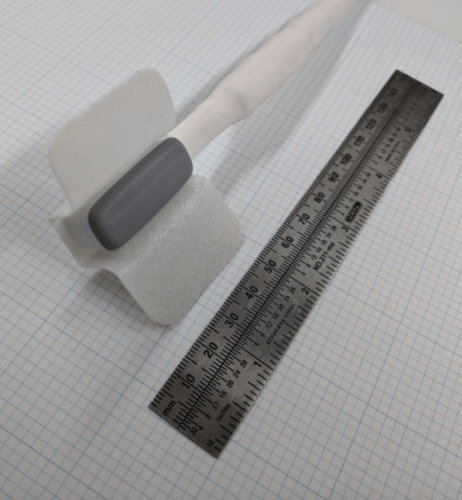 A prototype system under development by Bilen-Rosas and collaborators at UW–Madison measures airflow in real time in sedated patients. This ultrasound device would be taped to the patient’s neck. Photo by Guelay Bilen-Rosas

In 2019, research on a prototype ultrasound instrument that is taped to the neck moved to cataract surgery patients at the UW–Madison School of Medicine and Public Health. “We found proof that we can quantify how much air is moving during the sedation,” Bilen-Rosas says.

As the system was being tested, the data were not used for medical decisions, Bilen-Rosas specifies. Clinical use must await Food and Drug Administration clearance as a medical device.

The research was supported by the WARF Accelerator Program funding — a mechanism that supports cutting-edge research.

National statistics for deaths from sedation-associated airway problems do not exist, Bilen-Rosas says. Extrapolations from a dental-surgery registry in Texas suggests that 1,000 dental patients per year die across the nation, but the broader and larger impact is unknown: “If you cannot quantify the problem, how can you improve on it?” she asks.

Once a solid system for monitoring airflow emerged, the uses started to expand. “This went, from, How can I teach better in the OR, to applications in the ICU. And when patients arrive at the ER, you don’t always know how well they are breathing.”

After surgery, she notes, patients are prone to breathing complications during recovery because of traces of anesthesia in the system. And as outpatient and office-based surgery gain acceptance, sicker patients are in environments with lesser regulatory standards, and at times without access to an anesthesiologist, a specialist in airways.

The ultrasound device could even be used to detect and monitor obstructive sleep apnea, Bilen-Rosas suggests.

The Rosas have not yet formed a company, but that time is approaching, and a growing number of collaborators have joined the effort. “You cannot become great in life by thinking you are the one who is doing it all,” Bilen-Rosas says. “You need people who believe in what you believe in.”

Irene Ong, an assistant professor of obstetrics and gynecology, is using machine learning strategies to analyze data from the new detector.

“I want this technology to make a difference – in medical education, in the clinic, in people’s lives,” says Bilen-Rosas, with characteristic passion. “We can do no less. Our patients are trusting us with their lives.”