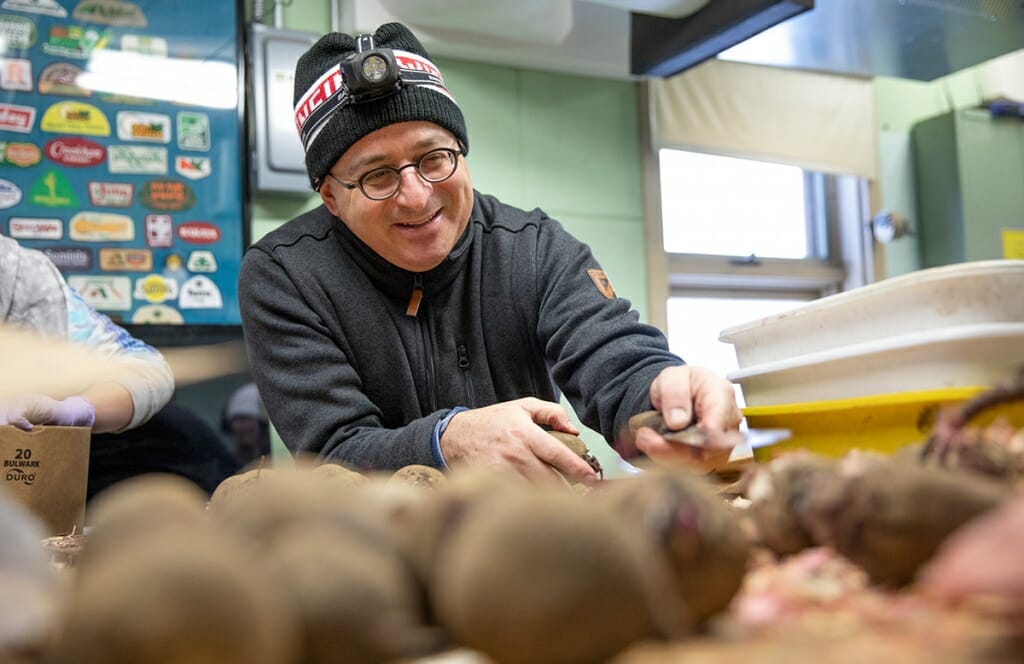 From February through June, we will be highlighting the ways that UW–Madison changes lives for the better throughout the state of Wisconsin. March’s theme is Working for Rural Wisconsin. Watch for more at #UWChangesLives on social media. And here’s how you can help.

Professor Irwin Goldman is a champion for the beet, which, honestly, needs one.

“If you talk to consumers about beets, you’ll find a few people that say they love them and can’t get enough of them, but you’ll find many more who say, ‘I can’t stand them because they taste like dirt,’” says Goldman, chair of the horticulture department.

Goldman is a plant breeder and geneticist who focuses on carrots, onions, and beets. He’s also a popular teacher and a long-time regular guest on Wisconsin Public Radio’s “Garden Talk,” one half of the veggie expert duo known as the “Vicars of Vegetables.” Two beets from one of the Goldman Lab’s experimental breeding lines. UW-Madison

Beets contain geosmin, a compound with a distinctly earthy smell and flavor. It’s the same molecule responsible for the aroma of freshly plowed fields and newly turned garden beds.

Goldman’s beet breeding program, however, has come up with some new options for people who don’t dig the earthy pungency of the typical beetroot. And his team is developing more.

These options are the result of a career that has taken some surprising turns over the years. After starting with a focus on serving the traditional beet industry, Goldman’s program abruptly expanded to include culinary beets for gourmands and foodies. He also set out to develop an un-beet-y beet, something a kid could like.

Beets were originally cultivated in the Mediterranean region as a leaf crop. The plant’s greens were harvested for salad while the small, bitter roots were largely ignored. Over time, pushed by the need for crops that could overwinter in more northern latitudes, people selected for larger and larger root size, eventually creating the swollen, durable root of the modern table beet. 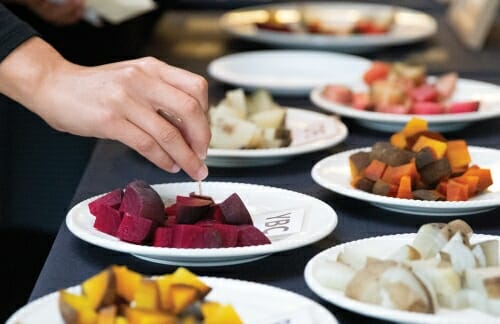 Attendees assess samples of cut and steamed beets during the Farm to Flavor dinner at UW’s Discovery Building. UW-Madison

Table beets are a healthy food, high in fiber, folate, and vitamins A and C. Eastern Europeans brought beets with them when they immigrated to North America in the 1800s and early 1900s, along with carrots, onions, and other root vegetables.

“Root vegetables are the simple, staple peasant food of Eastern Europe,” says Goldman, whose own family tree goes back to rural Belarus. “They are really like part of my family.”

Wisconsin has a long history of vegetable canning, including peas, corn, cabbage, snap beans, and beets. Today, Wisconsin is the nation’s top producer of table beets. State producers grow more than 50 percent of the country’s crop, and the majority of the harvest is processed for canning. 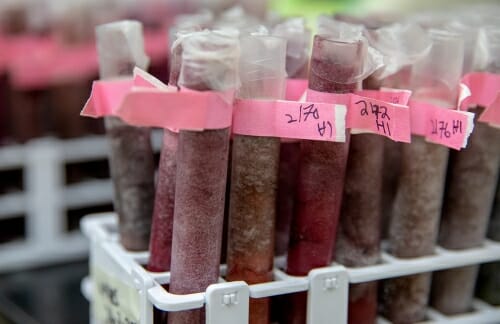 Tubes of frozen beet slurry sit in a rack before they are thawed and prepared for gas chromatography mass spectrometry analysis in Horticulture/Moore Hall. UW-Madison

This makes beet a minor crop, and, as such, there aren’t many plant breeders working to improve it. Right now, Goldman is the nation’s only plant breeder at a public institution who works on table beets, making UW–Madison a key resource for all things beet research and breeding. This includes the development of new and improved varieties and serving as a repository for one of the world’s best collections of beet seeds.

“If you go to the store and buy a beet, or you order a beet dish in a restaurant, it’s almost certain to have its origin here in our program, which is cool,” says Goldman. “And it’s not that the [finished] varieties were bred by us, necessarily, but that we supplied the parent materials that companies used to make their commercial varieties.”

One constant since the beginning of Goldman’s career has been his work on agriculturally relevant projects to support the beet industry.

One of his first projects as a new faculty member involved continuing his predecessor’s efforts to develop high-pigment beets for the production of natural food dyes, a collaborative project with UW–Madison food scientist Joe von Elbe. Goldman and von Elbe, with the guidance of the Wisconsin Alumni Research Foundation (WARF), went on to found a spin-off called Phyto Colorants to make these pigment-saturated beets available to industry.

Dyes derived from the company’s beets are now used by national food companies to color ice creams, yogurts, chips, and candies, among other products.

A new project involves developing table beets that are resistant to Rhizoctonia, a soil-borne fungus that is considered a major scourge of the beet industry. Infected beets develop areas of black, dead tissue, which leads to a lot of food waste during processing.

It’s the perfect project for a public plant breeding program. While industry is eager for the fungus-resistant beets, it may take 10 years or more to complete the project.

“We can take on riskier and more long-term projects here, things that private companies can’t do because they need a more immediate return on investment,” notes Goldman.

Goldman’s beet program took an unexpected turn in the late 1990s — thanks in part to the preferences of a celebrity lifestyle guru.

“Martha Stewart began incorporating beets into her recipes, and then it was in Gourmet magazine and Bon Appétit and Cook’s Illustrated,” says Goldman, who shortly thereafter started fielding phone calls about beets — where to buy them, how to grow them, how to cook them.

“[There developed] a whole community of people interested in beets,” he says. “I think about beets as this old-fashioned root vegetable, as peasant food. But now they’ve got this high-end, fancy culinary thing going on,” he says. “There’s been this beet renaissance, and it’s still happening. It’s been wonderful.”

When this renaissance started, Goldman decided that he wanted to try to develop a beet that his own kids, as well as other beet-averse folks, would enjoy. This launched a 15-year odyssey to develop his Badger Flame series of beets — Badger Flame, Badger Torch, and Badger Sunset — which were released as finished varieties in 2012. These beets, developed in partnership with UW–Madison vegetable breeder Nick Breitbach, are oblong with vibrant yellow, orange, and red interiors. And they’re designed to be eaten raw.

“When you give somebody the Badger Flame beet, you can peel it, and you can just chomp on it like a stick of jicama,” Goldman says. “It’s sweet and crunchy with about as much earthiness as spinach. So you get that hit of sucrose and not the hit of the soil.”

Badger Flame beets are proving quite popular as far as culinary beets go. The seeds are available for purchase through Row 7, a specialty seed company founded in 2018 by Dan Barber, award-winning chef at Blue Hill at Stone Barns in New York. In February, The New York Times featured the company, which led to a boost in seed sales.

Goldman works with WARF to release the new beet varieties he develops that have commercial potential as well as new inbred lines that seed companies may want to use to produce new hybrid varieties. When companies license his germplasm, the resulting royalties help support more research and breeding.